For an intro to this series, see the Pregame Show. If you're nostalgic for the previous year's team, peep The 1999 Project.

July 8: A rainout at Yankee Stadium in June necessitated this, a day-night two-stadium double header. It was the first such even in any city in almost 100 years. What should have been an enjoyable day for fans and players alike turned into a nightmare for the Mets. 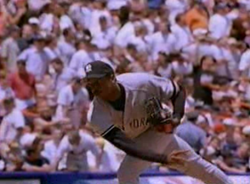 The first game, held at Shea, saw Doc Gooden return for the first time since he'd left the Mets after the 1994 season. Despite his uniform, he took the mound to a hearty reception from Mets fans. The Yankees had picked him up after he was released by Tampa Bay, and he'd been pitching in the lowest rungs of the minor league ladder before getting called up to pitch this game. If things went poorly, it could well be his last major league start.

The verdict: Gooden was good enough. He only managed one strikeout and lasted just five innings, but that sufficed in a 4-2 Yankees win. He left the game with the score tied, but Tino Martinez untied it with an opposite field home run, then tacked on with another RBI in the top of the eighth. Gooden would managed to stick around in the Yankees' rotation, rendered vulnerable by injury and ineffectiveness, for the rest of the season.

The game began oddly when Chuck Knoblauch was seemingly thrown out trying to stretch a leadoff single into a double, but the umpires called interference on first baseman Todd Zeile--after basically being told to do so by first base coach/ex-Met Lee Mazzilli. Bobby Valentine argued the call and was ejected for his trouble. The Mets played the game under protest, for all the good it did them. The second game would inspire even more protest.

After a short bus trip to the Bronx, Glendon Rusch squared off against Roger Clemens. Even a casual viewer might have suspected something was brewing when Clemens pitched up and in to both Lenny Harris and Derek Bell in the first inning, but nobody could have guessed what would happen in the top of the second.

Leading off against Clemens, Mike Piazza--owner of .538 lifetime batting average against him--was drilled in the helmet with a 92 mph fastball. Piazza crumpled to the ground and stared at the sky, glassy-eyed, as trainers rushed out to attend to him. Clemens stood on the mound defiant, almost oblivious to what he'd just done. Mets coach John Stearns, noting that Clemens had almost hit Harris and Bell, gestured at him angrily with two fingers. 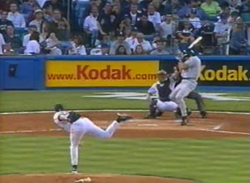 The catcher left the field under his own power, but would be forced to sit out the rest of this game, the Subway Series closer, and the upcoming All Star Game he was supposed to start. It was Piazza's second concussion in a month.

The rest of the game seemed almost beyond the point, though the Yankees would win for the second time that day, once again by the score of 4-2. Upon its conclusion, the Mets--to a man--thought Clemens had beaned Piazza on purpose. No one believed that one of the best strikeout artists of all time could miss that badly, particularly with a fastball. And no one thought it was a coincidence it should happen to Piazza, who'd burned Clemens with huge home runs every time he'd faced him in Subway Series games.

"It's one of the worst things I've ever seen in baseball," said Piazza's backup, Todd Pratt. "I lost a lot of respect for Roger Clemens." As a catcher in the Red Sox organization, Pratt had caught Clemens in the past. "I remember some of the things he did," he said. "Throwing over guys heads and hitting guys and I kind of overlooked it. Then yesterday..."

"It seemed to me like if Clemens was concerned, he should have walked up to Mike and asked him if he was all right," Lenny Harris said. "He just stood there. That was bad." Mike Hampton noted, "If Mike doesn't duck, it hits him right between the eyes. That would be death."

After a trip to the hospital, Piazza himself said he too believed Clemens' beanball was intentional, and that he too had lost all respect for him. He also said, all things considered, "I consider myself fortunate."

He added, "[Clemens] is going to the Hall of Fame. He doesn't have that bad control." Valentine protested that if Clemens intended a brushback pitch, it should have been aimed belt-high or letter-high. And he was furious that even though both sides were warned about further brushback pitches after Glendon Rusch hit Tino Martinez, Clemens threw another high-and-tight ball to Bell later in the game. "Sounds like three for one to me."

"So your teammate got hit on the butt with an 86-mph fastball," Valentine said, referring to Rusch's retaliatory pitch. "The way the manager rolled his eyes let you know, he was really saying, 'So what?'"

On the other side, Joe Torre tried to defend his pitcher, but did a curious job of it. He insisted the beaning was unintentional, but also pointed out that Clemens had hit plenty of Yankees when he was with Toronto and remembered how angry he'd been with him at the time. He also admitted that he'd be upset if he was in Bobby Valentine's shoes.

As for the rest of the Yankee clubhouse, the Piazza beaning was just another annoying distraction, something to get in the way of the business of playing baseball. Most of the team just seemed relieved the day was over, and talked as much about the long bus trip from Queens to the Bronx as they did about Clemens. When asked if there would be further repercussions, Derek Jeter asked, with typically Jeterian obfuscation, "Why wouldn't it be over?"