There's been some buzz about trading Carlos Beltran in the upcoming offseason. Tim Dierkes kicked it off almost a month ago, then MLBTradeRumors followed up with more thoughts, Jon Heyman speculated fairly wildly last week, and now we all get to squawk about it for months.

Is this a rebuilding team? If so, then it makes sense to trade Beltran, as it would probably make sense to trade Jose Reyes, Francisco Rodriguez and any other player that would either help restock the cupboard or shed salary from the team. Perhaps paying 80% of the contracts of Luis Castillo and Oliver Perez would help some team bring on those roster dead weights. Perhaps.

So, if this is a rebuilding team, then of course it makes sense to trade Beltran. And then it would make sense to pay whatever amount of his salary the team would need to pay in order to get an interesting package of prospects back. Then Heyman's beverage-snarfing number (the Mets will have to pay $15 of the $18 million in order to achieve a trade) is even okay, because - hey - at that point it's all about the young players coming back.

But we know about "rebuilding" and "New York." "It’s not a market where you can go young," said Omar Minaya famously. No worries about whether or not that's true - it seems that the fans just want to win and since they've been waiting more than twenty years, they might be fine with waiting a few more if the plan seems solid. The person in command thinks it's true, so it is... for now.

We've come back full-circle to the possible changes in management. If Minaya goes, would the next GM perhaps rebuild his team in his own image? Let's just say that idea is doubtful considering the things we have heard about ownership. Most likely, this team is in the image of its leader, and that leader is Jeff Wilpon. And as the check-signer, he's not going anywhere, either.

So this is probably not a rebuilding team. Then it really doesn't make much sense to trade him. Let's take a look at this from an overall player-value perspective.

We don't know what the projections will look like for Voltron, who has alternatively looked lifeless and rejuvenated since his knee surgery. He's had defensive gaffes and he's made leaping catches. Even those watching him work out, train, and play in person every day would be hard-pressed to prognosticate about how much Beltran the 2011 Beltran will be. (Judging from some fans, it seems that even 100% Beltran is not Beltran enough, but enough digression.)

Defense is tough to quantify, and usually you want two to three season to approximate a season's worth of batting. We don't have that. But it is interesting to note that Beltran's defense was slipping before the surgery, and that his UZR/150s in center field both before (-6) and after the surgery (-11.3) were both negative. No matter, the Mets have Angel Pagan to play center field most days, they just have to break it to the big guy eventually.

So, take Beltran's xBABIP for this year, and add back in those six hits he lost to luck - call them all singles - and you have a .280/.367/.459 line, or a .352 wOBA. Combined with scratch defense in the corner outfield, and that's something like a 3 WAR player over a full year. Not exactly a cheap player, given that wins are about $4-5 million per, but not grossly overpaid either. Does it seem worth paying another team most of that salary to get off the team? Probably not.

If you think that some combination of Lucas Duda, Daniel Murphy and Nick Evans can outproduce that WAR number, then you get rid of Beltran in order to save money. You get your 3 wins for $1.2 million + whatever you had to pay to get Beltran off the team. But can the team pay less than $14 million to the team taking on Beltran? Unclear. Can that group of young players put up three wins next year? Probably not.

Lastly, Beltran does have better upside. He might just be better than a scratch right fielder with an offseason of preparation and recuperation. If we use his UZR instead of UZR/150 (-3), then we actually get a +7 defensive right fielder, and closer to a four-win player. Beltran has surpassed that number in every full, healthy year but two in his career. Can Duda, Murphy and Evans get you four wins? Probably (definitely?) not.

Of course, all of this is moot if the team decides to get their rebuild on. But if the team wants to compete next year, they probably shouldn't pay another team to take a possible 3-4 win player off their hands, especially since he's not terribly paid. Start the meme now, it's not #BlameBeltran, it's #KeepVoltron.

Then again, if this is as bad as it sounds: 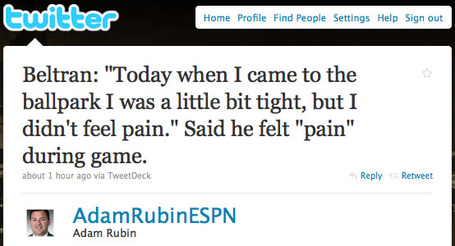 Then this will be true. 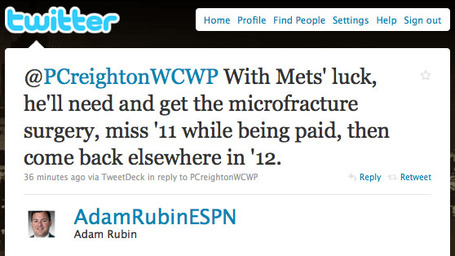 That would be just about the type of luck Mets fans would be used to, eh? And a further injury concern, even if the MRI he may have scheduled for today doesn't find anything, makes Beltran most likely untradeable. Then this conversation would be moot. At least the journey was interesting.