According to ESPN's Jerry Crasnick, the Mets might be interested in signing Dave Bush to join their rotation.

Add Dave Bush to the list of free-agent starters on the Mets' radar. J.P. Ricciardi was with the Blue Jays when team drafted Bush in the second round in 2002. Bush's velocity dipped about 2 mph last year, but he was second on the Brewers' staff to Randy Wolf with 18 quality starts.

The connection to J.P. Ricciardi may or may not mean anything, but the Mets did bring in Brad Emaus, a player drafted by Ricciardi, in the Rule 5 draft last month.

Bush made 30 starts for the Blue Jays across 2004 and 2005 before spending five seasons as a regular member of the Milwaukee Brewers' rotation. He turned 31 in November, and in 2010 he bounced back from an injury sustained in 2009 when his arm was struck with a line drive off Hanley Ramirez's bat. That he pitched 174.3 innings in 2010 is a good sign, especially since he admitted that he rushed his injury rehab twice in 2009.

Let's have a look at Bush's career ERA/FIP/xFIP: 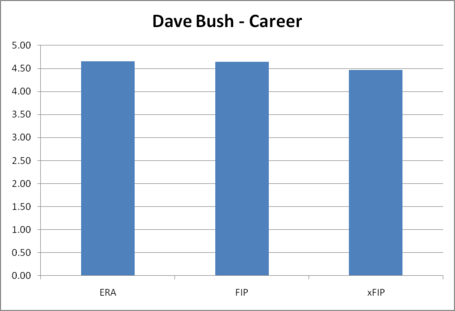 The Defense Independent Pitching Statistics (DIPS) are very much in line with his career ERA. Given these numbers, it's pretty clear that Bush is unspectacular but capable of hanging in a major league rotation.

Bush throws a mix of pitches: fastball, curveball, slider, cutter, changeup. One concern is the steady decline in his average fastball velocity over his career. In 2006, the pitch averaged 89.2 mph, but in 2010 it was down to 86.5 mph. Even though he was never a power pitcher, that dip is not a positive sign.

The other concern with Bush is that he earned $4.2 million last season. If he's willing to sign for half that amount, he could provide decent value at the back end of the Mets' rotation. If that were the case, the Mets could pencil in a rotation of Mike Pelfrey, R.A. Dickey, Jon Niese, Chris Capuano, and Dave Bush.