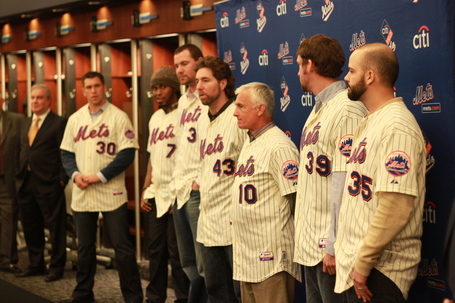 This afternoon, the Mets hosted an event for Citi Field Kids which gave a group of kids from Queens the chance to learn about the legacy of Jackie Robinson, visit the clubhouse, and ask questions of Jose Reyes, R.A. Dickey, Mike Pelfrey, Josh Thole, Bobby Parnell, Dillon Gee, and Terry Collins. The Mets invited Amazin’ Avenue to the event, and I gladly headed out to Citi Field to cover it.

When the Mets opened up the floor for questions from the kids, there were some great moments. One of the students asked, "what’s the hardest pitch to throw?" Terry Collins, pointing at R.A. Dickey, said, "he throws it." Dickey agreed, and he explained why that was the case. Another student asked if the Mets could hook him up with being a baseball player, and when they hesitated, he said, "so I guess that’s a no?" Collins explained to the kid that he’d be competing with these guys for their jobs a few years down the road, so they might not want to hook him up.

Once the Q&A with the kids was over, the Mets signed baseballs for each of them. While the kids went to eat lunch, the players and manager spent some time answering questions with us. I’ve included everything I was able to ask of the Mets below. My iPod recorder decided to give me white noise on the Thole/Parnell/Gee clip, but I’ve summed up what those guys said as best I can. It also bailed on me for my Terry Collins question, but thanks to Matthew Artus at Always Amazin’, I was able to transcribe that.

Chris: Terry, one of the things that was frustrating for Mets fans over the last couple of years was watching a guy like R.A. Dickey or Johan Santana battle to stay in a game but get pulled. How much weight are you going to give to a pitcher if he tells you he can stay in a game?

Collins: Well, you know, a lot of it, in the National League, sometimes situations dictate coming out of a game. And that’s the hardest thing for a guy who’s been an American League pitcher when they come to the National League is to realize it’s not their performance that dictates coming out. You know, if it’s 2-2 in the 8th and you got two outs and the bases loaded, hey, look, unfortunately, we gotta score to win. So those things happen.  I’ll tell you what’s going to dictate a lot – how long they stay in the game – is what the other team’s doing. If they’re starting to get balls centered, it might be time to come out, even though they feel fine.

You know, I’ve had those guys, too. I had one of the best pitchers in baseball Chuck Finley told me one day some nights 135 is easy and other nights 65 is hard. So we’ll certainly keep an eye on how the game’s going.

Chris: So in terms of the pitch count, it’s a flexible thing?

Chris: R.A, last year your walk rate, especially when you compare it to all the great knuckleballers in baseball history, you walked very few batters. How’d you do it?

Chris: When Angel Pagan said the other day he had a lot of faith in this team, it kind of went hand-in-hand with what everybody’s saying here today. And he said one of the reasons he thought you guys could compete this year was that when you’re healthy, you’re the best leadoff hitter in the game. How much does it mean to have a teammate come out and say something like that?

Jose: You know, it feels good, it feels good, but it’s not only me that stay healthy on the field. We’ve got some other key guys in this lineup who need to stay healthy, too, like Bay and Beltran. If every one of those guys and me stay healthy on the field, we still have a very good lineup so the only thing we’re going to miss is Johan Santana, you know, because he’s one of the best pitchers in the game, but we’re gonna have him at some point this year.

Chris: And are you glad that in addition to being the leadoff hitter, Pagan will be hitting behind you?

Jose: [laughs] We did that for a little bit last year, you know Pagan as the second hitter and me leadoff, so I’m glad that Terry said I’m going to bat leadoff because, you know, last year was kind of tough. When Jerry moved me to the third spot, I didn’t do too good there, so I had to move down to the leadoff spot.  So, I’m real happy about that.

Chris: Jose, is there any chance we’ll see Professor Reyes return this year?

Jose: I don’t know, we’ve talked about that (laughs and points to Mets staff), I don’t know yet, maybe, maybe not.

Chris: How do you feel with the signing of Chris Capuano, and it sounds like Chris Young will be joining the team, too. Does that give you a little more confidence?

Mike: You know, I thought the Chris Capuano signing went under the radar because I think that guy’s, I think he’s going to be great. He obviously, I think it was 2005, he had a huge year, he won 17 or 18 games. So I think that’s going to be a huge signing that went under the radar. I’m excited about that. Obviously, Chris Young had some very, very good years in San Diego, and if he’s healthy, I don’t know where the question mark is if he’s healthy. So I think we’re going to be fine, and even both of those guys aren’t there, Dillon Gee came up last year, and he was phenomenal. I don’t know you could have asked for anything better than what he was. We’ve got six guys right there, that’s gonna be solid.

I asked Dillon Gee about his cup of coffee in the big leagues last September, and he essentially said it was an invaluable experience for him. Getting those few starts under his belt was a big confidence boost heading forward. He answered some questions about his chances of making the rotation, especially with the signings of Chris Capuano and Chris Young, and he seemed very positive about it all.

I got to ask Bobby Parnell about throwing his fastball more frequently last year and whether or not that was something he planned on doing. He said it was, and he said that’s his best pitch so he wants to make the hitters do the work and try to hit it.

Josh Thole seemed to genuinely enjoy the challenge of catching the knuckleball. When I asked him whether he thought catching gave him extra insight into pitch recognition and plate discipline, he said absolutely. He specifically mentioned getting familiar with the umpire each day and using that when he’s in the batter’s box. The reason I asked him about it was that most catchers seem to have awful on-base percentages while Thole’s, so far, has been very good. For any hockey fans out there, Thole had mentioned liking hockey in the kids' Q&A, and he grew up liking the St. Louis Blues but is now primarily a Phoenix Coyotes fan.

You can find more photos from the event on my Flickr.