Share All sharing options for: A Brief History of Mets Opening Day Pitchers

If all goes according to Terry Collins' plan, Mike Pelfrey will pitch on Opening Day for the Mets.  As he takes the mound to begin the 50th season of Mets baseball, Pelfrey will be the team's 21st Opening Day starting pitcher.  In the grand scheme of things, that may not mean much, but the internet was buzzing earlier this week when Collins announced Pelfrey would get the nod.

Over their first 49 seasons, the Mets have gone 32-17 on Opening Day.  The pitchers who lead the team in Opening Day starts are:

Notably absent from that list is Pedro Martinez, who only made one Opening Day start during his four years with the team.

Mike Pelfrey will be the tallest Opening Day starting pitcher the team has ever had.  At 6' 7", Pelfrey edges out 1984  starter Mike Torrez and 1981 starter Pat Zachry by two inches.  Tied for the shortest: Mike Hampton and Al Jackson. 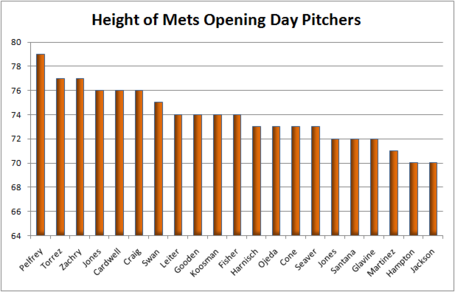 In addition, Pelfrey will tie Hampton and Pat Zachry for the fifth youngest Mets Opening Day debut in team history at the age of 27.  That makes Pelfrey the youngest since Hampton opened the 2000 season.

Those three also tie for 14th youngest for their Opening Day starts.  Gooden and Seaver combined for 10 starts before reaching 27.  The oldest Opening Day starter in team history was Tom Glavine, who was 39 when the season began in 2007.

You can find the complete list of Opening Day Mets pitchers, lineups, and results over at Baseball Reference.