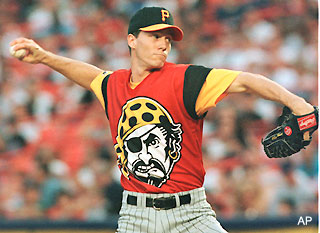 Earlier this month, Kris Benson formally announced his retirement. Fittingly, this news did not garner much attention, since Benson seemed to spend his entire professional career being overlooked or cast in someone else's shadow. Google "Kris Benson" and the top of the search results page, listed before anything related to the pitcher himself, are several pics of his photogenic wife, model Anna Benson. It's an unfortunate end to a career that once showed so much promise, and a cautionary tale of the fate that befalls many a number one draft pick.

Benson was a star at Clemson University, where teammates referred to him as The Messiah (a difficult label to live up to, I'd bet). During his collegiate baseball career, he won ACC Male Athlete of the Year, no small feat in a conference known more for hardwood than hardball. He also pitched for USA in the 1996 Olympics, winning a bronze medal. That same year, he was the first overall pick in the amateur draft, selected by the Pirates, thus ensuring he'd spend his best MLB years in Baseball Purgatory.

The righty made his major league debut in 1999, and pitched impressively enough to finish fourth in rookie of the year balloting. Benson had two notable run-ins with the Mets that year. On July 27 at Shea, he pitched a complete game, besting Orel Hershiser and the "Mercury Mets" on the infamous Turn Back the Clock Night. (See the pic above for what Benson was sporting that night; only slightly better than the Mercury Mets duds.) He returned to Queens for the last scheduled game of the regular season, when the Mets needed a win to ensure they would play again that year. Benson stifled the Mets for 7 innings, allowing just one unearned run. (New York eventually advanced to a one-game playoff against Cincinnati thanks to that rarest of outcomes, a walkoff wild pitch.)

He did not suffer a sophomore slump, throwing 217 innings and striking out 184 batters in 2000, and looked like he might be on the verge of superstardom. But Tommy John surgery put Benson out of commission for the entire 2001 season, and both those totals would turn out to be career highs. His next few seasons would be marked by injury, but he retained enough stuff to catch the Mets' eye as a midseason trade in 2004. Benson was acquired (along with Jeff Keppinger) for Ty Wigginton (made superfluous by the emergence of David Wright) and Jose Bautista (who had yet to flash 54-homers-a-season power).  As luck would have it, it wasn't even the most high profile Mets deal that summer; GM Jim Duquette dealt away gem of the farm system Scott Kazmir for unfortunate soul Victor Zambrano.

Benson pitched well enough in a Mets uniform; I still remember an admirable performance in a Subway Series contest at Shea in which he bested Randy Johnson (the game known forever after as The Mr. Koo Game). He also started the back-and-forth interleague game against the Angels shown occasionally on Mets Classics, tied in the bottom of the ninth on a Marlon Anderson inside-the-park HR and won a Cliff Floyd homer of the over-the-fence variety.

But Benson's time in New York was dominated by his outspoken, provocative wife. The press obsessed over the shapely ex-stripper--and she over them. After years of living in quiet Pittsburgh, Anna took full advantage of relocating to the media capital of the country. Typical of her public pronouncements: an appearance on Howard Stern where she proclaimed that if Kris ever cheated on her, she'd exact revenge with each one of his teammates. She also made some noise about wanting to do a reality show, which must made the Mets front office break out in a collective sweat.

The last straw came when she played Mrs. Claus to her husband's Santa during the annual Mets holiday party, complete with skimpy costume. Shortly thereafter, Benson was shipped to Baltimore in exchange for reliever Jorge Julio and then-afterthought John Maine. Though GM Omar Minaya insisted otherwise, the Mets presumably dealt Kris primarily because it got Anna out of their hair.

Benson enjoyed a decent season for the Orioles in 2006, and even beat the Mets in an intersquad game at Shea while belting a home run off of Pedro Martinez. It would turn out to be his last hurrah. A rotator cuff injury knocked him out for all of 2007, and he toiled in the Phillies' minor league system for the entire following season. He appeared in a grand total of 11 games in 2009 and 2010 for the Diamondbacks and Rangers before hanging up his spikes.

Once one of the best prospects in the game, Benson finished his career slightly under .500 (70-75) and a career ERA of 4.42. Just a reminder of how quickly injury and other factors can erode a promising career, particularly for pitchers. One only need to look at the man Benson was traded for, John Maine, to see another example of a pitcher who fell back to earth quickly. Benson may have not accomplished as much as he wanted to in his MLB career, but hey, we'll always have the Mr. Koo Game.