It took some time to tabulate all of the votes, but the results are in and we're set to reveal the winners of the Amazin' Avenue Offseason Plan Contest. The five finalists were announced last week, a group we selected from dozens of entries, many of which were completely readable.

This was an especially difficult offseason to plan -- both for Sandy Alderson and his powerless internet designees -- hamstring by minuscule budgetary flexibility an an unattractive crop of mid-level free agents available from which to complete a roster. But you were diligent and creative, ingenious and forward-thinking.

And now the results, in reverse order.

FOURTH PLACE: How I Think Small Market Sandy Should Approach This Offseason by Schmidtxc.

Now we're into the money. The top three vote-getters win prizes. Hit the jump to see who brought home the goods.

THIRD PLACE: I Have An AAOP, And My AAOP, I Like My AAOP by Brooklyn Dodgers Mets Fan.

Prize: A copy of the Baseball Field Guide.

And the grand prize winner...

Key Moves: Lots of cheesy graphics complement a reasonable plan to make the Mets competitive in 2011. Traded Duda, Juan Urbina, and Niewenhuis to the Rays for James Shields. Handed out moderate contracts to Orlando Hudson and Melvin Mora to help the lineup; brought in Randy Choate, Koji Uehara, and Todd Coffey to fortify the bullpen. Signed Tony Gwynn Jr. for defense.

Here's a pie chart of the voting results: 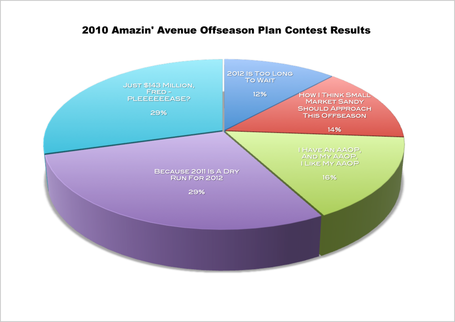 Big thanks to everyone who contributed, commented on, and voted for these offseason plan's. Congratulations to all of the winners, as well as to my wife, who will have three fewer baseball items to look at in our house.