That's right, the Animal has officially left for greener pastures. This shouldn't be all that shocking as the Mets non-tendered Carter just over a month ago but for anyone hoping for a reconciliation -- albeit at a lower salary -- you can end your vigil. Tampa Bay actually signed Carter to a Minor League deal with an invite to Major League camp last week though the news had not been reported until now, his agent told me this afternoon.

Carter probably got a little more hype than a guy with a .389 SLG deserves thanks in part to his "hard hat & lunch pail" mentality. It also didn't hurt that he ranked second in the Majors in pinch hits in 2010 -- first among rookies -- thus spoiling Andy Martino's poetic goodbye to Franky Cat's binder crammed with pitchers' mound habits (the answer is yes Andy, a rookie can be a pinch-hitter). However, we all know the main reason for the love and that was the nickname -- probably Jerry's only positive contribution to the 2010 Mets -- and of course the subsequent Fanshot images: 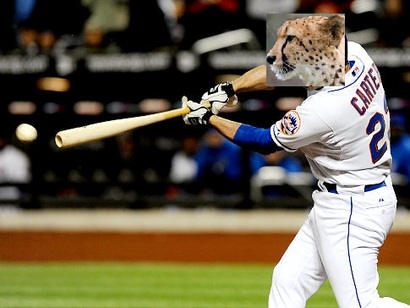