Share All sharing options for: Mets Draft History by WAR

Another day, another stolen idea: this week, we'll look at the Mets' drafts since 1990 through the prism of FanGraphs' WAR. You can see that Athletics Nation did a fine job with their version, and that mine is a poor approximation that I was only able to figure out with the help of people much smarter than I (thanks to Geoffrey Newton). But, still, it's a sad sight, with thoughts after the jump: 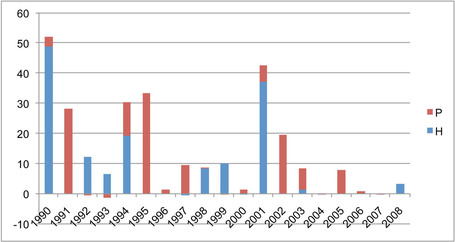 It's a really hit or miss kind of thing with the Mets in the 1990s. Many of the nice-looking years were mostly the contributions of a single player. Here are the highs in the years that the Mets managed to put together 10+ WAR:

It's pretty underwhelming, especially when you put it up against the Athletics' draft record. The list of 'stars' is okay, but there aren't many useful pieces. Only Brian Bannister, Angel Pagan, Ty Wigginton, Jeremy Guthrie, Terrence Long, Paul Wilson and Brian Daubach show up in that 5-10 WAR range - and most of them did their best work for other teams.

Of course, the later years in the graph (2003+) can't be fully graded yet. There are still some okay players from those drafts that may come up and help. If it weren't for Ike Davis, this graph might end in 2005 like the Athletics' version did. But still, 1996 and 2000 look like dead zones, complete whiffs. And look at those years that the team got no pitching (or even negative contributions) - 1992, 1993, 1998, 1999. The team hasn't managed to produce a single elite starting pitcher in this range - although I guess Scott Kazmir and maybe AJ Burnett were close during their peaks.

Overall, the mix doesn't look as bad because the team has produced some passable starting pitching, but both sides are a little top-heavy and missing the above mentioned mid-range players. Since 1990, the team has drafted 147.4 WAR worth of hitting, 127.2 WAR worth of pitching. But you see that if you add up the elite players above, you get 105.1 hitting WAR and 73.1 pitching WAR. Those players alone are the lions' share of the Mets' drafts since 1990. You might want to call it 'top-heavy' but only David Wright counts as a superstar.

It's not pretty. Let's hope the draft is a big part of the turnaround.