My hate/love relationship with John Franco

Are my negative memories of John Franco unfair to his actual performance with the Mets?

Share All sharing options for: My hate/love relationship with John Franco

John Franco was in the news this week -- he failed to appear on the necessary 5.0% of Hall of Fame ballots and won't be on the ballot again. It had me thinking about the former Mets closer and his status as one of the great "perception vs. reality" players of my lifetime.

My first memories of the Mets are from the 1991 season. The 1980s heyday was ending, Hojo and David Cone were stars, Bobby Bonilla was on the way, and Franco was in season two of his Mets tenure. Pre-terrible Tim McCarver and always awesome Ralph Kiner played roles shaping my early Mets fandom, announcing games on WWOR-9. More significantly, my Mets fan father was the main baseball guide of my formative years. The players he liked, I liked. The players he thought stunk, I thought stunk. And boy, did he think John Franco stunk.

"Oh great, here comes Franco."
"They should just start his appearances with two baserunners to save time."
"Bring in Jeff Innis!"

And you know what? I agreed then and, to some extent, agree now. It really did seem like every game he entered was an adventure. A walk, a hit, another walk -- BOOM, bases loaded in no time. The overall terribleness of the early 1990s Mets only served to exacerbate the perceived stink of John Franco. I was no fan of his and welcomed Armando Benitez's arrival in 1999.

Looking back, armed with FanGraphs and Baseball-Reference, Franco wasn't so bad. As Mets closer from 1990-1998, his ERA+ was a stout 142. He had just one truly terrible season during that span (1993) and was at least serviceable in the others. He excelled at suppressing homers during a time when it wasn't easy to do so. The strikeouts increased as he transitioned to middle reliever/setup man in his later years. His overall Mets K/BB ratio was a respectable 2.14. Additionally, he was ice in the postseason, striking out 10 and walking 3 in 14.1 innings with a 1.88 ERA. Franco's reality was much rosier than my perception.

Still, I can't shake the feeling that the Franco view shared by my father, myself, most of my Met fan friends, and some here at AA wasn't totally off. In the seasons from 1991-1996, his Clutch Score totaled -1.06. Clutch performance isn't predictive but that doesn't mean his poor showing in the clutch during my baseball infancy didn't happen. Perhaps this was a factor. There's also the tendency to remember the bad games much clearer than the good ones. It's like that poker quote:

Few players recall big pots they have won, strange as it seems, but every player can remember with remarkable accuracy the outstanding tough beats of his career.

I can recall where I was and who I was with the day Billy Wagner blew a four-run ninth-inning lead against the Yankees in May 2006, but dozens of his successful saves are long forgotten. The same applies for Franco, unfair as it may seem. The meltdowns of the early 1990s became my pervasive Franco memories, even as he racked up hundreds of saves.

Final ruling: The heart wins out, and my regard for him is lower than his Mets performance would normally indicate. In graphical form, here's where Johnny ends up: 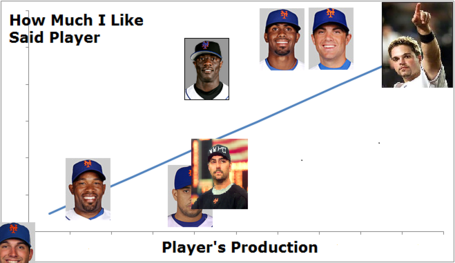