Yu and the Mets

Share All sharing options for: Yu and the Mets

The next Japanese import is, by most accounts, on his way to America. Though Yu Darvish has great stuff and will likely be an exciting signing for one American team this offseason, he might not be a great fit for the Mets. The devil is in the details of the posting process.

The Nippon Ham company is bleeding cash and the Nippon Ham Fighters have a desired asset in Darvish. The pitcher can make the holding company a lot of money through the posting process, and most experts familiar with the Japanese league consider the move a lock. Darvish also recently hired an American agent in Arn Tellem.

It looks like the Mets have the money for one prime-time acquisition this offseason. With more than $35 million coming off the books, the team can spend on one player even if the player salary budget drops to $110 million. Would it make sense to buy the youngest starting pitcher on the market with their money?

The popular Japanese baseball star hits 97 with his fastball and sits around 94. He has two sliders which break in different directions and are both out pitches. Then come the curve, changeup, shuuto (two-seam fastball) and changeup. All in all, that's (at least) five pitches that are major-league ready. Take a look at a Darvish game chart from July 30th of this year, courtesy NPB Tracker: 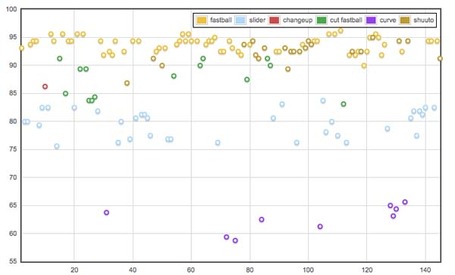 You can see that there are some classification issues, but the velocity is legit. And he uses four to five pitches regularly. Darvish has two sliders. One is a mid-80's horizontal pitch that breaks violently away from right-handers, and the other breaks more downwards and is slower. So far in 2011 he's induced whiffs on those pitches 19.5% of the time, too. With a fastball that averaged 93.8 MPH and a curve that was as slow as 65 MPH that day, he also gave batters a variety of looks.

Darvish has also avoided the major landmark high pitch counts that so many point to in Daisuke Matsuzaka's history. Sure, he's thrown a lot of pitches like most Japanese pitchers. But unlike Matsuzaka, he doesn't quite have a 250-pitch 17-inning complete game on his resume. Darvish was also eased into his pro career, with around 461.2 innings in his first three years -- Matsuzaka threw 587.2 innings over the same time frame.

He's taller than any Japanese pitcher that has made the jump to the major leagues. Half Japanese and half Iranian, his six-foot-five frame even has some room to fill out. At 25 years old, he represents a unique opportunity to acquire a young starter on the open market.

So let's say he's going to be good. Maybe even the best Japanese pitcher to come through the posting process. And the pitching free agent market this offseason looks dicey.

He still might not be a good idea for the Mets.

As bad as the Matzusaka experiment might have gone for the Red Sox, it's so rare to be able to buy a pitcher in their peak seasons that many teams will come to the auction room. The $51 million that the Sox paid for the rights to talk to Matsuzaka will provide a road map. Let's assume it's close to the actual number that it will cost to talk to Darvish.

The 'point' of paying that fee, other than getting a young pitcher in his prime, is that Darvish then has no leverage in contract talks. He can only return to Japan, and given the fact that he's shown a desire to come to the states by tacitly approving the sale of his rights to an American team, a failed negotiation would not be a great outcome for the pitcher. Matsuzaka signed for six years and $52 million -- add a couple million for inflation and you're probably looking at something like $120 million for six years of Darvish.

If Darvish is all he's cracked up to be, that would actually be a bargain. Think about John Lackey, who signed for five and $82.5 million and was 31 when he did so. Darvish is six years younger. His age makes him less risky, his lack of major league experience more risky. Any time you sign a pitcher for close to $100 million, you are making a risky choice. Risk is not actually the main issue here.

Look within the posting process for the clue to who would benefit most from taking part. Because the posting fee is outside the player salary portion of the budget, it does not factor into luxury tax considerations. So a team like the Red Sox or Yankees -- that might have to pay a dollar-for-dollar tax on any player they acquire this offseason -- would be highly motivated to try and get Darvish. They would only be taxed on the 6/60 portion of the contract.

A team like the New York Mets? They don't seem to fit the bill. They are not in luxury tax territory, so they don't benefit as much from signing a player to a below-market deal as the two teams with the biggest payrolls.

Not only that, but a team that is taking $25 million bridge loans from MLB does not have money sitting around to send the Nippon Ham Fighters one large check. They'd much rather sign a player to a regular contract, since they'd only have to pay them their yearly salary in bi-monthly increments.

So the actual budgetary implications of the posting process may keep the Mets from participating. That's a shame, because Darvish looks like he'll be an exciting player. But as we've seen, buying a pitcher without having any major league statistics to fall back on is an iffy process.

Maybe Mets fans will be happy to let this pitcher -- and all of his risk -- slip by.

Thanks to Patrick Newman for his contributions to this article.