Ladies and gentlemen, welcome to the 2011 Dickeys, the most prestigious Mets awards on the internet. We begin the festivities with The Dickey for Best Rookie.

There’s no doubt that the Mets would have been a better team in 2011 if players like David Wright and Johan Santana hadn’t spent most or all of the year on the disabled list. Even the healthiest version of this Mets team might not have had a chance to contend for the wild card, but the silver lining in such a season is that the young guys get a shot to play. Although there weren’t many impact players at the top of the Mets’ farm system, they got a long look at several players who could play an important role as affordable contributors on the team over the next few seasons.

This year, the six rookies were Pedro Beato, Lucas Duda, Dillon Gee, Ryota Igarashi, Jason Pridie, and Justin Turner. Igarashi came awfully close to qualifying as a rookie last year, but both Fangraphs and Baseball Prospectus considered him a rookie this year.

Folks, let’s be honest. The two rookies in the bullpen didn’t stand a chance in our voting. Beato was decidedly below-average, and Igarashi was downright afwul. It would be shocking to see Igarashi back in the organization next year, and Beato is certainly not guaranteed a spot on the major league roster now that he is controlled by the Mets. With those two out of the way, the nominees for Best Rookie are:

Lucas Duda: After a very slow start, Duda started to mash. He wound up finishing the year with a .368 wOBA, fifth in all of baseball among qualified rookies. On the downside, he needs some work playing right field.

Dillon Gee: Through June 15, Gee was rocking a 2.86 ERA, but the signs of regression were there all along. The rest of the year wasn't exactly awful, but Gee showed he's basically a capable back-of-the-rotation starter.

Jason Pridie: The oldest of the bunch, Pridie had a total of six plate appearances until playing for the Mets this year. He didn't do much with the bat, but the defensive metrics seem to at least agree he was a decent defender in center field.

Justin Turner: Despite a relatively weak bat, Turner showed that he could play second, third, and short without embarassing himself. His .311 wOBA is nothing special, but it's not all that bad for a player making the minimum salary.

And the Dickey for the Best Rookie goes to... 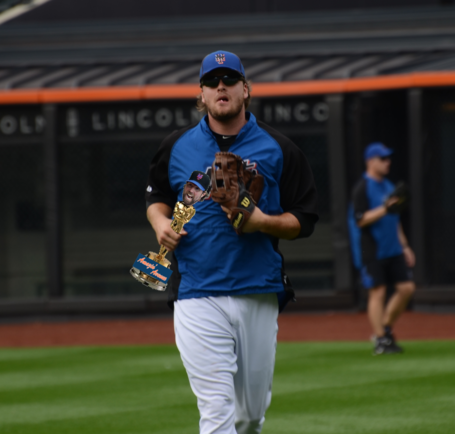 It comes as no surprise that Duda was the unanimous choice for Best Rookie. The Mets' other rookies showed they might be options for backup roles with the team in the future, but Duda's season was good enough that he should be penciled in as the everyday right fielder to begin next season. Here's a plot of Duda's home runs, courtesy of ESPN Home Run Tracker: 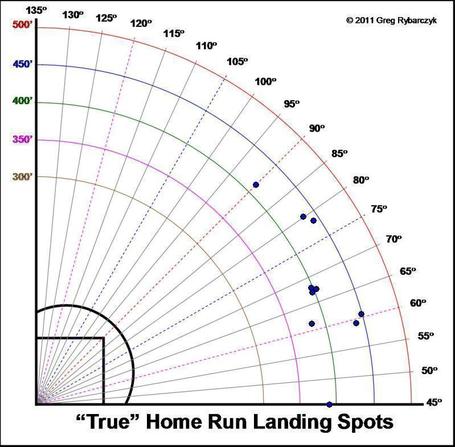