Welcome back to the Dickeys. Congratulations again to Lucas Duda on winning the Dickey for Best Rookie! We now shift our focus to the Mets' underachievers.

The 2011 Mets bullpen was bad. Really bad. They finished the year ranked fifteenth in the National League in ERA and xFIP. If FIP is your pitching metric of choice, well, they ranked twelfth in that, which isn't much better.

There were plenty of options for this vote, and the winner was not unanimous. While we didn't all agree on the single worst reliever, there was a near-consensus among the voters about a group of three pitchers who were not very good. With that, the nominees for Worst Relief Pitcher are:

Pedro Beato: If he weren't a Rule 5 pick, he probably wouldn't have stuck around the big leagues for the entire season. Pitchers who issue 3.63 walks-per-nine don't generally find success unless they're striking out opponents much more frequently than Beato did. His fly balls left the park for home runs less frequently than the league average, and opponents only had a .260 BABIP against Beato. Things could have been even worse.

D.J. Carrasco: The only player signed to a multi-year deal during Sandy Alderson's first winter, Carrasco was just plain bad. Fangraphs WAR had Carrasco at -0.5 on the season, among the absolute worst in baseball for relievers, and he achieved the feat in only 49.1 innings. Part of it may have been poor luck (.355 BABIP), but it was still a disaster of a year.

And the Dickey for the Worst Relief Pitcher goes to... 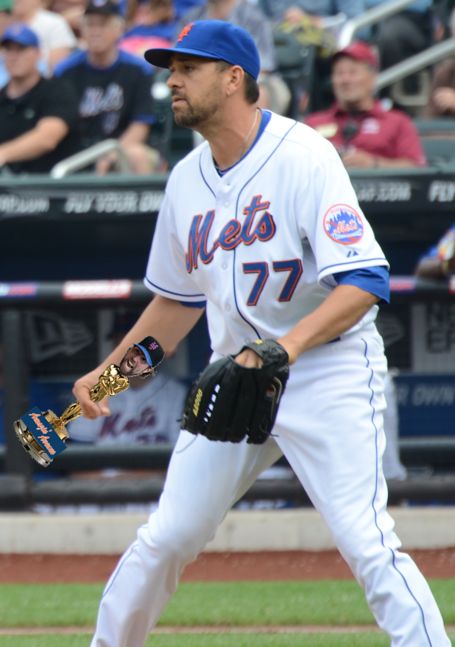 Better luck next year, D.J. Relief pitchers have always been on the volatile side from one year to the next, and there's at least a decent shot that Carrasco will return to the bullpen in 2012 and pitch some useful innings.