We now return to the Dickeys. If you weren't tuned in for the first two awards, Lucas Duda was voted Best Rookie, and D.J. Carrasco "won" the award for Worst Relief Pitcher.

As bad as the Mets' bullpen was this season, there were a few pitchers who shined while working in relief. Sandy Alderson has indicated that the bullpen is an area upon which he intends to focus this winter, but the good news it that he might have at least a couple of good relievers already in the organization.

The nominees for the Dickey for Best Relief Pitcher are:

Manny Acosta: Probably underappreciated by most fans, Acosta struck out plenty of opponents and kept his walks to a relative low this year. He was prone to giving up hits, but over 85 games with the Mets in two seasons, he's put together a 3.22 ERA, 9.1 K/9, and 3.4 BB/9. That's pretty good.

Tim Byrdak: Perpetual Pedro Feliciano was so good against lefties that he seemed irreplaceable, but Byrdak fit the bill. Against lefties, Byrdak notched 12.46 K/9 and 2.08 BB/9. On the downside, if an opponent were right-handed, Byrdak's walks were through the roof.

Francisco Rodriguez: He only spent half the season with the team before he was traded to the Brewers, but in that time, Rodriguez was his usual self. Plenty of opposing hitters reached base, relatively few of them scored, and he struck out a whole bunch of guys, too.

And the Dickey for the Best Relief Pitcher goes to... 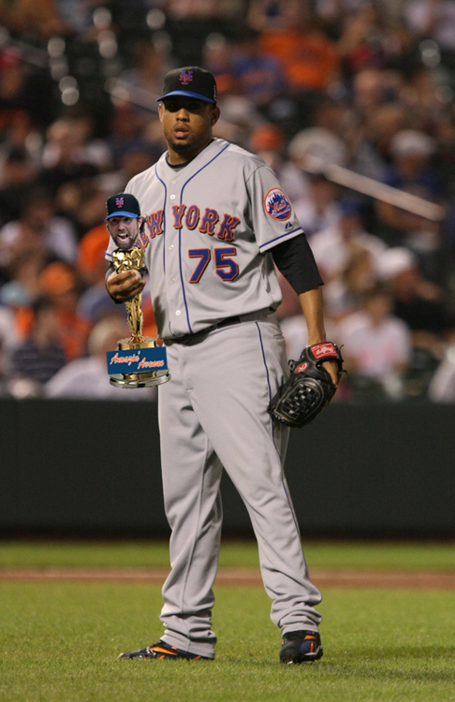 Congratulations, Frankie! You look a little confused by this award.