The Mets' starting rotation was nothing special this year, but a few starters were particularly mediocre. The nominees for the Dickey for Worst Starting Pitcher are:

Dillon Gee: After posting a deceptively low 2.18 ERA in his cup of coffee at the end of last season, Gee started off this year with a 7-0 record and 3.05 ERA through June 15. Of course, judging a pitcher by wins is laughable, and Gee's lackluster peripherals caught up with him by the end of the season. He finished with a 4.43 ERA, 4.65 FIP, and 4.46 xFIP.

Mike Pelfrey: After putting up an artificially shiny first half of 2010, Pelfrey was deemed the Opening Day starter by Tery Collins long before the season began. Some people actually thought that indicated Pelfrey was filling in as the "ace" with Johan Santana unavailable. For those who knew that was foolish, Pelfrey did what was expected, throwing around 200 poor innings while rarely striking out opponents.

Pelfrey's strikeout percentage ranked dead last among all qualified National League starting pitchers. In each of the three season before this one, his xFIP was 4.45, 4.47, and 4.31. This year, it was 4.55. Anyone who tells you Pelfrey is anything other than a back-of-the-rotation pitcher doesn't know what they're talking about.

Chris Schwinden: Called up late in the season to make some starts in Jon Niese's place, Schwinden had his strikeouts and walks in fairly good order but still got shelled despite giving up very few home runs. Perhaps he was a bit unlucky, but the results were not very good.

And the winner of the Dickey for Worst Starting Pitcher is... 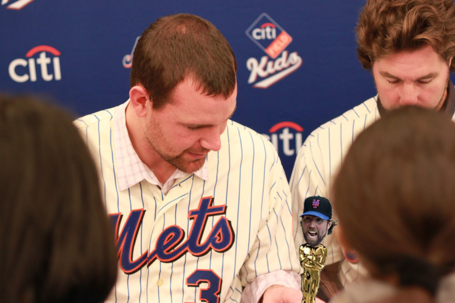 And it wasn't even close. Pelfrey was the unanimous choice for the award, and everyone after that was a bit of a mixed bag.