After unanimously naming Mike Pelfrey the Mets' worst starting pitcher this season, we turn our attention to the better part of the rotation. Although starting pitching was a weakeness for the Mets this year, it wasn't all bad. I've said it a bunch of times already, but the fate of the rotation will depend on whether or not Johan Santana can pitch like his previously healthy self. On the upside, R.A. Dickey and Jon Niese are both here for at least next season.

Only three pitchers received any votes for the Dickey for Best Starting Pitcher, which brings us to the nominees:

Chris Capuano: There was no room for Capuano in the Brewers' rotation after they acquired Zack Greinke and Shaun Marcum, and the Mets scooped him up last winter with hopes he could remain healthy in their rotation. He did just that, throwing 186 innings over 31 starts. His 4.55 ERA didn't live up to his peripherals, which were very good, mainly because he was prone to giving up home runs. The highlight of Capuano's season came on August 26, as he pitched a two-hit, thirteen-strikeout shutout against the Braves.

R.A. Dickey: The well-spoken knuckleballer followed up his remarkable 2010 season with another very good one. Like last year, his walk rate was outstanding, especially since he throws the kunckleball. Dickey threw 208.2 innings, producing a 3.28 ERA, and he was fantastic for most of the year after struggling a bit at the beginning.

Jon Niese: Like Capuano, Niese's ERA didn't quite live up to his peripherals, which were also very good. With 7.89 K/9 and 2.52 BB/9, Niese probably should have wound up with better results. Of concern for Niese was his .333 BABIP, which might suggest poor luck in smaller samples but was nearly in line with his career mark of .329. It looked as though Niese was going to finish the year with over thirty starts, but he got hurt in September and did not get a chance to pitch a full season.

And now, the Dickey for Best Starting Pitcher goes to... 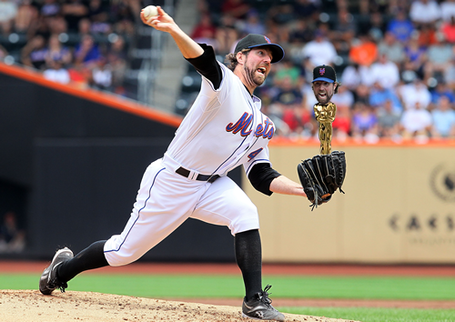