The Mets scored a good number of runs on the season, but some hitters were certainly less productive than others. A whopping ten players received votes on our end for this unwanted award, but there as a distinct split in the standings between the upper and lower tiers.

The nominees for the Dickey for Worst Hitter are:

Jason Bay: If last year was just plain bad, this year was awful. Bay managed a whopping twelve home runs, double his total from a season ago, but every number of his triple-slasher was lower than last year. Although he was nowhere near the elite left field bats of Ryan Braun and Matt Holliday, Bay did manage to finish in the middle of the pack in wRC+ among qualified players at his position.

Willie Harris: Although Harris got on base at a respectable clip, his average was quite low and his power dipped well below his career .349 slugging percentage. He finished with a .301 wOBA, which might not sound all that bad, but his league- and park-adjusted wRC+ was 90, which is not good. Somehow, he managed to play in 126 games.

Ronny Paulino: His overall stats on the season look particularly bad since he stopped destroying left-handed pitching. Instead, he was merely above-average against lefties while still struggling mightily against pitchers of the right-handed variety. It didn't help that he saw more plate appearances against righties than lefties, either. Catchers really suck at hitting.

And now, the Dickey for Worst Hitter goes to...

It's a tie, folks - Jason Bay and Willie Harris! 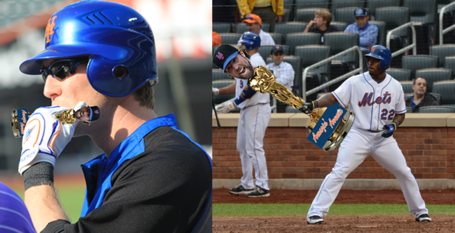 Bay is thinking long and hard about winning the award, while Harris decided to replace his bat with an oversized version of the trophy. Ronny Paulino was kind enough to make a cameo in the Harris photo in honor of his tied-for-third finish. Chin-lung Hu was nowhere to be found.

In case you missed any of the previous awards, they were as follows: