We've reached the last Dickey award for 2011. The Mets didn't do everything well this year, but the one area in which they were actually pretty good was run scoring. Despite a general lack of power, they scored 4.43 runs per game, good for sixth in the National League and well above the league average of 4.13. As a team, they go on base at a very good clip, but there were a couple of hitters who really stood out this year.

With that, the two nominees for the Dickey for Best Hitter are:

Carlos Beltran: Although he was traded before the deadline, Beltran led the Mets in home runs and RBI for the season. His .289/.391/.513 line was nearly as good as his best years with the Mets, and his .389 wOBA and 151 wRC+ were tops on the team for qualified hitters.

Jose Reyes: I summed up Reyes' season last week as the top story of the 2011 Mets, but it's worth another quick review. Reyes won the Mets' first-ever batting title, hitting .337 on the year. He rarely struck out, got on base nearly forty perecent of the time, and hit 7 home runs and 16 triples. Reyes stole 39 bases and was only caught 7 times, a sucess rate of nearly 85%. All of that and more added up to an outstanding .386 wOBA and 149 wRC+. By both measurers, it was the best season Reyes ever had.

And now, the Dickey for Best Hitter goes to... 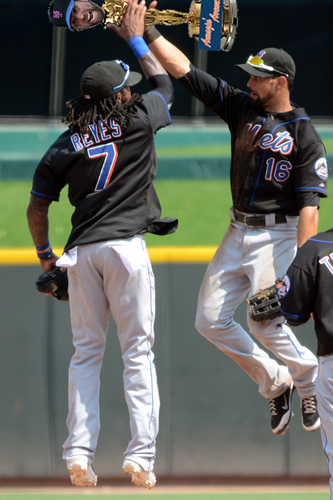 An argument could have been made for either player to win the award, but Reyes' full season with the team made the choice clear. Everyone voted for Reyes first and Beltran second. The third-place votes were a mix of Lucas Duda, Daniel Murphy, and Ike Davis.

In case you missed any of the previous awards, they were as follows:

And now it's your turn to vote. We'll sum up the community awards in a post in the coming days to compare your results to ours.