2011 Postmortem: A position-by-position look back at the season with some preliminary thoughts on 2012. 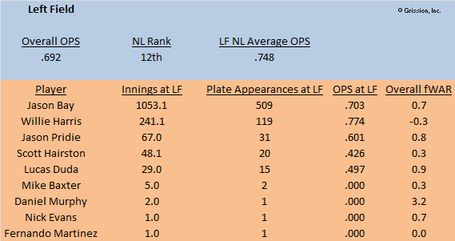 No one thought it would be this bad. Sure, everyone everyone hated the Jason Bay contract for various reasons but a 100 OPS+ and 18 home runs in his first two seasons as a Met? Only the most pessimistic anti-Canadians among us could have predicted it. Whenever Bay is in the batter's box, all I see is a giant Publisher's Clearing House-type check for $16 million. And this is what a trip to Bay's Baseball-Reference page feels like.

Bay's season had a "one step forward, three steps back" feel to it. Every time he strung together a few good games after weeks of suckage, the fanbase always seemed to respond with hopeful "maybe he's figuring it out?" sentiments. And without fail, he would immediately slide into a 4-for-30 funk. Bay finished with a strong September (.313/.392/.563) so maybe he's figuring it out? Doubtful, but he's still not completely ancient at 33 years-old so perhaps he can rebound. More time removed from the concussion he sustained in 2009 is also reason for modest optimism. Even an OPS of .800 would be welcome at this point.

That's enough Bay bashing, for a few sentences at least. Bay broke the Mets' long-standing grand slam drought on June 28th in a 14-3 drubbing of the Tigers at Comerica Park. It was the first slam since August 1st, 2009 when Angel Pagan did the deed against the Diamondbacks at Citi Field. The classless* Carlos Beltran overshadowed Bay's achievement by hitting his own grand slam just one inning later (against the same pitcher, Daniel Schlereth). Regardless, it was a nice highlight for Bay in an otherwise disappointing season. It's worth noting that he consistently busts it down the line and hustles to balls in the outfield. In that regard, he's an fine example for all players. But forgive me if I'm being crass when I say I care about that maybe 3% as much as I care about his slugging percentage.

Willie Harris played five positions -- six, including designated hitter -- but spent most of his time in left field. He is a point of contention amidst the alleged sabermetric groupthink that is Amazin' Avenue. Harris was a leading vote-getter for the AA Mets' Worst Hitter Award, yet I don't think he was as horrible as alleged. He posted a .351 OBP as a reserve while playing, in my estimation at least, solid defense. Yes, his power was Tholian and he probably played a bit too often but Harris wasn't the catastrophe that many made him out to be. That said, securing a Harris return in 2012 should not be an offseason priority.

"Whitestone's Own" Mike Baxter was called up in August, doubling in his first at-bat as a Met and finishing with a respectable .235/.350/.441 slash line in 40 plate appearances. He is a soon-to-be 27 year-old who might provide some organizational depth. Big things shouldn't be expected. Baxter also hit the last home run at Citi Field before the forthcoming dimension changes.

In fantasyland, the Mets convince some chump team to take Bay off their hands. Unfortunately that seems unlikely. And signing a David DeJesus type to start while Bay is cut or relegated to the bench isn't worth what might not even be an upgrade. We're stuck with Bay in 2012. However, discussion of giving him the heave-ho will begin if he continues to be FUBAR.

* - If this is your first time reading Amazin' Avenue:

a) Welcome; and
b) the "classless Carlos Beltran" thing is heavy sarcasm.