Here we are, still trying to unpack the benefit of a good batting coach. Dave Hudgens seems to have had some impact on the lineup this year, at least judging from our first attempt at figuring out how the Mets batters had changed their approaches under his tutelage.

Now it's time to take a look at pitches per plate appearance. It seems that a patient philosophy would demand more patience of its' batters, doesn't it? Here are the digits for the key players that played in 2010 under Howard Johnson and returned to action last season. 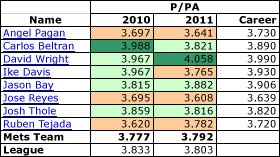 The fact that this is a mixed bag is actually okay! Amazin contributor Bill Petti did some work relating pitches per plate appearance to different plate discipline statistics on Beyond the Box Score yesterday. The good news is that P/PA is highly year-to-year correlated, so it does seem like a skill. Players generally see a similar amount of pitches per PA over the course of their career.

The bad news is that it is only slightly correlated to other, more important skills. For example, it looks like pitches per plate appearance explains, at most, about 50% of a batter's walk rate (the r^2 between P/PA and BB% is only .54). Intuitively, it actually makes sense: seeing more pitches is only valuable if you are discerning correctly which are balls and which are strikes. Finally, swinging at, and making contact on, pitches in the zone takes patience, eye, and hand-eye coordination.

Back to Tejada. He's one of two players on the Mets that saw more pitches in 2011 than he did in his career. Alone, that's not that much of a step forward. After all, he saw .16 more pitches per plate appearance. That's it. But let's revisit the stats from part one of this piece, with an added column:

The new column compares the player's performance to their career levels, and you'll see that it takes some of the shine off of the impact of the hitting coach. In some cases, the improvement could have been regression towards career norms. So many of these are fully-formed veterans, anyway. There's still more green than red on the right side of the ledger in most cases.

But put the P/PA and revised contact and swing charts together, and you get two success stories for Hudgens. David Wright swung at pitches outside the zone less and made more in-zone contact than he's had in his career. Some of it could be regression, but it looks like Wright and Hudgens are on the same page.

The other success story is unmitigated. In every possible way, Hudgens has been a great influence on Ruben Tejada's plate discipline. Ruben Tejada saw more pitches per plate appearance, swung at more pitches in the zone, and made more contact in the zone this year. Sure, he swung slightly more at pitches outside the zone, and swung through a few more pitches, but in both cases he was still better than the league norm. He's had a much better walk rate in the majors than the minors, and it's good to see the underlying stats match up. Maybe he'll be a pretty decent middle infielder with the combination of his glove and his patience.

We'll move on to heat maps next week.