Visualizing the Mets Offense Through Time

Share All sharing options for: Visualizing the Mets Offense Through Time 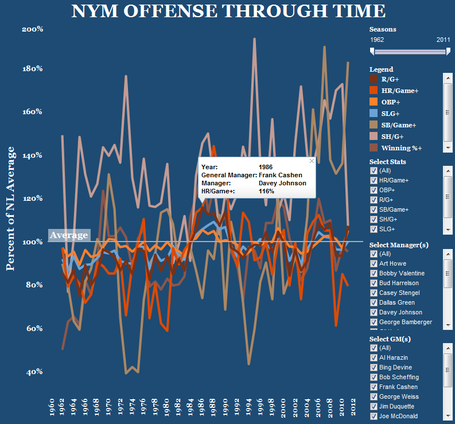 A while back at Beyond the Box Score, I wrote a few articles visualizing the effect of Earl Weaver's strategy on the Orioles' offense through time. We know that compared to his contemporaries, Weaver viewed offensive success as more a function of power than small ball. Visualizing how much the Orioles bunted and stole bases relative to the league average drove home how much Weaver's view impacted the Orioles' offense in practice.

I've been wanting to do something similar for the Mets and, now that the off-season is upon us, finally got around to it. I took some key offensive metrics and calculated how the Mets performed on each as a percent of the National League average for each year since 1962. I used that data to create an interactive visualization (which can be found and played around with here), previewed in the screen shot above.

You can restrict the visual by seasons, as well as by various Met managers and general managers.

Here are a few quick observations based on playing with the filters: 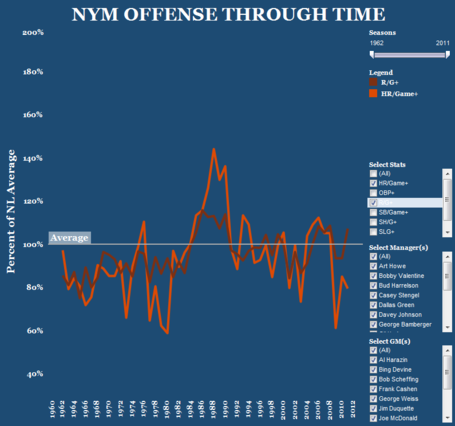 Generally speaking, the Mets have not had an offense that thrived on the long ball. This isn't surprising, given their home parks. But there was a period of time where the Mets performed really well relative to the rest of the NL when it came to hitting home runs: the Frank Cashen years.

Cashen took over as general managerin 1980. At that time, the Mets were consistently scoring below the NL average per game and were a dismal 40% below the league average in terms of home runs. Through the draft, trades, and free agent acquisitions, Cashen built an offense that was better than any in Mets' history at clearing the bases. You can also see the impact of the home run on the Mets ability to score runs. Only three times have the Mets have finished above the league average in runs per game without also finishing above league average in home runs, last year being one of them with by far the largest gap between the two statistics. 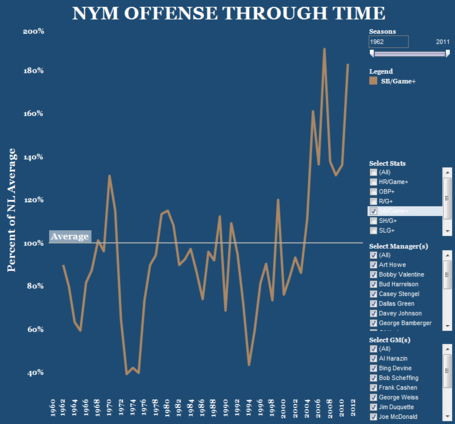 Throughout their history, the Mets have rarely been a high-powered stolen base threat. Certainly, there were a few years where the team finished above league average. However, nothing compares to the Omar Minaya era. The graphic above is filtered on SB+, and you can see how drastic the increase in the running game was, especially considering how the rest of the league leveraged the steal.

Again, this is a combination of personnel and manager strategy. The team that was constructed, partly by Minaya, had a number of stolen base threats in the lineup. But it also reflected the running strategy of managers, such as Willie Randolph.

Sandy Alderson doesn't appear to be the biggest fan of the steal, but given the roster he inherited you can see that the team still tried to leverage that skill set in his first season as GM.

Obviously, there are a lot more things you can investigate with the tool. So have at it.