Time for another temperature check in the winter leagues (pun intended as I'm still digging out and the temp in my powerless home now drops below 40 degrees). We've got a couple of interesting new additions -- not to mention departures -- among the winter league ranks to check in on this week. Plus, there's the customary hot hitters complemented by the requisite stinkers as well. Not much significant action among the active pitchers since our last check so let's focus strictly on the position players this time around:

As I mentioned, we had a rather notable departure this week as Josh Satin found a pink slip on his locker down in VZ, ending his run with the Leones. He was in a pretty hefty batting slump tallying just one hit in his last 26 ab's, but it should be noted that he still collected 17 walks -- versus 16 K's -- which was good enough for a .407 OBP in his 14 games as a Leone. But as we all know, you don't bring in a ringer in to clog the bases...

Although if we're being honest, probably the final straw for him didn't happen at the plate. It was his 12th inning misplay of a ball out in left -- where he's played exclusively and for the first time this fall -- which put Caracas behind for good in their loss on Saturday. Anytime that happens it's not good but this time was during the first meeting of the year between the Leones and their most hated of rivals from Magallanes. Some actually call it the greatest rivalry in sports; pretty interesting article about it here. Not coincidentally, Satin wouldn't appear in another game for Caracas.

So you remember when I mentioned hot hitters? Yeah, that's Lagares right now. All he's done is collect at least one hit in each of his eight games, more than one hit in six of them, extra-base hits in six of them. He's currently leading the circuit in hitting and he's top five in OPS as well. It's a gd shame that he's on the twice-a-week taxi squad because he's jumped on to my short list of guys I'm really curious to see get more at bats. I'm not as judicious as jp; I like Lagares a lot.

Also of note, MLB.com sat Peoria/St. Lucie Mets Manager Pedro Lopez down to discuss the Mets position players out in AZ. There's some interesting video of these guys both at the dish as well as in the field, plus some good insight from a guy who's managed many of these players for a couple of seasons now.

"He's done some great things...he's a good outfielder, he can play all three outfield positions. At the plate...Lagares has been that example of a guy that used to swing at a lot of pitches outside of the strike zone. Even last year in 2010, he had a good year for me in Savannah before he went off to St. Lucie, but he would just swing at too much out of the strike zone.  This year he's able to do a better job managing the strike zone and it's paid off for him.

Speaking of hot hitters, Marte is another one swinging a good bat right now. In fact he just ended a very nice seven-game hit streak that saw him bat .385 with a pair of homers and a trio of doubles. Even better, he walked six times in that span versus just two strikeouts, which has been the story of his fall season so far. Yes it's a small sample, but he's shown signs of this kind of development before -- for example, the first half of 2011 -- and hey, I'd still rather see it now in a small sample than not at all.

Defensively, he's been seeing some time at first base, which is new for him. However, I wouldn't be surprised if he's nursing something minor as he hasn't appeared in a game since Friday.

"By preaching it every day. Keep mentioning it out there to him...These guys don't feel like they have to swing at everything, especially with two strikes...[Marte] has done a great job so far, he's still working on some things mechanically. But his approach is solid at the plate and I'm looking forward to seeing him keep improving."

I also mentioned some stinkers. Flores has sunken from his .200 average at last check thanks to a 3-for-20 stretch. He's still got just one XBH -- a double -- in 15 games thus far and he's sporting a rough 4:13 BB-to-K rate. Things aren't going well at the dish.

However, the interesting thing is in the field, where he's not only played a lot of third -- his probably long-term home -- but suddenly he's been seeing some time at second base, which is something completely new for him as a pro. That in itself makes it interesting. However, I must point out that this is probably less about the Mets than it is the Bravos, who now have four 3B -- and just one 2B -- on the roster. It's no coincidence that Flores shifted over the same day Arizona's Sean Burroughs showed up. But hey, can't hurt to let him try a new position since we know shortstop isn't gonna work.

Tovar has really gotten things going since our last check, increasing his average from a hollow .269 up to a more robust .315, on the strength of his last ten-game stretch where he's had at least one hit in all but one game and he's batting .385 over that time. Even more promising is the .590 SLG he's shown in that span, which has been one of the biggest weaknesses in his game, especially as he retains his extremely good contact skills.

Tovar has also been seeing most of his time at second base thus far as it sounds like the org. is satisfied with his play at short and him wants to maintain his defensive flexibility, which is always a good idea.

"...Everywhere he's been in our system, he's played shortstop. There's no doubt that he can play out there. I think they want to see him more at second base, see whether he can go out there and play. He's done a great job so far...he's got great hands. Now you've got a shortstop playing second base with shortstop range and shortstop arm and he's another guy putting up some good numbers and having quality at bats.

Another quiet week from the toolsy infielder, who has been playing pretty much every other day for the DWL powerhouse Licey club. Some days he's even just pinch-hitting making it tough for him to get going, though it's still nice to see the 1:1 BB-to-K rate thus far. On the other side of the ball, he was featured a lot more at second base this week. It's starting to seem interchangeable between short and second for Valdespin at this point.

Centeno's been seeing a lot more game-action of late -- whether behind the plate or as a DH -- and it's showed in his batting line. He's boosted his overall totals by going 10 for his last 20 and first-hand observers have been impressed by his work defensively.

"He's what? 5'9" probably, he's got good hands behind the plate, he can block, he's a good receiver and also for a kid his size he's got an above-average arm. He's a catch-and-throw guy...Offensively he had a great year for us in St. Lucie, put up some good numbers...He's another guy that offensively, it's mainly working on some things but mainly it's just a great experience for some of these young hitters being in a league like this where the competition is so tough."

To Lopez' point about Centeno's...slight stature, I've got to highlight this pretty funny image of Centeno standing on first base and being dwarfed by first base coach, 6'3" Rob Carson, who looks bigger than that when you stand next to him: 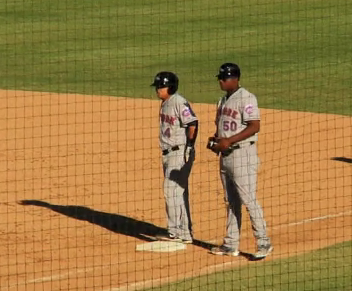 I'm officially drinking the Kool-Aid on Gamboa who is batting .448 over his prior ten games. He now stands at second in the league in batting as well as OPS -- just ahead of Mike Jacobs. Even better, like Tovar he's continued to show surprising pop knocking two more bombs in his last four games. He's becoming my top pick of players currently in this system to step into the legitimate prospect realm in 2012.

The 24-year old Zapata has boosted his average on the strength of a current eight-game hit streak which corresponds to the time that he began getting nearly regular playing time. He's no stud but Zapata seems to perform admirably regardless of level and thanks to his good athleticism fits the fifth outfielder mold nicely.