The new Citi Field outfield wall dimensions were announced today, and the first meme was born almost simultaneously. With the walls pulled in, David Wright was happy, or he was about to hit more than ten home runs -- check the twitter machine for your favorite version of that one. How it will actually affect the third baseman's power is something we won't know until he actually hits in the park, but we can take his 2011 hits and lay them on top of a composite image of the wall changes released today by the Mets. 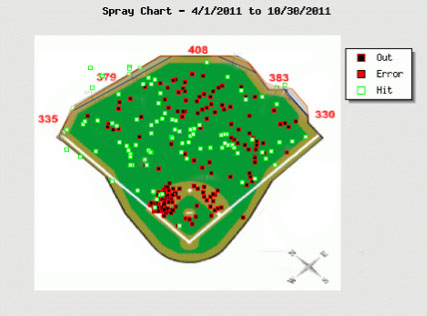 When we did this with Jose Reyes, it was obvious that the new park wouldn't make much of an impact on his power. This overlay is less definitive.

See those four blue dots in left-center? Those are a lot closer to the wall now. They used to be doubles, but now they might be triples. It's also unclear exactly where katron.org's landing spots come from. Was that where the fielder was standing when he caught the ball? Or are they landing spots for the ball? In the second case, a ball could have hit the wall and dropped to the ground there. They might go over the wall now. There might also bee some orange dots that used to be outs that might now drop as the outfielder stumbles on the warning track.

In any case, the new walls are probably not going to double Wright's home run production at home. But this exercise does suggest that he will enjoy a non-zero boost next year when they pull those walls in. And paint some blue!

EDIT: I updated the chart using Texas Leaguers info. Those are all of Wright's 2011 hits, not just his Citi ones. But the left-center power alley is still interesting to Wright.