2011 Postmortem: A position-by-position look back at the season with some preliminary thoughts on 2012. Plate appearances listed for each player represents overall plate appearances, not just those logged at the position in review. The stat wOBA is weighted on-base average -- read more about it here. It's like OPS but better, and on the same scale as on-base percentage. Cliff's Notes version: a wOBA below .300 is poor, .330 is about average, .400 is elite. fWAR is FanGraphs wins above replacement -- read more about it here. 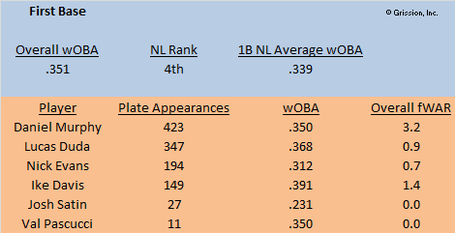 After a respectable rookie campaign, Ike Davis avoided the sophomore slump through the first six weeks of the season. He was drawing walks, playing strong defense and hitting literal moonshots. Unfortunately, he couldn’t avoid the sophomore season-ending injury. A seemingly innocuous collision with David Wright in Colorado on May 10th resulted in a nagging ankle injury. In Mets fashion, the prognosis worsened as the season progressed. Observe:

Ike Davis will be placed in a boot for three weeks after an MRI revealed the bone bruise in his left ankle has not calmed.

Ike Davis will avoid baseball activities and running for the next four weeks and will be reevaluated Sept. 1, Sandy Alderson said. The GM added that the organization does not plan for Davis to return in 2011.

Davis led the team in wOBA (minimum 100 plate appearances). It is unlikely that he would have kept up that pace for 162 games, but it would have been fun to watch him try.

Daniel Murphy and Lucas Duda filled in at first base but they will be covered in the second base and right field postmortems, respectively. That leaves Nick "Who?" Evans, Val Pascucci and Josh Satin as the others who saw time at first.

After shuttling between Triple-A Buffalo and Flushing most of the summer, Evans played almost every day with the Mets from mid-August through September. This was the arrangement many among us had requested but not received in late 2009 and 2010 when the Mets' fate was sealed and young players deserved a look. Evans responded with an August hot streak that saw his OPS balloon to .944 at one point. It looked like he was on his way to solidifying a spot on the bench next season until he went on a late slide to finish with a league average batting line. League average is nothing to scoff at though; combine it with adequate four corners defense and Evans still has a shot to contribute in 2012. It depends, like everything else, on the outcome of the Jose Reyes Saga. The future roles played by Ruben Tejada and Daniel Murphy hinge on the Saga as well, and a Reyes return likely means a tough road for Evans to make the team.

Folk hero Pascucci notched his first big league plate appearances since 2004 and made the best of them. He went 3-for-11, including a pivotal game-tying home run off Cole Hamels in late September which produced this memory: 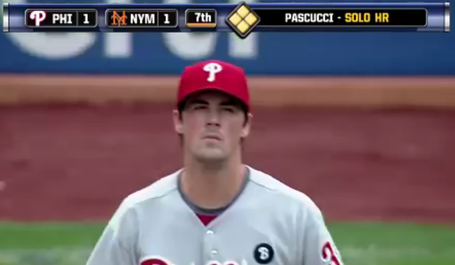 Thank you, Val, for being an enormous human being, swinging for a home run every time and providing a meaningful moment (to all those still watching) against the Twilight fan down I-95. We wish you well.

Satin was named the organization player of the year after posting a combined .906 OPS between Double-A Binghamton and Triple-A Buffalo. His expanded rosters call up was well deserved and it was nice to see the minor league masher make it. Satin played sparingly with the Mets in September and couldn't get anything going at the plate. He struck out 11 times in 27 plate appearances, while hitting just one extra base hit (a double). Satin turns 27 in December and isn't much with the glove. He has experience at second base but it's unlikely he can stick there in the bigs. And there is a glut of similar players above or equal to him on the depth chart (Murphy, Evans, Justin Turner, Zach Lutz if he can stay healthy). Satin's future with the team is not promising.

If Davis is healthy on Opening Day, he has the first base job. Trading him coming off injury doesn't make sense, unless the Mets can print a few billion dollars to sign Albert Pujols or Prince Fielder.