Baseball America's Matt Eddy is reporting that the Mets have gone ahead and signed minor league free agent outfielder Adam Loewen to a minor league contract: 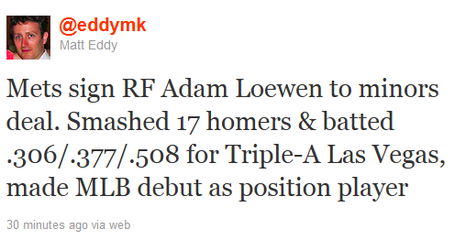 For those who don't know him, the 27-year old Loewen has always been an interesting case around minor league circles for a number of reasons. First and foremost he's Canadian; he hails from that hotbed of socialized baseball talent, British Columbia. And actually in '02 when he was drafted 4th overall by the Orioles he was the highest drafted Canadian ever -- until Jameson Taillon in 2010. In '06 he even earned the win in Canada's pivotal WBC victory against the US. So basically there's no questioning his proud Canadian heritage.

Next, he was the first -- and to this point only -- pitcher that has ever debuted against four consecutive Cy Young award winners. Back in '06 when he made his major league debut with the Orioles, in his first four starts he faced Randy Johnson, Roy Halladay, Halladay again and then-Met Tom Glavine (side note - Loewen would lose that last game, allowing all four runs on a David Wright Grand Slam in the fifth).

Next, he's a 6'6" lefty who can deal. Pitchers like that don't grow on trees.

Except -- much more interestingly -- he's no longer a pitcher. After varying degrees of success on the mound in the minors -- including a career ERA around 2 between Double and Triple-A -- Loewen developed serious and sudden control health problems, namely a balky elbow. Ultimately Baltimore shifted him into the field, hoping for an Ankiel-like rebirth and while it's been a long and arduous process -- both Baltimore and more recently Toronto have grown impatient and cut him loose -- it has been somewhat successful (see, .884 career Triple-A OPS). Though he's still yet to have his breakthrough in the bigs, logging just 34 career at-bats in the majors thus far.

All in all, interesting signing. Why not buy a lottery ticket on a very athletic player who's shown good skills as a hitter and could conceivably become a late bloomer steal? It's not the most likely thing that could ever happen but why not give it a shot? Worst case, he stinks it up in Buffalo and that's that. Best case, Jayson Werth?

Oh and the final interesting thing about Loewen is the sweet 'stache he's currently rocking.