Among the Mets top three career minor league home run leaders, Butch Huskey is most definitely one of the greatest power hitters the club has ever produced. Though that's certainly not some great honor as the Mets have never at any point in their 50-year history been known for their home run prowess -- ranking 7th from the bottom in all-time home run leaders by team.

But that doesn't mean Huskey still wasn't a pretty fearsome slugger. In fact among Mets prospects, only two other players have knocked more home runs in their first four major league seasons with the club than Huskey (86) and their names are Strawberry (108) and Wright (97).

I was curious about Huskey as his name came up in a thread this week. A commenter in the recent Mets MVP Infographic pointed out that Huskey was a glaring omission, having been robbed in what we can assume was his best season in 1997. And it was a pretty strong season:

.822 OPS, 114 OPS+, 24 homers -- including seven in September as the Mets made a late, albeit fruitless, run to catch the Wild Card and eventual WS champion Marlins. Definitely a strong individual season but worthy of MVP votes? I don't know, not a slam dunk, especially not during the offensively-charged 1990's. But let's take a look at how the voting broke down that year (click image to embiggen): 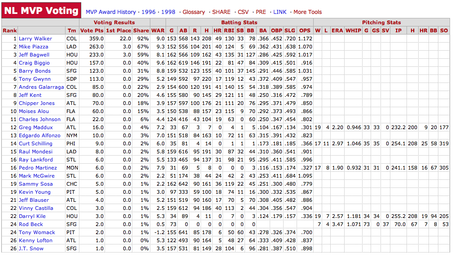 Well first of all, looks like this was one of the numerous seasons that Mike Piazza was robbed of an MVP (yes Walker's numbers were better but when you consider positional value it's not close). But I digress. It seems that the commenter -- kendynamo to be specific -- was right; Huskey probably deserved MVP votes that season. Now I certainly wouldn't place him among the upper echelon with Piazza, Bonds, Kent, etc but he certainly deserves mention among guys like Jeff Blauser and Kevin Young. Hell, he may have had a superior season to Sammy Sosa, who received five votes.

Again, not a slam dunk so I'm not going to begin a crusade in his honor, but I will agree that he got jobbed a bit. Regardless, here you have a mint condition 1993 Upper Deck Top Prospect Butch Huskey card (click images to embiggen): 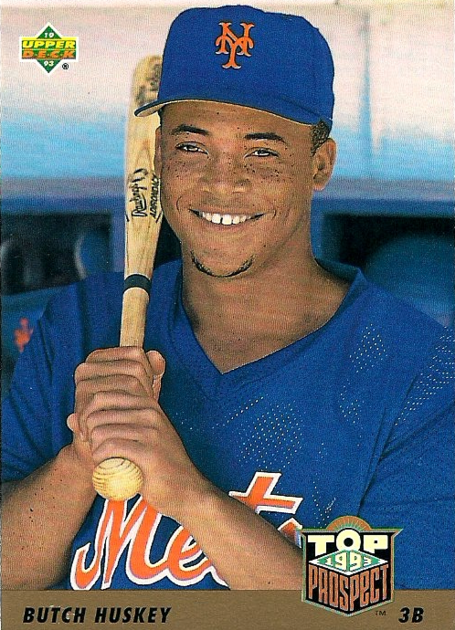 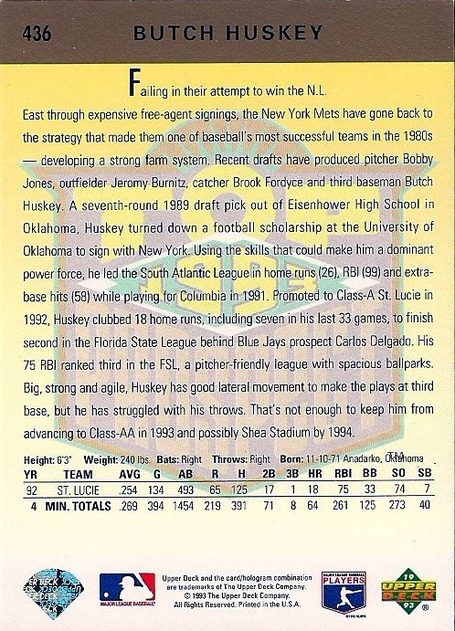