This Week In SNY Year In Review: Let's Check In With Kevin!

Share All sharing options for: This Week In SNY Year In Review: Let's Check In With Kevin!

TWISNY's sometimes-tagline "Checking in with Kevin is like checking in with heaven" is the leading choice for our entry into the resurrected Banner Day next season at Citi Field. Kevin was a TWISNY staple this season and we cannot thank him or the human carnival that populates his sideline reports enough for their efforts. Here is our look back at the season in "Let's check in with Kevin!".

Metsblog's Michael Baron made an appearance on-air during the Mets' 8-4 defeat of the Nationals. He's the photobomber blowing the bubble: 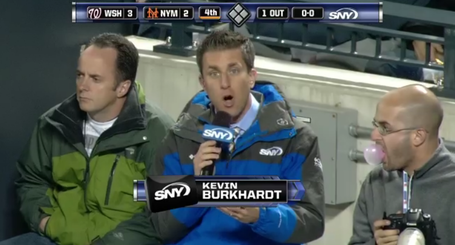 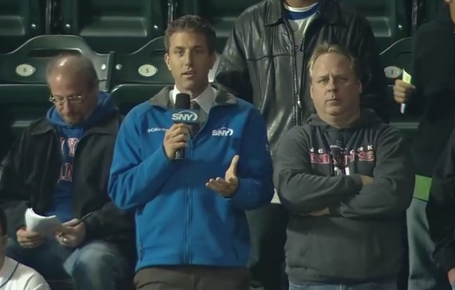 Whoa, don't mess with that guy.

A timeline of events -- Josh Thole was up to bat in the bottom of the ninth with the bases loaded in a tie game and one out. A simple sacrifice fly would have won it. Enter Kevin:

Kevin wants to jinx the Mets now, not three innings from now. Thole then grounded into a 1-2-3 double play to end the inning:

Mets fan and star of The Pest John Leguizamo threw out the first pitch and had Kevin ROFL during an in-game interview: 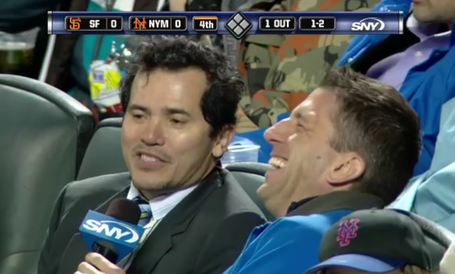 Is he havin' a laugh?

Kevin spoke with an astronaut in Houston because why the hell not? 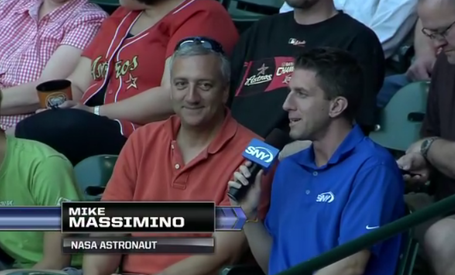 This edition of "Ask The Booth" was just an excuse for SNY to showcase the cast of its new show Don't Go Burkin' My Hardt, which is billed as a Flushing-centric version of Entourage: 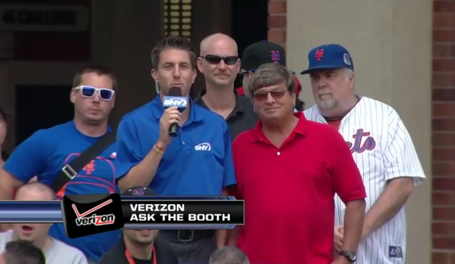 It was a rainy night in Chicago, and Kevin came prepared: 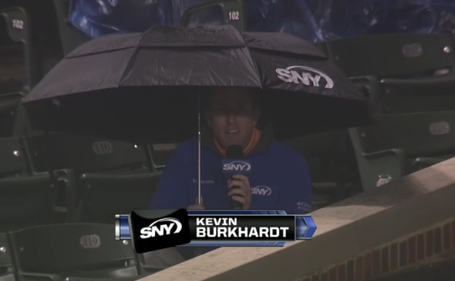 Kevin used the non-word "irregardless" during an eighth inning report, prompting a fusillade of tweets from Mets fans. His response: 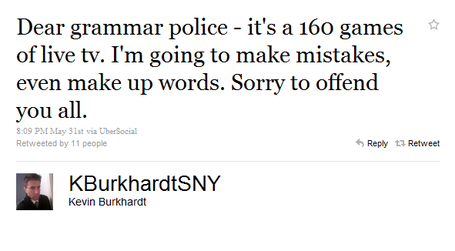 We feel for him, live television can't be a breeze. The grammar mistake in the tweet is also unfortunate. Here's how he should have handled it: 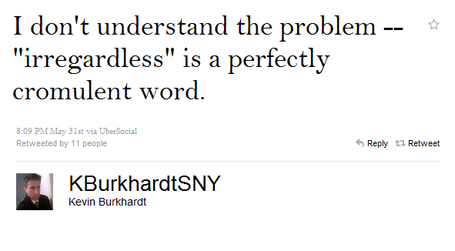 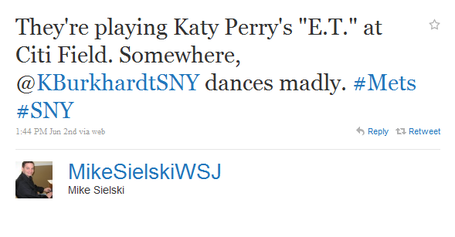 Perhaps Perry is singing about Kevin on her E.T. track?

Kevin joined Gary and Keith in the booth: 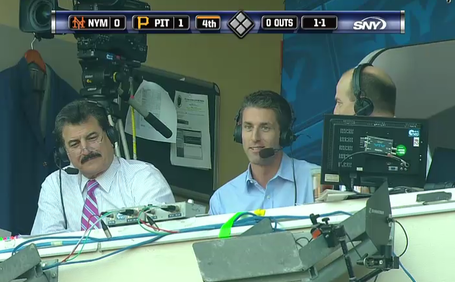 He did play-by-play, reported on Sandy Alderson's press conference earlier in the day and provided opinion -- a jack-of-all-trades. Touch 'em all Kevin, you deserve it!

All eyes were on Kevin during this mid-inning report but they should have been on the tobacco-packing Braves cameraman in the background: 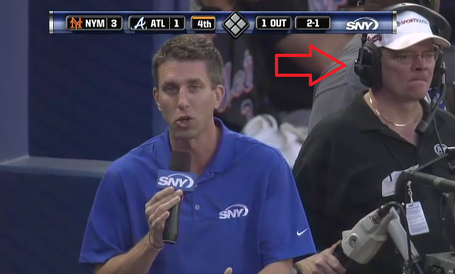 As a sports television employee, he should have known Kevin's role and surmised that he too was on-air. Apparently he did not -- he spit in his dip cup and ewwwww: 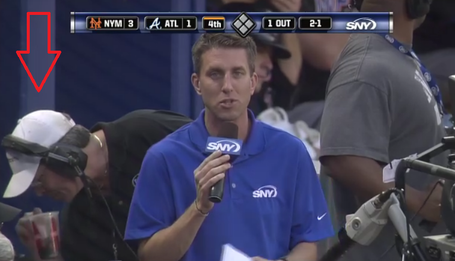 Let's check in with Eamon! Kevin had the day off and his replacement was someone named Eamon McAnaney. According to the Internet, McAnaney played lacrosse at Notre Dame, has worked in sports television production since the mid 1990s for various outlets and moonlights as a shouter on late night SNY programming. Here he is in action: 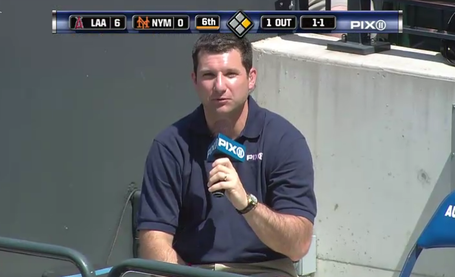 Sitting down during a report? That's poor, Eamon, that's poor. And it looks as if the SPF on Eamon's sunscreen wasn't high enough. Fair Irish-American skin can't handle three hours in the sun.

Some of Kevin's buddies made the trip to Detroit for their friend Smitty's bachelor party: 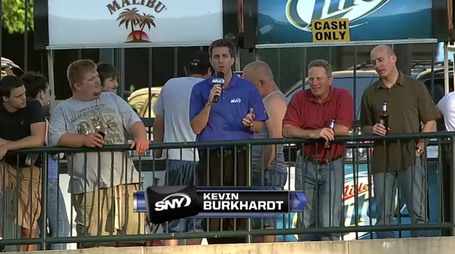 That's Smitty on the far left. They hung out at some Detroit landmarks, specifically:

After the game, at an ungodly hour of the night, Kevin reportedly lead a spirited rendition of Pink's "Raise Your Glass". So raise your glass if you are wrong -- in all the right ways!

Kevin took a page from the Eamon McAnaney Book Of Sideline Reporting by sitting in a chair during a report: 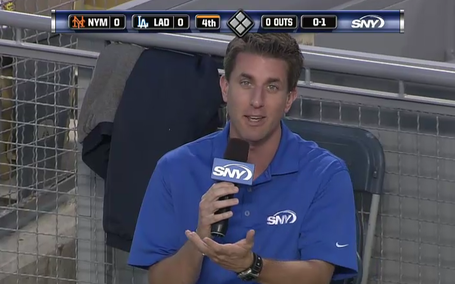 Can we get the man a La-Z-Boy please? He has almost 20,000 Twitter followers. That looks like a chair you'd sit in at a Boy Scouts meeting in a church basement.

The broadcast briefly turned into a television adaptation of The Outsiders: 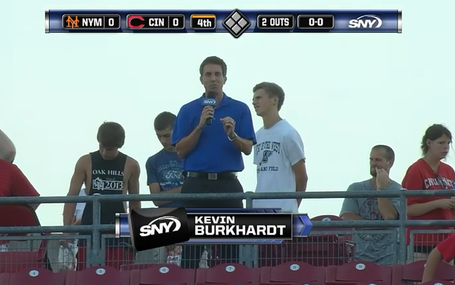 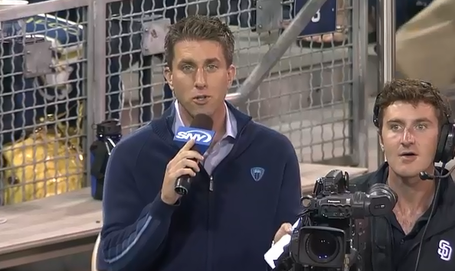 Kevin and Barry see each other just a handful of times each year. They shared a few laughs in between innings, reminiscing about how their mother used to force them to get the same haircut.

Kevin sent out a Tweet with a picture of his San Diego dinner: 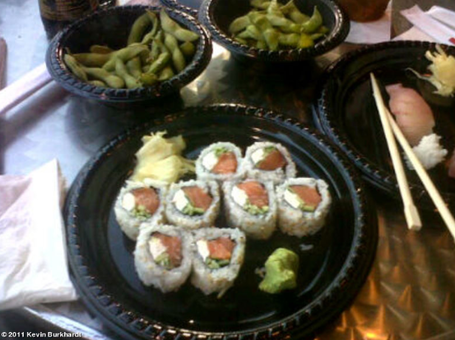 TWISNY has an eye for sushi and can say with confidence that Kevin was eating -- wait for it -- a Philadelphia Roll! It's made with salmon, cucumber and cream cheese. Delicious, yes, but it's Philly. Say it ain't so, Kev! Anything but a Philly Roll. You might as well put on a Shane Victorino jersey before digging in. Traid.

Earlier in the season, Kevin was yucking it up with John Leguizamo. This time it was Twitter machine Logan Morrison who had KB in stitches during the pregame show: 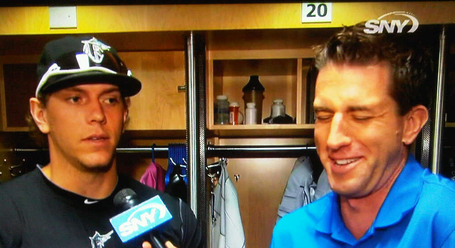 I think it was the old "pull my finger" routine.

A surefire way to make TWISNY -- sit next to Kevin and make a ridiculous face: 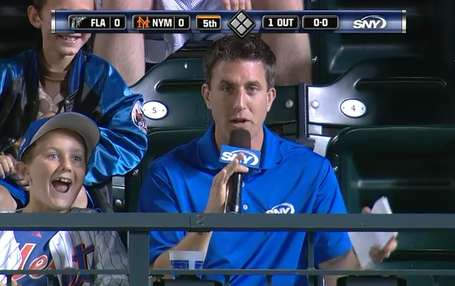 Congratulations kid, you are a hero to the dozens of TWISNY readers.

Listen up paparazzi, we understand that Kevin is a huge star now, but could you please give the man some room to work?: 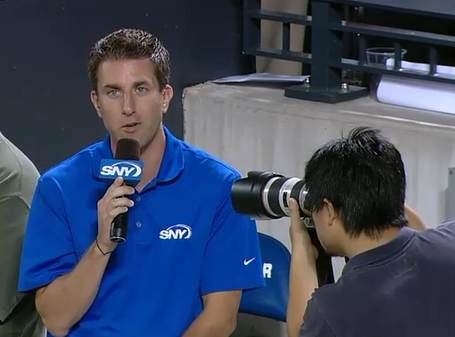 Earlier in the season, we met Kevin's fraternal twin brother Barry, the cameraman from San Diego. We then caught a glimpse of Kevin and Barry's hipster older brother, Lorenzo: 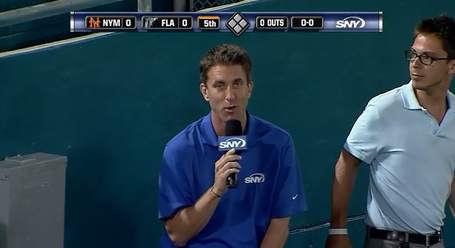 Lorenzo (don't dare call him "Zo") writes a column for the Miami counterculture magazine Squeeze. He isn't close with his brothers and only approached Kevin to silently mouth "sellout" to him.

If we had to pick a single image to convey what TWISNY is all about, it might be this: 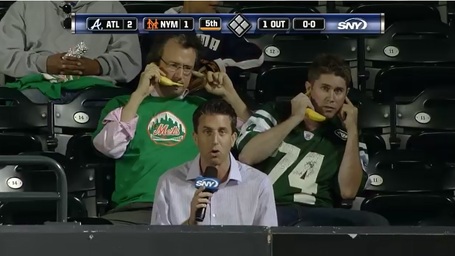 The fans are literally going bananas for Burkhardt.

Let's check in with... Carlin?! Kevin and SNY studio host Chris Carlin switched jobs for the week. Here's Carlin on the sideline: 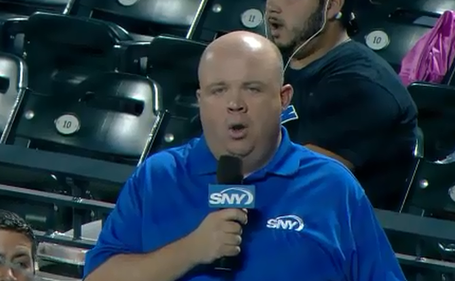 And here's Kevin in the studio with Bob Ojeda: 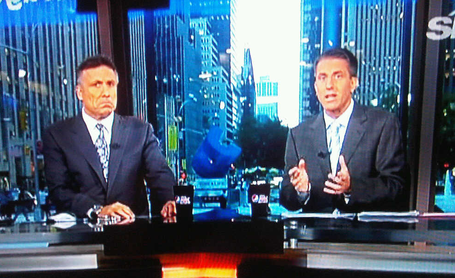 Why so serious, Bob? Is SNY grooming Kevin for a "face of the network" type of role? If yes, TWISNY approves, strictly for the boom in material it would provide.