We've already reached the silly stage in the Jose Reyes Offseason Sweepstakes, where the shortstop's every move is interpreted much the same way May Day Parade formations once were by Kremlinologists. The Mets front office is quiet. Reyes' camp is quiet. We know of many teams rumored to be interested in him, but have very few facts. This, plus the NBA lockout, leaves a lot of real estate to fill in the back pages. Hence, a plethora of rumor, innuendo, and what-ifs disguised as reportage, or taken as such by fans desperate for something more concrete. Oh, and it's only November 9, by the way.

Randy Medina at The Apple poked fun at this today with a post in which Reyes' choice of a turkey sandwich for lunch is open up to interpretation. Does turkey mean he'll leave or stay?! Sandwich enthusiast Ted Berg makes a guest appearance. It was all good fun, and we all had a jolly good laugh. 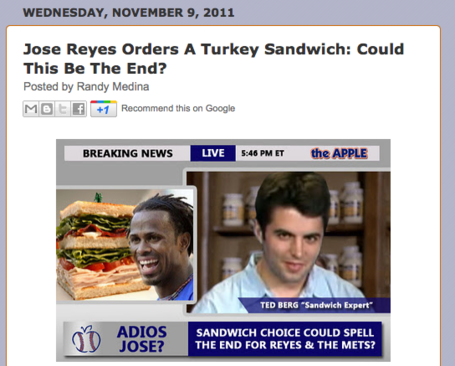 Amazingly, however, today's New York Post contains an article that is every bit as ridiculous as reading the sandwich leaves to divine his intentions. Kevin Kernan has dipped his toes into the waters of lyrical interpretation to see what Reyes' reggaeton song "No Hay Amigo" tells us about his next destination. Seriously. 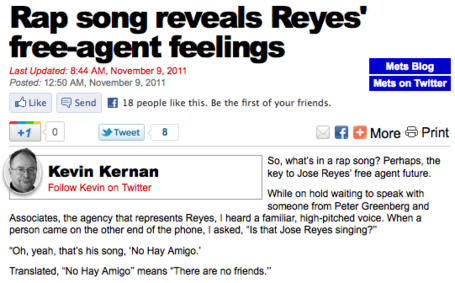 According to Kernan, the lyrics to this song--which essentially say that friends can't compare to cold hard caysh--clearly indicate that Reyes has written off the Mets and will sign with the glitzy Marlins.

Now, could Reyes sign with the Marlins? Anything's possible. Miami has already told anyone who will listen that they have money to spend and want to spend it ASAP (which is a great way to get bang for your buck, by the way). The team has already reached out to Reyes and will meet with him today. But the latest rumor says that the Marlins want to offer Reyes a three-year deal, which says to me that even they are cautious about handing out too many years to him. If the team that's hottest to trot feels this way, you can surmise all of his other suitors have similar misgivings.

I understand the inclination to freak out at the thought of Reyes going to Miami, but just because Sandy Alderson is playing his cards close to the vest doesn't mean he's not playing. Bob Klapisch wonders why the Mets are being "so passive" so far, as if spring training is going to start tomorrow and the team's made no moves. It's November 9, Bob. The Winter Meetings haven't even happened yet. There has been exactly one offseason move so far (Melky Cabrera for Jonathan Sanchez). Maybe chill for a while, is what I'm saying.

If you believe Reyes will go to the Marlins, you can argue that. You just probably shouldn't argue it based on interpretations of a rap written nearly two years ago that, for all we know, Reyes himself didn't necessarily write.

If the major arc of Kernan's "article" that doesn't kill you, perhaps this line in it will.

Marlins ownerJeffrey Loriahas told me his new ballpark will be the best ballpark and I believe him.

"This just in: Owner says stadium owner built is amazing." Wow, what a scoop!

Here's another one that most of the sports press hasn't sniffed out yet: It's November 9. Chill the eff out, folks.