David Wright made some changes last year. Maybe you noticed.

Let's try to quantify those changes with a look at his work at the plate with the use of all the advanced analytics at our disposal. Heat maps, batted ball distance and angle -- what can these things tell us about David Wright in 2011?

This is part of our ongoing series trying to determine the impact of a hitting coach in general -- and Dave Hudgens in specific. We're going to begin breaking down some key Mets players. Just a handful of Mets played enough in 2010 and 2011 that we can do this sort of analysis with them, but we'll work with what we have.

On to Mr. Wright.

We showed in our swing metrics pieces that Wright saw more pitches per plate appearance, swung less at pitches outside the zone, and made more contact in 2011 than he did in 2010. In terms of swinging outside the zone, and seeing more pitches per plate appearance, Wright was also better than his career levels in 2011. Hudgens might have helped him become more patient and selective.

But it is that process -- picking the right pitches to swing at -- that is also interesting. How did Hudgens do this? How exactly did it play out at the plate? What were the results when seen in the eye of batted ball distance and angle?

It's no brain-buster that Wright has had some issues with balls on the outer half of the plate. Take a look at his heat map for 2009-2010. See that blue hole that's in the middle of the strike zone but on the outer half of the plate? That's where Wright was worse than league average. There are other holes, but that one in particular is interesting. 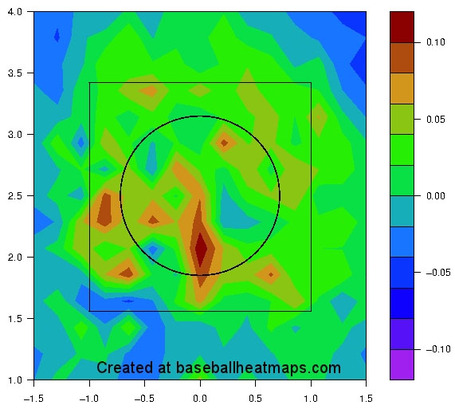 Wright was pretty good down the middle -- most players are -- but he had a hole on the outer half. Compare his work in 2011 to the two previous years. Now the hole is gone: 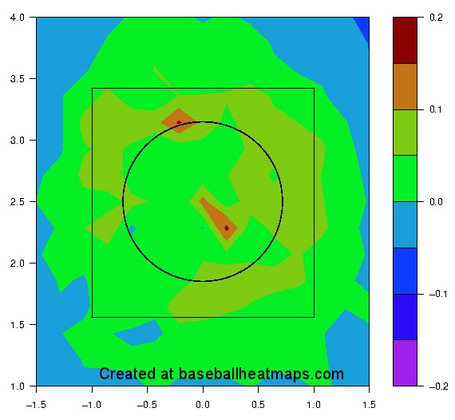 What was once a problem for Wright has become a strength.

How did he do it? Easy, says Dave Hudgens -- he just had to work on staying inside the ball and going with the pitch. When he's going to all fields, and especially driving the ball in the middle third of the field, said Hudgens, is when he's at his best.

We can check this work from another angle. Specifically, batted ball angles. If he was too pull-happy in 2009 or 2010, Wright's batted ball angle would show it. On the chart below, -45 means the left field line, and 45 means the right field line. In other words, since Wright is a righty, negative is more pull-happy and righty is more "push"-happy. Maybe you'll see something strange about his ten-home run 2009 season: 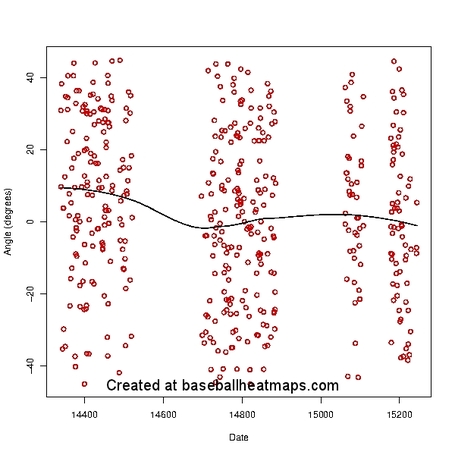 Yeah, Wright was way too happy to go the opposite way in 2009 and it seems to have hurt his home run power. Then he pulled the ball more in 2010, and that might have hurt his ability to make contact. 2011 was the tale of two half-seasons, but it might have also shown that he can have a happy medium going forward. One where he's going right up the middle, just like his hitting coach wants for him.

How has this affected his non-home-run power? Take a look at his batted ball distance over the same time frame: 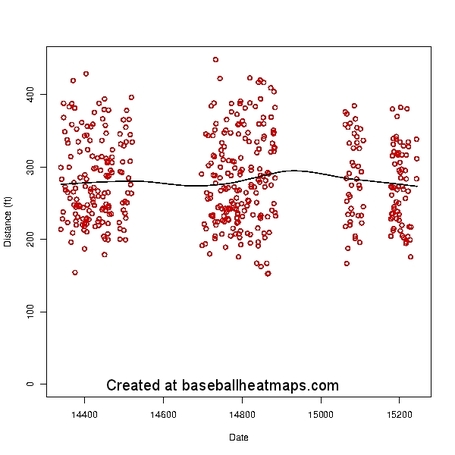 He got a little more power when he went a little more pull, and then he lost some of that power gain last year when he evened out his approach. His ISO reflects that swing -- .140 in 2009, .220 when he was pulling it in 2010, and .172 with his evened-out approach in 2011. It is worth noting that his wOBA, which reflects his overall offensive production, did not like the 2011 approach, as it hit a career-low, but you never know how his back injury affected his power production. You can see what looks like a downward tilt to his batted ball distance after returning from injury. Let's call the batted ball distance data inconclusive.

Given the fact that Wright's strikeout rate hit a career-worst in 2010 (24%), when he was pulling the ball more and had a hole in his swing on the outer half of the plate, we'd have to say conclusively, once you zoom out and look at the whole picture, that Wright has made some progress in the past two years.

In fact, given these pictures, it's hard not to say, definitively, that Dave Hudgens has been good to David Wright.

Thanks to Jeff Zimmerman for his site, baseballheatmaps.com, for the images used in this piece.