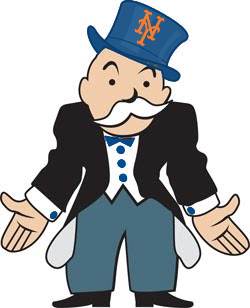 The Mets' financial situation is worse than we thought. I've written a few things over the last week or so, and during the process, I keep finding new facts alleged by the media about the dollars and cents -- or lack thereof -- which make this team run.

All these items are spread over tens of articles spread across, at this point, a half dozen different publications. After the jump, I try and cobble as much of it together as I can, with copious amounts of links.

Do the Mets have any money?

This isn't an easy question to answer directly, but the short answer is, "probably not," as explained below.

Those aren't my words -- they're Sandy Alderson's. Alderson, in the same piece, said that the Mets had lost $70 million, but wouldn't say whether that was in 2011 alone. If it is, that'd be perfectly consistent with what Fred Wilpon said earlier this year, as well as a more recent report from the NY Post. And it's also close to what Forbes came up with -- $77 million in losses, if you don't include SNY profits (discussed below) -- if you assume operational revenue is for 2011 is $0.

We don't know what the exact number is -- it could be $40 million, $70 million, $100 million, etc. We also don't know if the losses Alderson (or, for that matter, Wilpon) was talking about included the Mets' share of profits from SNY. We don't know, explicitly, whether the losses are operational losses or whether they include debt service, but given the size of the loss, debt almost certainly needs to be one of the factors.

Let's look at the Mets' revenue.

Forbes estimates that the Mets had $268 million in revenue in 2009 and $233 in 2010. I can find estimates for three big chunks of money, excluding its share of profits from SNY.

1) The Mets are getting $25 million a year from Citibank for naming rights of Citi Field, per Adam Rubin. Note that he believes that most people have it as $20 million.

3) SNY pays the Mets an estimated $60 million to $70 million for the rights to broadcast Mets games, according to the New York Times (second to last sentence). Note that this is independent of (and in excess of) any of SNY's profits which flow to the Mets.

With a player payroll of roughly $150 million, it's pretty clear that the team's debt service is what's keeping these losses so high.

So, how much debt does the team have?

Forbes estimates that, going into the 2011 season, the team owed $1.07 billion. Most of that -- $695 million -- is tied to Citi Field construction, but $375 million is team debt. This does not include the $25 million emergency loan MLB made to the team, which only came to light after Forbes made its estimations.

The Daily News has the Mets' debt at $427 million (and may attribute that number to Wilpon; their language is unclear and may be intended to mislead). Whether this includes the $25 million MLB loan is unlikely but questionable; whether it includes Citi Field debt is unknown.

How does that turn into (say) $70 million in losses?

Again, let's go to Forbes: they assert that the Mets owed $52 million on loans regarding Citi Field, and another $25 in debt service to that $375 million in team debt.

How did the Mets cover that budget deficit?

We don't really know. Some of it -- probably around $40-50 million -- came from their SNY stake. Another $25 came from the loan from MLB. That comes close to, and might even exceed, $70 million. However, the New York Post (third to last sentence) claims that the Wilpons put $38 million into the Mets this year in order to keep the team solvent. Where this money came from is unknown; it may have simply been the Mets' share of SNY profits; it may have been additional.

Can they cover it in the future?

As of now, almost certainly not. The team hasn't paid back the $25 million emergency loan from MLB as of December 1. Further, Wilpon apparently told SI (per the Daily News) that the $200 million the Mets were hoping to raise by selling 20-25% of the team (discussed later) was already armarked, with $100 million going toward operating costs -- basically, money set aside to keep the Mets solvent.

This is true, but context matters. The Times states that SNY does about $120 million in free cash flow a year, which we'll use as an approximation for earnings before debt service. SNY has about $450 million in debt, per that same article as well as others. Given reports (mentioned above) that the team earned $40-50 million from its SNY stake, and that the team owns 65% of SNY, the television station is probably clearing $75 million or so a year in profits. That's a ton of money when your expenses are in the $200-$400 million range -- in other words, SNY is extremely profitable in that its margins are great.

Margins? Why is that important to note?

1) It means that SNY's earnings can't really save the Mets, in and of themselves. While the Los Angeles Angels of Anaheim's recent TV deal earns them $150 million a year for the next 20 years, the Mets' arrangement with SNY is only starting to approach that. (I don't think the Mets could get $150 million a year in a negotiated contract, for what it's worth; and I think the Angels only did because of what's going on with the Dodgers -- and probably only because they signed Pujols.) So it's probably wrong to look at SNY as something which can, in and of itself, buoy the Mets indefinitely. Yes, SNY is insanely profitable, but that's only when you compare their revenues to their expenditures. Compare gross profits to the Mets' payroll and it's probably a negative number for a long, long time, if not forever.

2) It means that SNY's valuation is fantastic. It may be worth $1 billion -- that is, more than the Mets itself.

Wait: how much are the Mets worth?

Right now, the best guess is $700 million to $1 billion, excluding the team's debt. Before the 2011 season, Forbes estimated it to be about $757 million, down from $858 million a year earlier. The team is looking to raise $200 million in a mix of equity and debt and apparently, that equity is based on a valuation of $950 million. The Wilpons had previously stated that they'd sell up to 25% of the team, so this range makes sense given the decision to raise $200 million. Of course, this new $200 million raise is going slowly per one account (or well, per another) so perhaps the $950 million valuation is too high.

So the Wilpons are going to sell part of the team. Problem solved, right?

Twenty five percent of that is $50 million, but the Mets are hoping to raise $200 million -- that is, the full amount as if the team had no debt. In order to get that "full amount," the Mets have to do some weird things in the equity purchase contract -- things which muddy the waters.

The David Einhorn dealings contained an odd contractual clause. Einhorn was to pay $200 million for a non-controlling, non-voting stake in the team, probably around 33% of it. If that was the full deal, we'd have a pretty straightforward equity sale, putting the team's valuation well north of $650 million. (Because Einhorn's 33% would be non-voting, it'd be cheaper, on a per-share basis, than the Wilpons'.)

But that wasn't the full deal. Apparently, per the contract, the Wilpons had three to five years to pay back Einhorn's $200 million investment. If they did, Einhorn would still retain a roughly 17% stake in the team; if not, Einhorn would have the option to buy a controlling stake in the team -- totaling 60% ownership for one dollar.

The new investors the Mets are trying to attract are also getting a sweetened deal with an out clause. These investors are, collectively, buying $200 million in equity, but if after six years, they want out, the Wilpons will pay them back their investment plus 3% interest (compounded annually, I assume).

In six years, there's a very good chance that the Wilpons will need to come up with $240 million, give or take, to pay back these investors. After all, even if the Mets' valuation shoots up over the next six years, it'll be hard for investors/lenders to keep a very tiny (roughly 2 percent) stake in the team while forgoing a nearly $4 million profit payday.

OK, let's talk SNY. You said it was worth $1 billion... can't the Wilpons sell part, and get money out of it?

First, they don't own the whole thing.

SNY is owned by the Mets (65%), Time Warner Cable (27%), and NBCUniversal (8%). NBCUniversal is co-owned by Comcast (51%) and GE (49%), with Comcast operating it. The Mets' stake in SNY is a bit unclear -- I've read in some places that the Wilpons own SNY independent of the Mets, but I can't find a citation for that any more, and I've read things which suggest otherwise as well. It's probably a non-issue, though, as the Wilpons could reorganize the Mets' cap table to get around that if need be, I think.

The minority owners have some rights. We're not sure what those rights are, but in March, TWC and NBCU apparently threatened to block a sale of some of the Mets' share of SNY. And there's a good chance that TWC and NBCU have a right of first refusal over any sale, which, especially in NBCU's case, is interesting, as Comcast has a growing network of sports stations -- and no New York foothold.

Second, SNY has a LOT of debt.

As in $450 million. Apparently, the Mets/Wilpons, TWC, and NBCU refinanced the debt on SNY in 2007 and, in doing so, added a lot more debt so they could pay themselves a dividend worth, in total, $240 million. (Where that money went is anyone's guess.) Because of the debt, and because that debt went in part to the owners as a dividend, it's near certain that the first dollars of any such sale would go toward that debt. Basically, if SNY is worth $1 billion, it's only worth $550 million after the debt is deducted, meaning the Mets' share is worth about $357.5 million.

That doesn't mean the Mets couldn't recoup another $200 million or more by selling part of their interest in SNY. It does, however, mean that doing so would almost certainly cost them control of SNY, as Comcast or TWC would likely be purchasing the sold amount and adding it to their stake. In order to get $200 million out of SNY, the Mets would need to sell 36% of the network -- that's enough to give TWC a majority share or to make Comcast the lead shareholder.

Oh, and selling that much of SNY would effectively cut the $40 million or so SNY throws off to the Mets in half. That would mean the team is running additional losses of $20 million a year, which the Wilpons may not be able to survive.

Right now, the Mets are running serious losses annually -- even including their profit share from SNY. There's no easy way for them to get enough cash to run the team, unless the Wilpons keep putting money in (if they can), and the current plan has a $240 million price tag attached to it, due 2017. They could sell a lot of their SNY stake, but that'd be a very painful sale -- and perhaps one fatal to the Wilpons' efforts to maintain their ownership of the team.

At least the Wilpons don't have to worry about Bernie Madoff any more.

Untrue: Irving Picard is still trying to recover money from the Wilpons -- somewhere between $83 million and $386 million.