The Mets new shortstop doesn't quite have the tools of that the Mets old shortstop. He doesn't have the wheels or the dreads of a Jose Reyes, nor does he have his pop. But so far, Ruben Tejada has shown a plus walk rate, which isn't something Reyes did every year. Can Tejada ride a good glove and a good eye at the plate into some valuable years for the team? That might help soften the blow.

Let's take a look at his heat maps, dissect his batted-ball distance plots, compare him to similar young middle infielders, consider his entire statistical history by including his minor league work, and talk to his hitting coach to get an idea of how we might project this project.

We've already looked at his peripheral plate discipline stats and discovered that he made some strides between his rookie and sophomore years. He doesn't see more pitches per plate appearance than the league, or even the Mets team, but he is seeing more pitches per PA than he did last year. He made more contact in 2011 than the league did, too. Making contact is a strength for him, even -- his career swinging strike rate (7.0%) is significantly better than league average (8.5% most years).

So far, so good. Tejada is becoming more patient and has always made contact. What's the next step?

Dave Hudgens says that he's told Tejada many times that patience is a way for him to "separate" himself from the pack. With his good glove, Hudgens says, all Tejada needs to do is continue to add patience to his package.

Hudgens is getting through to the youngster.

His heat maps tell the same story. Here are the run values on pitches compared to league average in 2010: 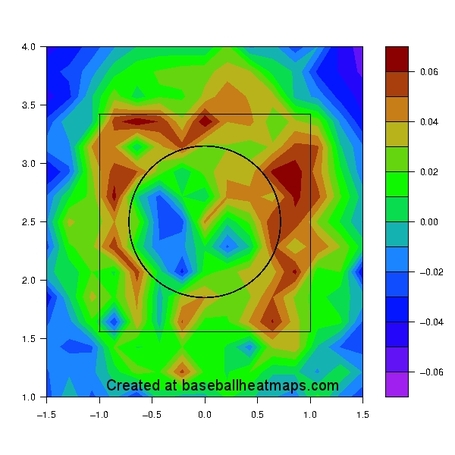 His ability to make contact and show good patience probably served him well on pitches that were on the borderline. Hence the red swatches outside of the middle of the zone. It's a decent heat map, but it also has a huge hole or three in the middle, which is where most players find their power. Let's look at 2011: 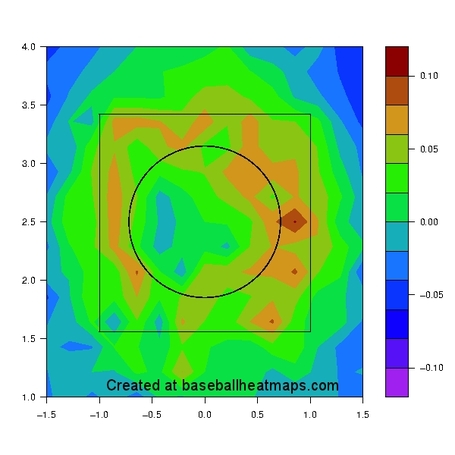 At first glance, this heat map looks less exciting. The reds are less red! Where did his power go!

The reasons this heat map represents a change for good are complicated. The easiest way to laud Tejada for his work based on these pictures is to say that he shrunk his hole and began to put up league average numbers (or slightly better) in the middle of the zone. That alone is huge.

But Hudgens says that patience is also related to fear. Tejada will have some work to do "getting feared," he admits, but that being aggressive on pitches down the middle is an important part of this process. Maybe he won't hit a ton of home runs, but if he continues to stroke doubles on pitches down the heart of the plate, pitchers will be forced back to the edges of the zone -- a place where Tejada has shown he has some ability to discern balls from strikes.

This fits into the narrative of the sophomore season. In his first year, Tejada survived mostly by not swinging. He was "tentative" as Hudgens puts it, and he wasn't able to do much with pitches down the middle. In his second year, as Tejada told our own Rob Castellano, Tejada began to get more "comfortable" at the plate. That comfort translated into more aggressiveness on pitches down the heart of the plate, which is something that Tejada will have to show in order to continue to get walks.

He doesn't have much home run power. You can see that in his batted ball distance graphs: 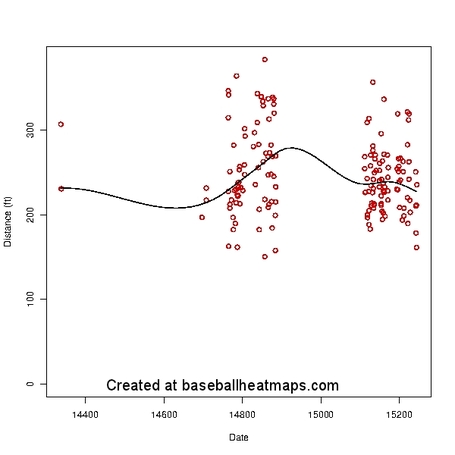 David Wright, for example, had a batted ball distance that hovered close to 300 feet on fly balls, home runs and line drives. Tejada's number is much closer to 200. And no amount of pulling the ball will serve Tejada well. He should aim for doubles rather than home runs.

But if you look at the end of 2010 (the first clump) and the beginning of 2011 (the second bunch of dots), you see that he made progress even when it came to power. In fact, since he didn't hit a home run in his second season, and you can see he doesn't have many long drives on his resume, it seems like he focused on doubles in a way.

In other words, he focused on finding a pitch he could drive to the best of his abilities.

We once ran some comps for Tejada after his rookie season, and they weren't incredibly exciting. Mark Lewis showed up as a reasonable comparison. Re-run the search though -- this time look for middle infielders that put up a .330+ OBP in more than 500 PAs before they hit 22 years old -- and the results are a little more promising. Take the power players away (players with a .420 slugging or less), and Tejada had the 15th-best season on the list:

Now that's a better list of characters. The worst name from the free agency era ahead of him on the list is probably Willie Randolph, and he had a decent career. Shortstop Pee Wee Reese played in a different offensive environment, but he was a glove-first dude with patience, and he could provide quite the model for Tejada. This is a list the Mets probably wouldn't hate to see.

Brian Cartwright, the brain behind the OLIVER projections on The Hardball Times, graciously submitted his thoughts about the OLIVER projection for Ruben Tejada -- .261/.317/.339. As you can see, Tejada has made great strides in his limited time, but if we look at larger sample sizes, we may mute his upside some.

I believe in large sample sizes and the THT Forecasts' MLE section is an application of that -- summing the translated performances at any level into a composite line for the entire year. A high rate in part of a season in the majors is balanced by a lower rate in the minors the rest of the season, or vice versa. When comparing the MLEs from one year to the next it is easier to see the player's true talent level, and how it might be changing.
A typical 20-year-old increases his BB% by 6.3% over the year before, a 21-year-old 6.0%, while Ruben Tejada has increased his walk rate over the past two seasons by about 25% in each.
His last four season's MLEs

By combining major and minor league performance, Cartwright paints the picture of a player that has made real improvements over the past three years, but also still has a more modest projection. At his new position -- shortstops hit .261/.314/.374 last season -- Tejada would fit right in and his glove could still make a difference. But for all the visions of Edgar Renteria dancing at the keystone in Queens, there are reminders that faithcasting can be dangerous.

The transition from eighth in the order to the top of the order could come some time this year, agreed Hudgens, and with it will come the biggest test of Tejada's career. Whether or not the player can manage that transition will be up to his ability to continue being aggressive in the zone even when a pitcher isn't looking forward to the batter behind him.

At least Ruben Tejada is progressing well on many fronts, and is in better company now. He won't ever be Jose Reyes, but his glove and patience might make him a very valuable player.

Thanks to Jeff Zimmerman for his site, baseballheatmaps.com, for some of the images used in this piece.