When I posted my story on the question of Bobby Valentine: True SABR?, I promised that would be my last Bobby V post for a very long time. AA colleague Chris McShane doubted my ability to make good on this promise; an obvious choice, in retrospect, because here we are.

The reason I'm writing about Valentine yet again is because there's someone else who's been writing about him quite a bit this week, and in far less glowing terms. That would be Keith Olbermann, pundit and baseball fan, who wrote a lengthy blog post detailing exactly why he believes Valentine "was clueless" when he was managing the Mets. During Valentine's press conference on Thursday, he tweeted quite a few snide remarks about the proceedings. He even cited Murray Chass's attempted hit job on Valentine as further evidence of Valentine's unfitness for the job, or any sort of gainful employment among civilized humans.

I was seriously taken aback by the frequency and virulence of Olbermann's attacks. I've seen plenty of people question the choice of Valentine as the new Red Sox manager, but only Olbermann made it seem like a sign of the End Times at Fenway. Citing a crank like Chass--one with a long, unfair history of attacking Valentine almost as often as he hatchet-jobs Mike Piazza--indicates a certain level of desperation in trying to prove his point.

What I found most strange is that, while there are definite blemishes on Valentine's resume, Olbermann's post wasn't a laundry list of complaints. Rather, it concentrated on game 2 of the 2000 World Series, and a decision Valentine made that (to Olbermann) betrayed a fatal lack of judgment on the manager's part. He goes so far as to say it "might be the dumbest World Series managerial move since Casey Stengel completely messed up his 1960 pitching rotation."

I wasn't on the scene for game 2 as he was (he was a sideline reporter then for FOX; yes, FOX), but I've delved deeply into that season and series. As such, his post strikes me as weirdly nitpicky, devoid of context, and indicative of a larger narrative surrounding the 2000 Mets. 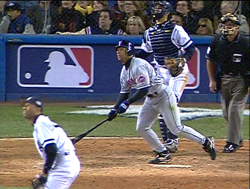 The decision that so appalled Olbermann came in the top of the ninth. The Mets had improbably clawed within one run after trailing 6-0, due in large part to a stunning three-run homer Jay Payton knocked off of Mariano Rivera, who seldom gave up longballs. The next batter due up was light hitting shortstop Kurt Abbott, and Valentine left him in to face Rivera; he explained himself later by saying he had no shortstops left on his bench. Abbott struck out looking to end the game, which allowed the Yankees to hang on and take a 2-0 lead in the series. (Olbermann separates Looking into its own one-word sentence and italicizes it for good measure, just in case you missed it.)

Olbermann counters Valentine's excuse by saying that there were better hitters available he could have turned to, and he could have winged it at shortstop with any one of them if the Mets somehow forced a bottom of the ninth. It's a fair argument. In fact, I'd be inclined to agree with it were it not for one very big factor. Namely, that whoever pinch hit for Abbott would still be facing Mariano Rivera.

The remaining options on the Mets' bench might have been better hitters than Abbott to varying degrees, but Rivera was a great leveler. All batters had a similar record of futility against him, particularly in the postseason. Rivera has given up 11 earned runs in 96 career posteason appearances, and Payton's HR accounted for two of them. Could Rivera have been tiring, since he pitched two innings in game one? Possible, but wouldn't count on it. Yes, in most situations, someone like Matt Franco or Bubba Trammell would have been a better choice. Against the greatest closer of all time, it's probably a lateral move.

Can you say that Valentine still should have taken a shot with someone else, even if it provided a .001% better chance of success? You certainly could. It's not Olbermann's contention that's unreasonable so much as the tone he uses to make it. Valentine's move (or lack thereof) is not simply a questionable one; it is one of the worst ever. Valentine's failure to execute it is presented as a glaring, irrefutable indication of his incompetence. To say it "might be the dumbest World Series managerial move" is neither fair to Valentine nor dumbness.

It's also important to put this game in perspective. This was, after all, the same evening as the infamous Shattered Bat Incident between Piazza and Roger Clemens. Before it started, the game raised the already sky-high hype level of the Subway Series even further, because it was the first time Clemens faced the Mets since he beaned Piazza, seemingly deliberately, with a 96 mph fastball.

Clemens' bat chucking cast a pall over the entire proceedings and made everything that followed seem weird and unnecessary. If you watch the game, you'll notice that even the Yankee Stadium crowd feels uncomfortable with cheering too loud. It was one of the most disturbing World Series games ever played, and if a manager did not make the best moves by the end of it, I can understand the extenuating circumstances.

Last year, I revisited the game, watching it again and surveying the contemporary accounts, to write this recap. I came to the conclusion that Clemens' heinous act--once he inexplicably got away with it, as the umpires somehow chose not eject him--was a brilliant bit of gamesmanship. He placed the Mets in an impossible spot. They could retaliate and be seen as animals; just imagine what kind of condemnation would have rained down on them if they dared start a fight during a World Series in the sacred confines of Yankee Stadium.

The alternative was to keep their heads, not let anyone (least of all Piazza) get ejected, and try to play the game. The Mets chose this course of action, and doing so meant they would have their "fight" questioned forever after. They now were said to be lacking something the Yankees had: the will to win at any cost.

The Yankees were in the midst of an historic dynasty. Anything they did to maintain that dynasty was justifiable, since winning is its own excuse. Clemens was such a "winnner" he'd hurl projectiles at people to make it happen! If you questioned that, you questioned excellence itself.

Olbermann's criticism of Valentine is essentially this POV in reverse: to praise Valentine (and his Mets) is to praise failure. I noted that he chose to applaud Clemens' performance that night (eight shutout innings, nine Ks) while also blasting the Mets for not "charging the mound or anything"--or mentioning the likely source of Clemens' sudden dominance of a team that had formerly owned him.

He harps on the fact that Valentine's teams have never finished in first place, ignoring the fact he was forced to go head-to-head with some juggernauts, like the McGwire-Canseco A's when he managed the Rangers. Valentine's inability to beat Bobby Cox's Braves or the Yankee Dynasty means he was a failure, in Olbermann's book. The list of great baseball figures who never finished first is a long one, and it is an unfair metric by which to judge anyone, at least without any other context.

As a sports fan--as a human, really--I prefer not to believe that every team that doesn't win it all should be regarded a failure. I also prefer not to look at one questionable decision made in an absolutely insane game and extrapolate a person's worth from it.

I realize that asking Olbermann to tone it down is like asking the ocean to quit the whole "being wet" thing. Still, I wish he hadn't couched his critique in his usual language of worsts and absolutes. It was a singular decision made at the tail end of a brutal game against one of the best postseason pitchers ever. It's like punching someone in the arm for 10 minutes and expecting them to do pushups.

If this is really the worst thing you can say about Valentine, you'd be better off saying nothing at all. But we all know silence is not in Olbermann's skills set.