Edgardo Alfonzo was left off the 2012 Hall Of Fame ballot, despite being deserving of the minor honor. Poor Fonzie.

Share All sharing options for: Edgardo Alfonzo Left Off Hall Of Fame Ballot

The 2012 Baseball Hall of Fame ballot was released Wednesday, featuring 13 new names in addition to the 14 holdovers from last year. None of the 13 additions to the ballot are worthy of induction but simply being included on the ballot is a nice tribute. It's a simple way of recognizing good-not-great players and giving fans a reason to check out some old Baseball-Reference pages. Who knew Brad Radke had such a fine career?

Unfortunately, top 10 all-time Met Edgardo Alfonzo was left off the ballot despite being eligible, while the likes of Ruben Sierra and the atrocious Tony Womack were included. Here is a look at where Fonzie ranks compared to the 13 new additions through the lens of wins above replacement (WAR). rWAR = Baseball-Reference WAR; fWAR = FanGraphs WAR: 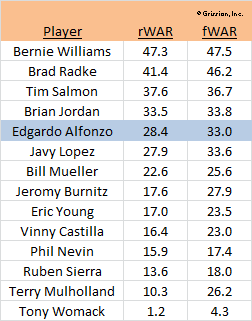 Alfonzo is 5th in rWAR and 6th in fWAR within this group. He's certainly more deserving than Eric Young, Vinny Castilla, and Phil Nevin, in addition to the aforementioned Sierra and Womack. Four of his seasons were elite and another four were averageish. His prime years were spent with the Mets. However, he fell off a cliff after signing with the Giants following the 2002 season and was out of MLB for good by age 32 in 2006. Perhaps longevity was an issue for the ballot makers. Still, his OBP-heavy 104 OPS+, combined with terrific defense and solid baserunning, made for a quietly valuable career. Even if approximately half of that career value was accumulated during one transcendent, 6-for-6, 3-homer night in Houston in 1999.

Matthew Pouliot of HardballTalks says "it's a crime that Edgardo Alfonzo isn't on the Hall of Fame ballot." I'll stop just short of that, but seeing the third member of The Best Infield Ever make the ballot would have provided a warm, Hall of Fame-sanctioned moment of nostalgia for Bobby V's Mets. And offered some hope that the Veterans' Committee will take a second look at Rey Ordonez's career.