Who Should Bat Leadoff For The Mets Next Season?

Share All sharing options for: Who Should Bat Leadoff For The Mets Next Season?

The Winter Meetings and non-tender deadline have passed and it appears the Mets' free agent spending coffers are empty. Barring a traid of a cost-controlled youngster, there probably won't be any major transactions to talk about the rest of the month. So it's a great time for a seamheady discussion about the Mets' leadoff spot.

Terry Collins caused brief hysteria a couple weeks ago when he mentioned that Andres "Career .318 OBP" Torres might bat leadoff next season. True SABR among Mets fans are hoping that it was just Collins offering some praise for a new addition (nothing wrong with that) and not a steadfast policy statement. Torres can draw a walk but will be 34 years old in January following a pronounced down year at the plate. He has a place in the lineup, just not at the top of it.

Who should replace the dreadlocked one at the leadoff spot? Preferably one of the Mets' three or four best hitters. Of the current projected 2011 starting lineup, this includes Ike*, Lucas Duda, Wright and Daniel Murphy. Jason Bay, Josh Thole, Ruben Tejada and Torres round out the expected starters. More on Thole and Tejada in a bit.

OBP is the most important statistic for a leadoff batter. Stolen base capability is not crucial, given that the power hitters bat soon after. Taking risks with the big boys coming up isn't wise. However, speed in general is a nice bonus, a skill to take into account if choosing between otherwise equally qualified players. Home run ability is wasted in the leadoff spot considering how few runners are on base. So despite Ike and Duda's projected strong on-base skills, they are more suited for the traditional power spots in the lineup. Wright will probably be better than Murphy in OBP, SLG and walk rate. If Wright's 30 home run power returns, he is more suited for further down in the lineup. But if he's .307/.390/.447 Wright, the top of the order it is. Murphy's on-base ability is heavily tied to batting average -- more walks would be desirable -- but he's coming off a fine season at the plate and should be entering his prime in 2012.

A case can be made for both Thole and Tejada, considering their walk-heavy on-base skills. However, both also have suspect secondary abilities, namely power and speed. The lack of power is the biggest problem -- Tejada had the second worst isolated power in the league in 2011; Thole was tenth worst (minimum 350 plate appearances). Again, OBP is king in the leadoff spot but maximizing plate appearances for the team's best overall hitters is also a consideration.

I'm thinking Murph's rehab goes swimmingly and he notches a ~.790 OPS, Wright binges on home runs, Thole puts up a .270/.350/.350 line and Tejada comes down from his thoroughly average (but still impressive) 2011 showing. If tomorrow were Opening Day, Murphy would be my choice for the leadoff spot with Wright and Thole close behind. However, question marks litter the entire lineup and early season performance should play a role in determining who bats where. Plus, it's worth remembering how important lineup construction is to winning ballgames: 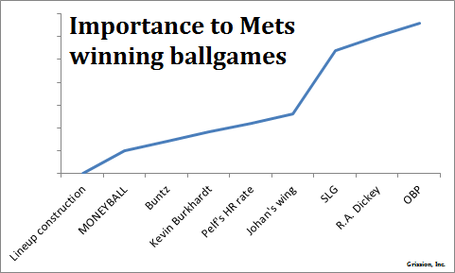 * - I find it awkward referring to Ike Davis as "Davis". So Ike it shall always be.