Melvin Mora called it quits on Thursday, officially ending his 13-season career. As a self-appointed 1999 Mets trainspotter, this news saddened me, as it means the only active major leaguers left from that team are Octavio Dotel and (technically) Jason Isringhausen. (Edgardo Alfonzo, still plugging away in the Venezuelan winter league, remains a gray area.)

Mora spent most of the 2000s with the Orioles. He had an impressive 2004 campaign when he hit 27 homers, knocked in 106 RBIs, and led the AL in OBP, all of which was good enough for 5.4 WAR and a Silver Slugger at shortstop. Comparatively, his time with the Mets was short--just 145 games over 1999 and 2000. However, he did accomplish a few things in a Met uniform that are worth remembering on this occasion. Several Mora-related images from the 1999 season are imprinted in my mind, and I'm sure the same is true of many Mets fans' minds.

Melvin Mora made his MLB debut on May 30, 1999, at the somewhat advanced age of 27, and spent much of the year riding the shuttle between Norfolk and Queens. He appeared in 66 games during the regular season, but logged only 39 plate appearances, as he was most often used as a late inning defensive replacement for the Mets' elderly outfield, while getting the occasional start to spell the various members of The Greatest Infield Ever.

At the tail end of the 1999 season, the Mets went into a horrific tailspin, losing 7 in a row and 8 of 9 games at the worst possible time. When their final series of the year began--hosting the Pirates at Shea--they were two games out in the wild card hunt behind the suddenly surging Reds. The Mets then won the first two games of that series while Cincinnati cooled off against the lowly Brewers, meaning they were once again tied for the wild card lead on the final day of the season, October 3.

It was an unbelievably tense game, not only because of the implications of its outcome but of how it played out. Orel Hershiser and the Mets' powerful bullpen kept an offensively challenged Pittsburgh team at bay, but the Pirates' rookie starter Kris Benson managed to limit the damage as well. Every inning, it seemed, the Mets had an opportunity to take a lead but failed to do so. On WFAN, an exasperated Gary Cohen wondered, "How many times can the Mets set the table without sitting down to eat?" The score was deadlocked at one run apiece in the ninth, and seemed like it would stay that way forever.

Mora came into the game in the seventh, pinch running for Rickey Henderson, who was dealing with some back issues. He took over Henderson's spot in the outfield, then got things started in the bottom of the ninth with a one-out single, only the fifth hit of his young MLB career. Alfonzo followed with a single, moving him to third. With the winning run at third, the Pirates elected to walk John Olerud to load the bases, even though it meant they'd have to face Mike Piazza. Pittsburgh called on sidearmer Brad Clontz, hoping he could induce an inning-ending double play.

As fate would have it, Mora was one of the few people who could've possibly foreseen what happened next. He'd played with Clontz in the Mets' system, and was familiar with his array of pitches. Before Clontz threw his first pitch to Piazza, Mora snuck a peek at his grip. He could see Clontz was preparing to throw a slider, and he also knew that Clontz's slider tended to bounce.

That is exactly what it did. Clontz's pitch hit the dirt well before the plate, and took a bounce back toward the Mets' dugout. Piazza, who no doubt hoped he could play hero, threw up his arms in the air as if to say, You gotta be friggin' kidding me...Mora raced toward home to score the winning run, then slowed down and almost duck-walked to the plate, just to make sure that he had, indeed, scored, and that maybe the Mets' stretch of terrible luck was finally over.

Mora's teammates stormed the field and mobbed him, even though their ultimate fate was still undecided; horrible weather in Milwaukee had already delayed the last Reds-Brewers game and would do so for several hours more. But the Mets would live to play another day, and Mora was a big reason why.

The Mets celebrated on the field, despite not knowing where they were headed next, because this was the culmination of a week during which they taunted death numerous times and lived to tell the tale. I wrote an exhaustive look back at this game for my 1999 Project, though Greg Prince at Faith and Fear in Flushing's recent retrospective was a lot more succinct and artful. This clip from the 1999 highlight film (Amazin Again, narrated by Tom Seaver) sets the scene well, as does this fantastic call of the play from Gary Cohen and Bob Murphy.

Somewhat surprisingly, Mora made the Mets' postseason roster when they finally, officially made the playoffs (perhaps as insurance for Henderson's back woes). He was largely invisible in the division series against the Diamonbacks, but reemerged in the NLCS versus the Braves.

Mora hit his first major league homer in game two of that series. It was a losing effort, as were all of the first three games, each loss more gut-punchingly awful than the last. In game four, the Mets clung to a slim 1-0 lead on a John Olerud homer and some amazing pitching from Rick Reed, until Atlanta went ahead 2-1 on successive solo shots from Brian Jordan and Ryan Klesko in the top of the eighth.

In the bottom half, Roger Cedeno led off with a single, but Rey Ordonez (for not the first or last time) turned in a pitiful sac bunt attempt, and Benny Agbayani struck out. Mora (once again a defensive replacement for Henderson) turned in a surprisingly strong at bat and worked a walk. With Olerud up next, the Braves brought in John Rocker. He'd been death on Mets hitters, but especially on their lefty batters; Olerud had yet to get a hit off of him.

That's probably why the Braves didn't even attempt to throw out either Cedeno or Mora when they executed a double steal. (Neither runner slid into their respective bag, because they didn't have to.) Though this gamble put the go-ahead run in scoring position, the idea that Olerud could get a hit off of Rocker seemed ludicrous. But Olerud managed a little bouncer up the middle that shortstop Ozzie Guillen made a desperate lunge for, only to see it clank off his outstretched glove and trickle into the outfield. (In a rare bit of good luck against the Braves, Guilled had just entered the game in a double switch; the man he replaced, Walt Weiss, might have been able to make the play.) Cedeno scored, and Mora raced in right behind him. The two men leaped for joy and embraced mid-air while Rocker fumed on the mound, thus creating what is possibly my favorite Mets photo ever. 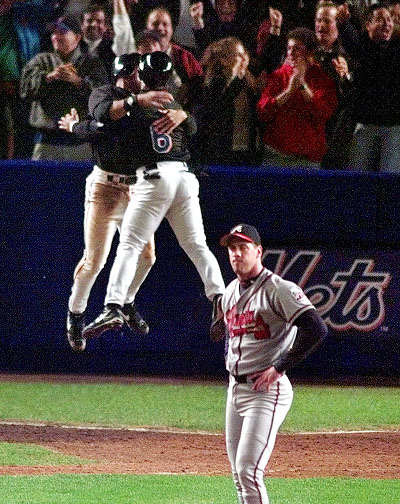 The Mets held on to win, 3-2. If you wish the see the action in real time, the clip below has all you need, though you may also opt to listen to another great WFAN call as well. 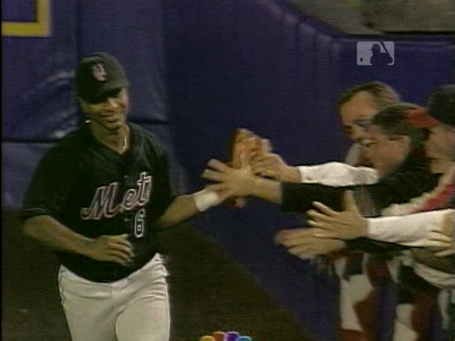 Mora also appeared in the epic Grand Slam Single game the next night (who didn't?), playing all 15 grueling innings. He did not manage any heroics with his bat or legs, but he did execute a clutch play in the top of the 13th. With two outs and Keith Lockhart on first base, Chipper Jones hit a double down the right field line. Lockhart was not fleet of foot, but the outfield grass was quite soggy, and so when the ball rolled toward the corner, the Braves decided to send him all the way home, in a desperate attempt to score a run in a game that seemed it would never end.

Standing in their way was Mora, who was able to cut off the ball perfectly and fire a throw back to Alfonzo. Fonzie relayed it to Piazza, and despite a hard collision at home plate, Lockhart was out by a mile. As Mora ran back to the dugout, grateful fans down the right field line held out their hands for high fives, and the outfielder obliged. (The import of the situation made this a much more acceptable display of emotion than Lastings Milledge's.)

In game six, a Mora pinch hit single in the top of the eighth gave the Mets an 8-7 lead, capping an unlikely rally that stunned Atlanta. It was one of many teases that gave fans hopes the team could pull off the kind of comeback no team ever had and force a game seven. But as we all know, that lead did not last long, nor did Mora's Mets career. He continued to platoon for a good chunk of 2000, primarily in the outfield again. A season-ending injury suffered by Ordonez should have opened a door for a starting gig, but Mora struggled at the plate and in the field, and the playoff-hopeful Mets didn't want to wait out his growing pains.

He was shipped off to Baltimore at the trade deadline for Mike Bordick, a veteran shortstop who was enjoying an offensive resurgence that season. Bordick continued his brief surge upon arriving in New York, then promptly did nothing throughout the playoffs. Mora remained a utility man for the most part until 2002, when his bat suddenly caught fire, thus making the trade look even more shortsighted in retrospect.

Mora would never play in the postseason again after 1999, or in any real pennant races for that matter, unless his time with Arizona last season counts. (Considering he lost his job to Ryan Roberts and was eventually released, I'm gonna say it doesn't.) Perhaps it's just as well. When you've played a part in these kind of moments, really, what could possibly top that?