Getting to Know the New Mets Bullpen

Share All sharing options for: Getting to Know the New Mets Bullpen

The bullpen might not have been the Mets' lone weakness this season, but it would have been awfully difficult not to notice how bad it was.

Despite a general decrease in offense around the league, the team's relievers ranked 28th in baseball with a 4.33 ERA, 17th with a 3.98 FIP, and 22nd with a 4.03 xFIP. They also ranked 19th in walks per nine innings, giving away bases on balls at a clip of 3.78 per nine innings, a rate which they could not negate with the good-not-great strikeout rate of 7.96 per nine.

Fangraphs totaled the bullpen's wins above replacement at 0.6, ahead of only the lowly bullpens of the Twins and Astros, both of which were negative. The best bullpens this year by the metric, for what it's worth, were the Red Sox at 7.7 and Yankees at 7.0.

There's no question that the bullpen was a weakness, and Sandy Alderson made it clear at the outset of the offseason that he intended to address the issue. Last night, he acquired three new relievers. Frank Francisco and Jon Rauch were signed as free agents, and Ramon Ramirez was one of the two players acquired by the Mets in the trade that sent Angel Pagan to the Giants.

All three pitchers are right-handed and over the age of thirty: Francisco is 32, Ramirez is 30, and Rauch is 33. If yo umissed out on the details, they're as follows: Francisco was signed to a two-year, $12 million contract, Rauch was signed to a one-year, $3.5 million contract, and Ramirez is entering his third and final year of arbitration. The commitments to these pitchers are all very reasonable, with Francisco's two-year deal the longest. All three could easily have trade value this season or, in the case of Francisco, next season.

With age comes an inevitable decline in physical performance, but these three pitchers aren't exactly ancient, even by baseball standards. Let's have a look at their average fastball velocities since 2007. 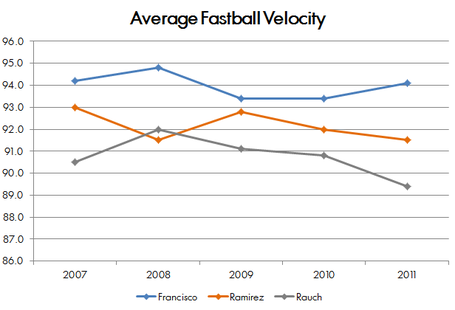 Francisco clearly throws the hardest, but only Rauch has seen his average fastball dip below 90 mph. That decline is cause for some concern since it's been happening each of the past three seasons, but it does not seem out of the realm of possibility that it will bounce back a bit in 2012.

At his best, Rauch doesn't strike out opposing batters at the same clip as Francisco or Ramirez, but he's kept his walk rates very low for the past several seasons. Let's see how all three pitchers' rates compare to the 2011 Mets. 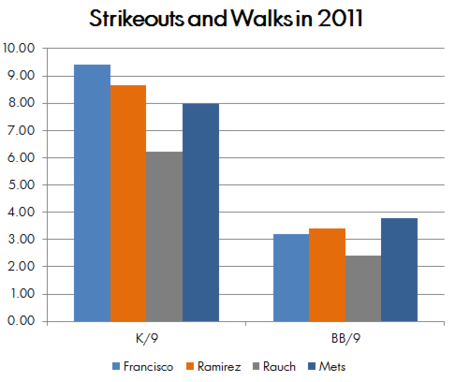 One of the most frustrating things about watching the bullpen this season, aside from the generally poor results, was its propensity to issue walks. All three of the new pitchers have shown an ability to keep walks at reasonable levels. Since they'll probably pitch about half of the bullpen's innings this year, that rate figures to improve from this season.

In the strikeout department, only Rauch came in lower than this season's bullpen with the lowest rate he's had in years. That adds to the concern about his dip in velocity, but thanks to his above-average control, his success the past few years has not completely relied on his ability to generate strikeouts. While his strikeouts have fluctuated on a yearly basis, it seems his effectiveness depends much more on whether or not he allows home runs. In his best years, he's allowed very few home runs.

Francisco's strikeouts were actually down a bit from his career number this season, but they were still pretty good. Ramirez, on the other hand, struck out batters a little more frequently this season than he has in the past. If both move closer to their career numbers, they'll probably just about even each other out.

Since all three pitchers are right-handed, it might be worth taking a look at whether or not they're effective against left-handed hitters. 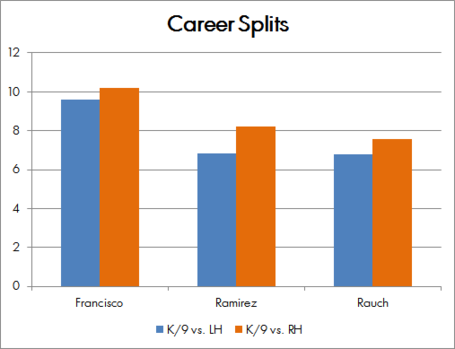 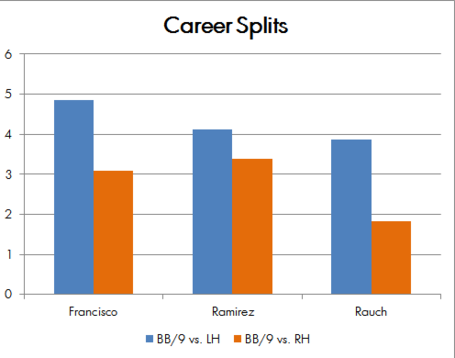 Well, all three have pretty typical splits. Their strikeouts are lower and walks higher against left-handed hitters. None of them will be rendered useless against lefties, but there's still obviously a need for Tim Byrdak, who was outstanding against such hitters, in the bullpen.

All in all, the Mets quickly constructed a reasonably-priced bullpen, finalizing all three acquisitions in the course of what seemed like ten minutes on Tuesday night. If the season were to begin tomorrow, the three new pitchers would probably be joined by Byrdak, Bobby Parnell, Manny Acosta, and either D.J. Carrasco of Daniel Ray Herrera in the pen. For a team that struggled pitching in relief this year, that should be a significant step up.