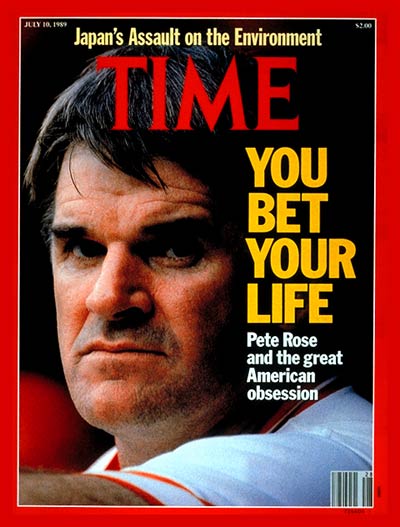 I never saw Pete Rose play, unless you count grainy footage of him plowing into Ray Fosse, sucker punching Buddy Harrelson, or acting very badly in Aqua Velva commercials. Perhaps I'd feel differently about him if I had. It seems that folks from older generations have sympathy for him, even if they think betting on baseball is a pretty heinous thing to do. And in a purely abstract sense, it does seem a shame that the all-time hits leader is not in the Hall of Fame.

But as I said, I never saw Pete Rose play, so I have no fond memories attached to that bowl haircut. As such, I firmly believe he has only himself to blame for his absence in Cooperstown, and if he never gets in, that would suit me fine.

Harsh words, perhaps. But I have zero sympathy for the man, especially whenever he opens his mouth in order to place his foot inside, as he did while talking about a new documentary about his life.

Actually, the documentary does not cover his entire life. Just the good parts. The documentary--4192: The Crowning of the Hit King--focuses on his pursuit of Ty Cobb's record and appears to have been made with Rose's full cooperation. That's why you won't hear anything about the sordid end of his baseball career: the gambling allegations, his troubles with the IRS, and his banning from the game.

"We didn't want any of the reinstatement stuff, the gambling stuff, the commissioner's stuff in there," Rose told USA Today. "That's old news." Of course, this begs the question, if the "gambling stuff" is old news, doesn't that make him breaking the hit record even older news?

But that's not the dumbest thing Rose says about the documentary, or himself. As Rob Neyer pointed out, Rose has the testicular fortitude to say that what he did was not as bad as players using steroids.

"What I did and what the guys who used stuff did -- they were both bad," Rose says. "People say the most sacred thing about baseball is the records and taking performance-enhancing drugs (impacts that). What I did I did because I wanted my team to win every single night. It was wrong -- absolutely wrong -- but I don't like to compare."

Pete Rose bet on baseball. Pete Rose bet on his own team. He insists he only bet on the Reds to win, but considering he's changed his story innumerable times since the accusations first surfaced, why would we believe anything he says?

Pete Rose bet on baseball. I repeat this because I feel that some people ignore or forget just how insanely dangerous betting within sports is. Gambling is banned in every single major sport for one reason: To keep the sport a sport. There are two things that make sports compelling to watch: 1) unpredictable outcomes, and 2) all participants trying their hardest to win. When players (or coaches/managers) gamble, it removes both of these factors.

You can say whatever you want about players who use performance-enhancing drugs. But those who do are trying to perform at their best. Whether that constitutes an unfair advantage or not is up to you to decide. Considering that baseball did not have an articulated or enforced policy against what we now define as PEDs for a very long time, presumably anyone could have used them, thus essentially giving no one an advantage. Baseball has a long tradition of honoring the adage that "if you can get away with it, it ain't cheating." Just ask Gaylord Perry or Mike Scott.

But even if you want to say that PED users corrupted the record books, there is no way that's just as bad as someone who puts himself in a position where it may not be in his best interest to do his utmost to win a game. That is what Pete Rose did. And he did it while he was a manager, while he had direct control over an entire team. Who played and who didn't. When to pull pitchers and when to leave them in. To me, this is simply staggering.

What blows my mind the most: Rose says, What I did I did because I wanted my team to win every single night. Is he saying that his uncontrollable gambling addiction enabled him to play or manage better? Because that is straight-up koo-koo bonkers. And is also exactly the kind of thing that a hopeless addict (regardless of addiction) would say. ("I drive better when I'm drunk!")

Speaking of which, Rose gets on his high horse about steroids, but as Neyer also pointed out, he almost surely partook of another PED: amphetamines. Use of this now-banned substance was rampant in baseball in the 1960s and 1970s. Back then, it was okay to take them to get revved up for doubleheaders or day games after night games. Nowadays, they're illegal. If Rose didn't use speed, he would have been in a very small minority.

Maybe this seems like kicking a man when he's down, but I have zero sympathy for Pete Rose. He's never been honest about his transgressions. He chose to accept a ban from baseball so that the commissioner's office wouldn't pursue the gambling allegations, then proceeded to whine for the next 20 years about how unfair this was. And, again, he bet on his own team--52 times in 1987 alone, according to the Dowd report, to the tune of $10,000 a day.

You can decide for yourself if this makes him a tragic figure or just morally bankrupt. But insisting what he did is not as bad as doing steroids is insane.