AKA thoughts on topics unworthy of separate posts.

1. I'm really trying to avoid pulling an Andy Rooney in this space but sometimes it's warranted. Every other post this week by various Mets blogs in my Google Reader had a similar theme -- "Why hasn't [lightning rod player] showed up early to Mets camp? Why doesn't [lightning rod player] care as much as David Wright and Daniel Murphy?" My response: does it matter? What's important is how players look and perform once camp officially starts. For all we know, the players who haven't yet reported are working harder than those in Port St. Lucie. And maybe some of the guys who have reported are drinking margaritas by night and practicing hungover by day.

Additionally, the four players generally lambasted for not showing up (and their supposed lack of caring) -- Carlos Beltran, Jose Reyes, Oliver Perez and Luis Castillo -- are in contract years. They have extra incentive to be in the best shape of their lives. Do people really think Beltran is sitting at home on the couch eating eclairs instead of working out? Or that Reyes participating in an event encouraging kids to go to school means he isn't taking his job seriously? Please. Some fans seem to care more about appearances than anything, as if an extra week in Florida will make all the difference this season. It's great that Murphy means business and showed up early, but it won't matter much if he can't field second base worth a lick and repeats his 2009 OBP of .313. I'm guessing the complaints are borne out of a paucity of Mets stuff to discuss. Hopefully once camp starts the whining will end. And so will my whining about whining.

Also, Reyes says he's put on some muscle this offseason and re-gained his trademark speed. And "sources" say Beltran is near 100%. I suppose it's best to take these with a grain of salt, just like every hopeful spring training puff piece. Regardless, the news is better than nothing and monster years for Reyes and Beltran would be glorious.

2. Good job this week by Dave Cameron at FanGraphs for his posts about DIPS anomaly Matt Cain (see post #1, post #2 and post #3). The Giants hurler has drastically outperformed his peripherals in 1000+ career innings -- his BABIP and HR/FB rate are consistently below average, both at home and on the road. As a result, aspiring SABRs everywhere have constantly referred to him as lucky, overrated and destined for ERA regression. But as a True SABR, Cameron dug a little deeper into the numbers, discovering that righthanded Giants pitchers have maintained a low HR/FB rate over thousands of innings. This led to questions about whether the Giants have some organizational philosophy or method to help pitchers suppress homers. Additional questions trump definitive conclusions. Cameron didn't simply use xFIP as a blunt weapon to end a discussion. He researched an outlier and discovered something really cool. Well, cool in the context of baseball nerdery.

3. The rumor, or whatever it was, that Rays owner Stuart Sternberg might be interested in buying the Mets was met with a certain amount of derision by parts of the Mets Internets. Fans worried that he would run the team like a small market franchise based on his ownership background, dooming the Mets to years of Rays-esque $70 million payrolls. I say bollocks to that. Sternberg would be a dream owner. He's from New York, a Mets fan and has been a large part of the Rays' turnaround in the late 2000s. I'm speculating here but finance guy Sternberg likely understands the difference in revenue outlets between the Rays and the Mets. Methinks he would run the Mets like the big market bully they should be. He is also known for not meddling with the front office. Sternberg for owner! 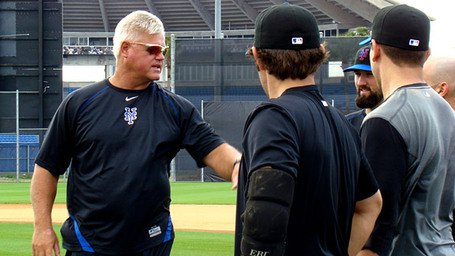