Pitchers and position players are all expected to report to Port St. Lucie this weekend, with the exception of visa-delayed Ronny Paulino. Players competing to be a part of the 2011 Mets will soon be together. The next five weeks or so will see various battles for roster spots, specifically on the pitching staff and at second base. With an obvious caveat that anything can happen between now and April 1st, here is an early spring training Opening Day roster projection: 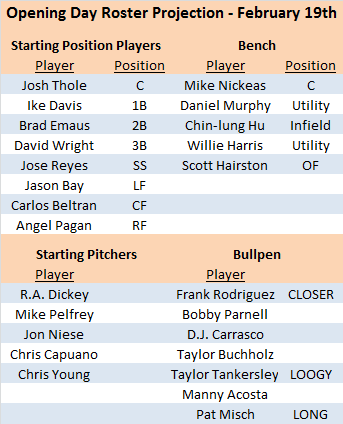 I have semi-serious reservations about Daniel Murphy's ability to play second base. Maybe he'll prove me wrong. Murphy makes the team as a reserve, mostly playing third base and first base. Maybe he wades back into the outfield, where his defensive struggles were blown way out of proportion in 2009. Brad Emaus wins the starting second base job and plays most games there. Luis Castillo is 86'd, while Justin Turner and his remaining options head to the minors.

The Carlos Beltran/Angel Pagan center field decision will be made well before the season opener. If Beltran is healthy and can play an average center field then the job is his.

Mike Nickeas is a placeholder for Ronny Paulino, who must sit out the first eight games of the season due to a PED suspension. Willie Harris makes it over apparent afterthought Nick Evans, who might never again play a big-league game for the Mets. Evans is out of options, meaning he must pass through waivers if he doesn't make the roster and the Mets want to send him to Triple-A Buffalo.

The back end of the rotation is filled by Chris's Capuano and Young. Dillon Gee starts the year in the minors and it would be surprising if he doesn't log at least a few dozen innings for the big club. Injuries and ineffectiveness happen, especially to this crew.

As Chris detailed on Thursday, the bullpen after Frankie, Bobby Parnell and D.J. Carrasco is a question mark. Assuming Taylor Buchholz's arm works, he probably makes it. One of the LOOGYs in camp -- Taylor Tankersley, Tim "The Byrdman" Byrdak, Mike O'Connor -- also has a place, with Tankersley the current pick. Ask me again tomorrow, and you shall find Tank a grave man. At least in regard to my roster projection. Manny Acosta is out of options and Pedro Beato is a Rule 5'er -- pick your poison. Acosta wins out today. Pat Misch hangs on as the long man. The six man bullpen dream is of the pipe variety.

Again, hamstrings get tweaked, trades happen and players inexplicably lose their skills. Nothing is guaranteed this early. But on February 19th, this is a reasonable look at the Opening Day roster.