Share All sharing options for: Sandy Alderson: "Stolen Bases Are A Footnote"

Sandy Alderson was interviewed at a charity event last night by Ed Randall of Fans For The Cure, a prostate cancer awareness organization. David Lennon of Newsday shared some of Alderson's one-liners. Here is one: 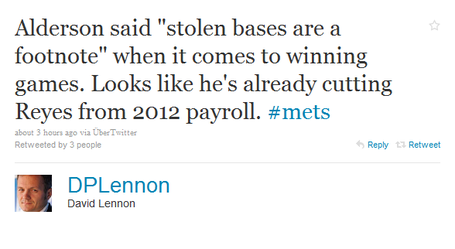 I'll ignore Lennon's Reyes editorial for now and instead focus on the stolen base quote. Alderson is right -- the importance of the stolen base for scoring runs is minimal, compared to not making outs and hitting for power. The risk of making an out on the basepaths is generally greater than the reward. A stolen base percentage less than about 70% damages a team's chances of scoring runs. Additionally, the peripheral effects of base stealing -- getting in the pitcher's head, worrying the defense -- appear to be marginal. Good on Alderson for countering the usual old baseball wisdom, which usually goes something like: "It's better to make outs on the basepaths than not be aggressive at all".

That said, the Mets have been an elite base stealing machine over the last few seasons. And that's despite the occasional baserunning blunder from Angel Pagan or Jose Reyes on which many fans seem to fixate. Those two, plus Carlos Beltran, Luis Castillo and (until recently) David Wright, have been racking up stolen bases in large quantities with tremendous success rates. Here is a happy table to look at, featuring stolen base-related Mets stats since 2006:

The table is generally self-explanatory, but I'll clarify that the NL Rank column represents the Mets' NL rank for total stolen bases, not stolen base %.

The Mets have been in the top two in the National League in stolen bases and above average in stolen base % each season since 2006. This is an area at which they excel and similar performance going forward would be most welcome. Yes, stolen bases are a footnote, but eliminating them from the Mets' arsenal in 2011 would be a mistake.

As a proponent of of the search for objective knowledge in baseball, Alderson's comment is refreshing. As a Mets fan, it worries me just a tiny bit. Hopefully Reyes and co. are not put on a leash. The worry is only tiny because this front office is known for paperwork; for performing sufficient due diligence. If I, a basement-dwelling Cheeto-eater, notice the Mets' recent base stealing prowess then surely d3p0 and J.P. Ricciardi do too. So for now I'll assume Alderson was speaking more about baseball strategy in general, and less about the Mets specifically. It's something to monitor as the season unfolds though.