Hail to the Chief: Mets Edition

Share All sharing options for: Hail to the Chief: Mets Edition 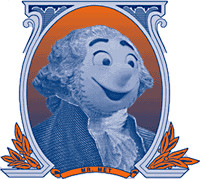 There's only one way to start and that's with the Washingtons and the Mets have had a couple. OF Claudell Washington ('80) was one of the only players to ever reach the All-Star Game at the age of 20 (with the A's) but only played with the Mets for half a season before he hit free agency. Ranger's manager Ron Washington ('79) only spent one season with the Mets triple-A affiliate in Tidewater but he did coach in the organization for five years after his playing career ended.

Moving on, infielder Russ Adams ('10-) is on board for his second season with the Bisons. The former fourteenth overall selection in '02 (ahead of guys like Cole Hamels, Matt Cain & Joey Votto) Adams' career seemed to short circuit after a somewhat promising rookie season with the Jays in '04.

Next up is native New Yorker OF Stan Jefferson ('86) who got a ring for his September call-up in 1986 but was traded away that winter in the Kevin Mitchell deal. Jefferson actually grew up a stone's throw away from Shea Stadium in the Bronx's Co-Op City and was a first round selection -- 20th overall -- by the Mets in '83. Jefferson's career never really took off and after he crossed the picket line as a replacement player for the Mets in 1995 his career in affiliated baseball was pretty much over. It is worth noting that Jefferson joined the NYPD after his baseball career and worked at Ground Zero extensively following 9/11, contracting respiratory problems as a result. Extra points for Jefferson as he graduated from Harry S. Truman High School in the Bronx.

We already had an Adams but how about a Quincy? Well, if you were paying close attention in '09 you may remember the brief appearance of one Emil Quincy Brown ('09). He only played in three games before being cut and was part of that embarrassing double play where he overran Luis Castillo on the base path.

Next up are a trio of Jacksons: There was journeyman OF Darrin Jackson ('83) who is currently a color man for the White Sox TV broadcast. There was also pitcher Roy Lee Jackson ('77-'80) who pitched in his first four season with the club. And finally there's the lefty Al Jackson ('62-'65 & '68-'69) who was a founding member and pitched through a lot of the tough times before the Mets got going. And to make matters worse, when they finally did get good in '69 he was traded mid-season and never made it to a postseason.

The Mets do have a Harrison in the fold, third baseman Brian Harrison who was a 13th round selection in 2010 out of Furman University.

Not many Polks in major league history but the Mets had an outfielder named Wes (Polk) Chamberlain at their Triple-A Norfolk affiliate in 1997, though he never made the big club.

Next we've got a bunch of Taylors. First, there was catcher Sammy Taylor ('62) who played as part of the inaugural club. Next was another catcher, Hawk Taylor ('64-'67) who appeared in the first game at Shea and also hit the first pinch hit grand slam in Mets history. His teammate Ron Taylor ('67-'71) appeared for the '69 Miracle Mets and didn't allow a hit in seven World Series innings. There was Chuck Taylor ('72) who pitched one season of relief for the club. And finally there was Billy Taylor ('99) who was the return in the Jason Isringhausen trade and went on to post an 8+ ERA in his 18 appearances with the Mets that season. Bonus points for the hometown of Monticello, Florida.

Though he only garnered three ab's with the club, don't forget 1B Brian Buchanan ('04) who was a Met for just under a week.

Next is a quintet of Johnsons. First was a couple of Bob Johnsons; one was an infielder who only played one season ('67) for the Mets after being traded from Baltimore. The other was a relief pitcher who also only played a season with the club ('69) after spending five years in their system. There was the crummy left-handed pinch hitter Mark Johnson ('00-'02) And there was Ben Johnson ('07) who made only nine appearances as a Met as part of the return in the disastrous Heath Bell trade. Not an overly distinguished group.

But then there was Hojo of course. Howard Johnson ('85-'93) was part of the '84 World Series team with the Tigers and was acquired by the Mets from Detroit before the '85 season for pitcher Walt Terrell. He was a key member of the '86 championship club and a became a franchise player in the years to come. Hadji -- as Keith calls him -- places third on the Mets all-time list of home runs, doubles, RBI's and stolen bases. Unfortunately, after an ill-fated two year run as the Mets hitting coach, Johnson recently decided to step out of the organization when he didn't quite see eye to eye with the new front office about his next assignment.

We've also got Grant Roberts ('00-'04) whose doobie-gate and resulting extortion debacle seemed to prove his presidential pedigree. His career pretty much ended after he was suspended for violating baseball's minor league steroids policy in '05.

Next up are the Wilsons, starting with Mookie ('80-'89). Obviously we all know Mookie for the greatest ground out in Mets history. He was another key contributor to the '86 squad and was a mainstay at Shea until the team was blown up in '89 and he requested a trade. Up until '08 when Jose surpassed him, Mookie held the Mets all-time mark in both stolen bases and triples. He's also managed and coach all over the organization since his playing days ended; in Brooklyn, Kingsport and at first base at Shea and soon at Citi Field. And just for your personal edification Mookie holds a commercial driver's license, you know, in case things don't pan out.

Of course there's Paul Wilson ('96) who as a member of 'Generation K' naturally flamed out due to arm injuries, appearing with the club in just one season. He was also the Mets fifth and final first overall selection and he fits right into that group, Strawberry aside of course. He settled in as a semi-reliable league average starter with the Rays and Reds. Then there was Preston Wilson ('98), the nephew and stepson of the aforementioned Mookie Wilson. The former Mets top prospect was dealt in the legendary Mike Piazza deal and though he did go on to a number of pretty productive seasons, I think we can all agree it was worth it. Last but not least was backup catcher Vance Wilson ('99-'04) who was traded before the '05 season for IF Anderson Hernandez. Wilson also amassed a total 2.5 WAR as a Met, pretty respectable for a 44th round pick.

Few organizations can boast a Nixon but the Mets ran Red Sox lifer Trot Nixon ('08) out there for 11 games in 2008 as part of the LF injury carousel started by Moises Alou.

The Mets had a couple of Carters. First came the Kid, Gary Carter ('85-'89) who the Mets acquired in a trade with the Expos after the 1984 season. Carter endeared himself to Mets fans hitting a tenth inning walkoff home run in his first game with the club. He went on to hit 32 homers with 100 RBI's that year. Carter was yet another key member of the '86 championship club. Like the others Carter found his way back into the organization as a minor league manager but after kind of campaigning for the big chair he's been stuck in the independent Golden Baseball League ever since.  Then there was the return for Billy Wagner, the Animal, Chris Carter ('10) who despite one hell of a no-nonsense demeanor and the kind of haircut you could set your watch to, was pretty average off the Mets bench in 2010.

There was Clinton 'Clint' Hurdle ('83, '85, '87) played third base, first base, outfield and catcher for the Mets in various seasons throughout the mid-80's, though not the big one. Rough break.

Lest I forget, we must of course recognize Ike 'Eisenhower' Davis ('10-) for his all-around likability.

And finally, I do not know of any Obamas throughout Mets history though on June 23, 2009 the Mets A-Ball affiliate fielded a team full of Baracklyn Cyclones.