Jose Reyes, His Future, And The Mets

Share All sharing options for: Jose Reyes, His Future, And The Mets

This is a big year for Jose Reyes. He's in the last year of his contract, in the middle of his peak age range, and yet has a glaring 166-PA 2009 season pulling down his resume. He's been exciting, upsetting and even forgettable at different points of his young career so far, and yet a good season would put him in the position to put his signature on a nine figure contract. Should the Mets be the team offering him that contract? Perhaps a look at some comparable players would help.

Think of modern-era shortstops that relied more on their legs than power for their value, and one name might immediately come to the fore, especially in New York. Crosstown hero Derek Jeter perhaps? He seems to be a good comp even if he walks more and is a worse defender than Reyes (and has also never had as empty a season as Reyes did in 2009). He's an athletic player that would suffer greatly from a leg injury, it seems.

Run a query on Baseball-Reference asking for shortstops under 28 that stole 30 bases and hit more than 10 home runs and fewer than 20, and you only get 20 player-seasons, of which Reyes owns four. Jeter owns one, so were were on the right track there. Jimmy Rollins owns four as well, so let's consider him a comp even though he owns more power. Finally, though Barry Larkin only appears once on the list, he only hit more than 20 home runs once in his career, didn't walk a ton until he hit 27, and had many injury-ridden seasons to his name. He seems like a great comp. Another player that appears more than once is Rafael Furcal, who might just be the best name on the list.

Now that we've found Barry Larkin, Jimmy Rollins and Rafael Furcal, is it time to eliminate our first name? Jeter did show up twice on the list, so there is a reason for him to appear here, but between his full-season debut and his year-28 season, he walked more than 7.3% every year and stole 30 bases once. Reyes walked 3.7% of the time in his rookie year and 5.1% last year - and stole 78 bases one year. Along with the defensive differences, this seems like it might be a poor comparison. Perhaps it's the benefit of hindsight, but Jeter also hasn't been as injury-riddled. He didn't have a Reyes 2009 on his resume in 2002 either.

Now, let's line up some relevant statistics for our four-man group. These numbers were all accrued before their age-28 season, and the low PA thresholds come from non-debut seasons. Reyes may have the most games, but he also started his career at the youngest age.

Jimmy Rollins seems to emerge as the best comp - except, ironically, he was the healthiest young shortstop of the bunch. Actually, maybe we should think about the recency effect - Rollins has crossed the 600 PA threshold every year but one, it's just that the one low-PA season was last year. He's been healthy! And, it looks like his performance up to age 28 actually suggested that might be the case.

Let's instead focus on the the two frailer shortstops, Barry Larkin and Rafael Furcal. Reyes actually showed more power than the two of them, but walked a little less and at least showed a similar offensive profile if you zoom out far enough. What this comparison seems to suggest, at first, is that Reyes has as much upside as any of his comps - based on his higher ISO and SB totals - but that his floor is lower - based on his 2009 PA total.

To try and show this graphically, here are the WARgraphs for the four players, courtesy FanGraphs: 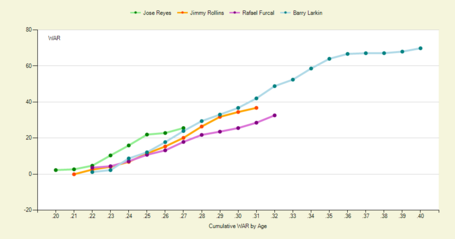 This one seems to tell us that we are on the right track. Reyes had a nice early bump, but that may prove to be his peak and his career longevity will have a lot to do with how he stacks up at the end. 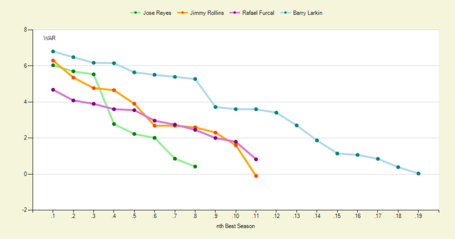 Now we see clearly that Reyes' best seasons so far have been comparable to Larkin's but that the seasons surrounding those peak three years are clearly inferior. Reyes' walk rate may have something to do with this, as that's oscillated pretty wildly so far in his career, and he hasn't hit that sustained double-digit walk rate that Larkin found at 28 years old.

It does look like Furcal, even with his injury issues, has been more consistent that Reyes so far. On the other hand, give Reyes three more three-WAR seasons, and his line would even out and come in above Furcal's, and possibly even Rollins'. Let's look at this one last way. 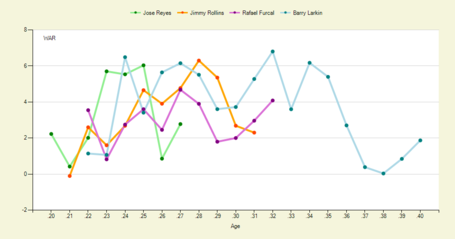 It's a little hard to read, but this is the best way to look at it, probably. You can clearly see how Reyes' peak three years were awesome, and that his 2009 valley was worse than most. With his graph being the shortest, you can see that he could easily return to the four-WAR level next year, show another good peak year or two, and end up as slightly worse than Barry Larkin. Or he could follow Rafael Furcal's pattern and show four-WAR seasons when healthy, and half of that when not. He doesn't seem to have much in common with Jimmy Rollins in this chart.

The search for comps often comes to this moment. Is Jose Reyes more like Barry Larkin or Rafael Furcal? If he's Barry Larkin, he'll improve his walk rate as he ages, and find a way to produce near his peak level in healthy seasons. Larkin had seven seasons of near-six-WAR work, Reyes has three so far. This comp should make you feel rosy inside and might make you more likely to offer the contract despite the health issues. Larkin had some health issues and turned out pretty good anyway.

Furcal didn't have the same peak as Reyes, but he's had some comparable valleys. And Furcal never hit that second gear that Larkin found - he didn't improve any core statistic the way that Larkin did when he went from 7-% walk rates to 10+% walk rates annually. If Reyes doesn't find his way back to better walk rates and better defense, Furcal's curve could have been the warning sign.

And there you have it, really. This year is about staying healthy, walking more, and playing strong defense. The stolen base and home run totals would be nice (particularly in fantasy leagues), but a 9% walk rate would really raise eyebrows and make a long-term contract in New York more likely.