Although he lived up to his reputation as a groundball pitcher in 2010, Mike Pelfrey didn't throw his sinkerball anywhere near as often as he might have hoped.  According to Andy McCullough, Pelfrey felt the pitch had little to no movement, casuing him to rely heavily upon his four-seam fastball.  McCullough notes that Pelfrey twice before experienced a season without the pitch, once in high school and once in college.

The data from Pitchf/x can be a little tricky, as it differentiated between a two-seam fastball and sinker in the 2010 season.  The data says Pelfrey used a sinker 15.6% of the time while using the two-seam fastball an additional 12.5% of the time.  Although the two pitches are really the same one, the system picked up on a difference in vertical movement, classifying the ones with more movement as sinkers and the rest as two-seam fastballs.  Pitchf/x seems to have noticed the same thing that Pelfrey did from the early stages of last season: the sinker wasn't working.

It's well-known that Pelfrey had a pretty good year in 2010 but struggled mightily in the month of July.  Turns out that's the same month in which he most frequently threw the sinker.  Correlation doesn't equal causation, but the relationship between the percentage of sinkers he threw and his overall performance is worth noting.  (Note: In the graph below, the percentage of sinkers has been divided by ten so that it's on the same scale as his FIP.) 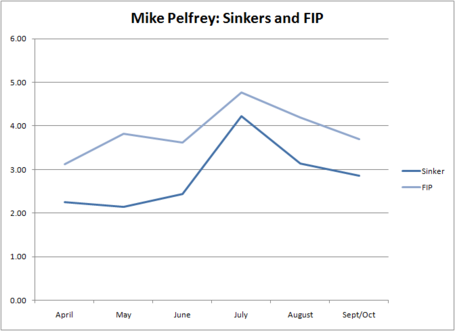 Pelfrey's performance was generally inversely proportional to how often he threw the sinker, which is an odd phenomenon for a guy who thrives on generating groundballs.  Unfortunately, it's difficult to compare the pitch to seasons prior to 2010 since Pitchf/x barely made note of either the sinker or the two-seam fastball before last year.  The data from last season does demonstrate that Pelfrey's sinker wasn't getting him the results he normally expects.

Dan Warthen and Pelfrey say that bringing back the sinker and reducing the reliance upon the four-seam fastball is big part of what he hopes to do in 2011.  Despite his ineffectiveness with the pitch last season, Pelfrey still ended the year with a 47.8% groundball rate.  That's good, but it was down from the year before and nearly two percentage points lower than his career average.

There are many factors that will determine how Mike Pelfrey fares in 2011, but the re-emergence of his sinker would likely result in a better 2011.  The fact that last year went as well as it did without the sinker should give Mets fans reason to be optimistic.  If his sinker returns and he maintains his normal strikeout and walk rates, Mike Pelfrey could outperform his 2008 and 2010 seasons.  Mets fans would gladly sign up for that.