A "Scouting Report" on Chris Capuano

Share All sharing options for: A "Scouting Report" on Chris Capuano

I watch baseball games, I promise. I'm not all about spreadsheets down here in the basement.

Now that he's on his way to Florida to join the Mets, we'll try to uncover what we can about Capuano using the spreadsheets. The caveat, beyond my limited experience watching him play, is that much of the data is also limited. Capuano missed most of the last four years, and pitch f/x has only been around, oh, about four years. Since the numbers won't help us a ton, we'll reach around the web to get the opinions of a few people who have actually watched Cappy pitch. That should help us get a feel for the new guy before he produces some actual, real-life images (and numbers!) for us Mets fans to parse.

One thing that has been pointed out before is that Capuano owns an extreme platoon split when it comes to grounders. He's a lefty, and his FIP against lefties (3.23) is much better than against righties (4.79) as is the case with most pitchers, but he gets many many more grounders against right-handed batters. Dave Allen at FanGraphs showed that he induces groundballs 54% of the time against lefties and only 37% of the time against righties. Josh Smolow (Garik16) has a theory about that, but let's not ruin that piece for the Annual just yet.

Looking at the limited data that we do have, it's nice to see that Capuano regained his velocity post-surgery (still around 87 MPH for the fastball), but it's often control that can take the longest to return. These FanGraphs heat maps for his fastball come from small sample sizes to be sure. Still, one thing that leaps out is that the cluster in the middle of the zone against righties is not so exciting. It looked like he could hit the corners a little better in 2007 - or at least avoided the "right down the middle" pitch more often. 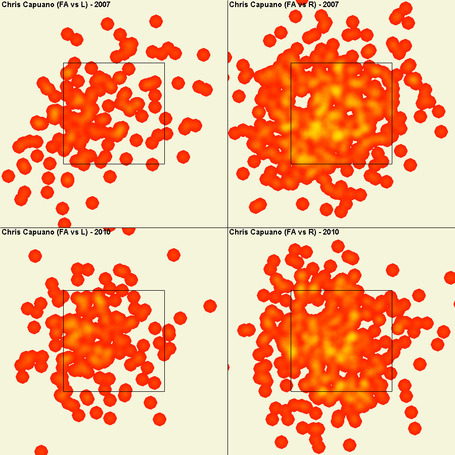 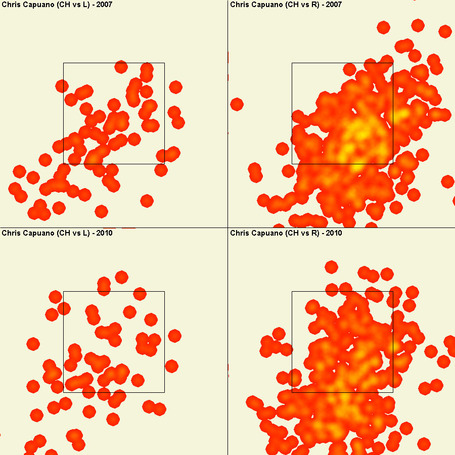 Still, he's another five months removed from surgery, and his control could return to 2007 levels without much work. so what did he look like back then? Let's turn to the Brewers fans for more help.

Cappy, when he's healthy, is a guy who can give you a lot of league-average innings - which, of course, isn't exactly anything to sneeze at. His two strong years before the second Tommy John surgery were of that variety. He gives up too many baserunners at times, which seems to be the sign of a bad streak. But Cappy's a great guy to root for. Coming back from the surgery after two years away and quietly taking to his role in the bullpen before finishing out the year in the rotation, it was hard not to root for the guy. When the Brewers let him go because there'd be no room in the rotation for him, it was sad. We all wish him well with the Mets. Now, the real question is, will he be riding his Segway to Citi Field?

After Chris Capuano's grueling struggles with injury, it was a foregone conclusion that his contributions to the 2010 Milwaukee Brewers would be negligible.  Even though our collective interest was piqued by his extraordinarily strong run through the minors - an ERA under 2.00 in seven starts - the thought was that his arm would be so weakened that it was simply his control taking him through the minors.  That wasn't the case, as Cappy put together 66 quality innings and his fastball saw a gain in velocity if anything from his successful 2007 and 2008 seasons.  He still has the great changeup, basestealers are completely neutralized against him, and his control is enough to make him a successful MLB pitcher.  His status among Brewers fans is probably inflated by his 18 win season in 2005 - he was never really great, just good - but had it not been for the Greinke and Marcum acquisitions, I would have wanted him in the 2011 Brewers rotation.

Chris Capuano was a tremendous success story for the 2010 Brewers, and it really looks like he's back at full speed. Despite having undergone two Tommy John surgeries, his velocity (mid-high 80's) was back to where he's typically been and his mix of pitches (heavy use of changeup with some sliders) was roughly the same as what it was when he was healthy and very effective from 2005-06.
With that said, I don't think Capuano made sense for the 2011 Brewers because it's impossible to predict how well he'll hold up. He pitched very well as a full-time starter in September (2.91 ERA), but only pitched into the seventh inning in two of those six starts and only worked past 100 pitches one time.
The honest truth about Capuano at this point is that nothing would surprise me. He's a very smart pitcher with a good arsenal and it wouldn't shock me to see him give the Mets 200 quality innings this year, relaunching a major league career that could go for 6-8 more seasons. But he's also a guy with a somewhat bizarre injury history, so it isn't outside the realm of possibility that he could break down in April (or sooner) and be done as a professional.

Thanks guys! I love how each of their personalities came through in these short appraisals of Capuano. In short, it looks like there's a chance we've got something valuable in Capuano this year. Something to look forward to!