Let's Go to the Audiotape: Fonzie Has a Field Day

Share All sharing options for: Let's Go to the Audiotape: Fonzie Has a Field Day 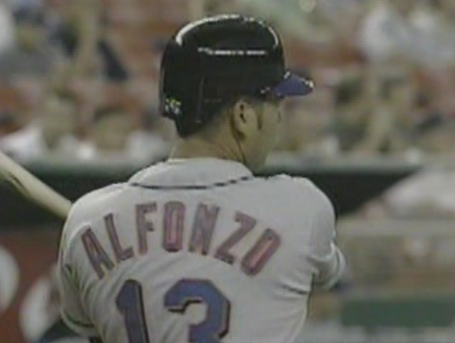 Boy, this has been a fun week, hasn't it?

With all the nonsense and mishegoss and foofara about court documents, you could easily forget that the Mets are a baseball team and not a law firm. With that in mind, let's try and remember some happier times, shall we? Specifically, August 30, 1999, and a game involving some heroics from one of my favorite Mets ever (and I'm sure of your favorites, too).

The Mets were opening up a series at the Astrodome (then in its last season as a baseball stadium). Thanks to some hotly contested games between the two teams the year before, and the Mets' standings in the playoff hunt (3.5 behind the Braves for first place, 2.5 up on the Reds in the wild card race), this was considered an important stretch of games.

The Mets started it off with a bang by administering a 17-1 pounding to the Astros, but the bulk of the damage came off the bat of Edgardo Alfonzo. The second baseman went 6-for-6, including three home runs off of three different Houston pitchers. He drove in five runs, scored six, and racked up 16 total bases, a new club record and just two shy of the all-time mark. Of course, in typical Fonzie fashion, when asked his favorite moment of his historic evening, he responded, "The last out, because we won the game."

Please enjoy this collection of radio calls from that game, as Bob Murphy and Gary Cohen describe each of his at-bats. The audio quality is not fantastic, but as with many of the videos I post here, I think its rarity trumps its technical deficiencies. And also, it is still highly preferable to hearing lawyers yell at each other.