Fred Wilpon, Bernie Madoff, And The Mets: A Timeline

Share All sharing options for: Fred Wilpon, Bernie Madoff, And The Mets: A Timeline

Daily reports are flying around about the fallout from the Mets' involvement with Bernie Madoff. It's no easy task keeping track of everything, so here is a timeline of all the Wilpon/Madoff events since Madoff's arrest back in December 2008. It consists of relevant excerpts from various news reports, blog posts and press releases, with no editorializing. This will be updated as the saga drags on.

According to regulatory filings, the Madoff firm had more than $17 billion in assets under management as of the beginning of 2008. It appears that virtually all assets of the advisory business are missing.

CNBC is reporting that Mets owner Fred Wilpon and partner Saul Katz, through their investment entity Sterling Stamos, could have lost as much as $300 million.

"The Mets are completely self-sufficient, and we have confidence that none of the other investments will affect the team," [COO of Major League Baseball Bob] DuPuy said. "They have been one of our most successful franchises on and off the field, and they are going into a magnificent ballpark next spring, and we expect it to be business as usual."

Martin Silver, owner of Syosset-based Star Industries, told the Daily News he's putting together a team of partners to make Wilpon an offer for the major league franchise.

Silver, part owner of a minor league baseball team in Wilmington, Del., said he has spoken to potential investors and estimated he could put together an offer of $600 million to $700 million for the team. Forbes magazine has put the value of the Mets at $824 million.

...he [Jeff Wilpon] said that neither his family nor the Mets would be deterred by the substantial financial losses the Wilpons absorbed through investments with Bernard Madoff...

"The team is not for sale, not a piece of it, not a part of it," Wilpon said. "We are not for sale. We have no reason to sell."

Wilpon said his family, which owns a huge portion of the Mets, would not need to recruit new minority investors to bolster the team's revenue.

Wilpon acknowledged that he has heard financial analysts say that investors like the Wilpons should have been suspicious of Madoff's operations, which turned out almost unvarying profits year after year, but he said it was easy to make such declarations after the fact.

Using a baseball metaphor, his only one of the day, he likened it to a pitcher throwing a fastball and wishing it had been a curve.

The Mets said Thursday that despite the prominence of the principal owner, Fred Wilpon, his family and his businesses on a 162-page list of the victims of Bernard L. Madoff's suspected $50 billion Ponzi scheme, the team remains financially sound.

"As we have said before on numerous occasions, this does not and will not affect the day-to-day operations and long-term plans of the Mets' organization and the Citi Field project," the team said in a statement.

Thirteen Mets accounts, some with Shea Stadium addresses, are among several hundred listed in the names of the Wilpons, the family of Fred Wilpon's brother-in-law and partner Saul Katz, and their company, Sterling Equities. The names of thousands of Madoff investors were released late Wednesday by the Federal Bankruptcy Court in Manhattan.

The Wilpon family, led by Mets owner Fred Wilpon, lost about $700 million because of Madoff, according to Erin Arvedlund, author of "Too Good to Be True," published earlier this month.

Arvedlund said she does not know the terms of the Wilpons' bank loans, but said the losses are steep enough that a sale of the baseball team is certain.

"It's qualified by when," she said. "It's possible they would have to sell by next year."

"I'm fine, my family's fine, my business family's fine," Wilpon said by telephone from Aspen, Colo., where he was vacationing. His son, Jeff, the team's chief operating officer, made similar remarks shortly after Madoff's $65 billion fraud was revealed in December. But Fred Wilpon felt the need to emphasize again that the finances of the team had not been affected.

Wilpon, who would say only that his Madoff-related investment losses were "significantly" below $700 million, said the Mets were an "emotional asset" that he was not selling. He said he would not sell even to recoup the money stolen by Madoff.

"My long-term goal has always been to have my son and my grandchildren involved with the Mets, if they choose to be, and Jeff has chosen to be," Wilpon said. "Would I sell a building on whatever street, in whatever city? I have no problem with that. I have no emotional attachment to them."

Bob DuPuy, the president of Major League Baseball, said that the Mets' financial reports, which are filed quarterly, like those of other teams, have shown no financial distress or need to worry about the team's long-term future under the Wilpons.

(the following is a transcript of some of Howard's comments)

That information is flat-out wrong, it is false, it is highly irresponsible to be making statements like that.

Quite frankly it's very disturbing that she's continuing to articulate these false and irresponsible claims.

Mets LP, one of the team's financial arms, withdrew $570.5 million from two accounts it held with Madoff's company, $47.8 million more than it put in. The accounts were part of a list of more than 30 in which more money was withdrawn than was deposited with Bernard L. Madoff Investment Securities.

As a result, Mets LP and the others were deemed "net winners" ineligible for compensation and potentially liable to being sued by Irving H. Picard, the court-appointed liquidator who is trying to recover money lost in Madoff's $65 billion Ponzi scheme.

The new figures released in Bankruptcy Court do not mean that the Mets made money with Madoff, either. The Mets, Sterling Equities and the Wilpons had dozens of accounts with Madoff's financial firm. It is unclear how much money was in those accounts, and how they were used to help run the team, if at all.

Wilpon reiterated that he still intended to pass the Mets on to his grandchildren.

"I've always said, if it's up to me, my family will be involved for the next generations," he said. "That's all I can tell you. I can't say that about any other asset we own."

When asked if any outside factors would compel him to sell the team, Wilpon said, "No."

The trustee seeking assets for victims of Bernard L. Madoff's huge fraud on Tuesday sued the Wilpon family, the owners of the Mets, which had invested hundreds of millions of dollars in the global Ponzi scheme.

In a news release, Irving H. Picard, the trustee for the Madoff victims, said that he was engaged in "good-faith negotiations" to settle the claims with Sterling and the other defendants.

As Sterling Equities announced in December, we are engaged in discussions to settle a lawsuit brought against us and other Sterling partners and members of our families by the Trustee in the Madoff bankruptcy. We are not permitted to comment on these confidential negotiations while they are ongoing.

However, to address the air of uncertainty created by this lawsuit, and to provide additional assurance that the New York Mets will continue to have the necessary resources to fully compete and win, we are looking at a number of potential options including the addition of one or more strategic partners. To explore this, we have retained Steve Greenberg, a Managing Director at Allen & Company, as our advisor.

Regardless of the outcome of this exploration, Sterling will remain the principal ownership group of the Mets and continue to control and manage the team's operations. The Mets have been a major part of our families for more than 30 years and that is not going to change.

On a conference call that's being broadcast on SNY as we speak, Fred Wilpon has indicated that the Mets will look to sell a 20-25% minority stake in the team. Last April, Forbes valued the Mets at $858 million, which means the Mets are probably looking at an influx of $200 million or so from potential "strategic partners." Earlier I guessed that they'd need on the order of $100 million.

When asked to explain the Mets' current financial situation in the face of the Wilpons' persistent dismissal of claims that a link might exist between their involvement with Bernie Madoff and possible financial insolvency with the Mets, Jeff Wilpon replied, "Things have changed from October to now, with the lawsuit."

The trustee representing the victims of Bernard L. Madoff's multibillion dollar Ponzi scheme is seeking hundreds of millions of dollars from the owners of the Mets, alleging that they, as longtime and successful investors, knew or should have known Madoff was operating a fraud, according to two lawyers involved in the case.

The lawsuit seeks to recover not only $300 million in what the trustee, Irving H. Picard, calls "fictitious profits" - the difference between what the Wilpon and Katz entities put into Madoff's investment firm and what they took out over their many years of investing - but also additional millions...

One person is Mike Repole, who owns Kentucky Derby entrant Uncle Mo and made a fortune with the sale of Vitaminwater to Coca-Cola, according to the Daily News.

The Post countered by identifying Martin Luther King III, son of the late civil rights leader, as a potential buyer. That group reportedly also would include Ed Kranepool and Donn Clendenon Jr., son of the ex-Met. However, that group wants at least a 50 percent stake, according to the newspaper, which is not what Fred Wilpon said is for sale.

Finally, multiple reports name Martin Silver, owner of Georgi Vodka, who has been outspoken for a while in wanting to purchase the club.

The New York Mets hope to complete the sale of up to a 25% stake by the end of June, according to a person involved with the planned transaction, as the baseball team seeks funds to make up for a potential settlement related to investments with fraud figure Bernard Madoff.

Mr. Wilpon has long said that he was victimized by his longtime friend Mr. Madoff, but it is now clear his exposure is far greater than he has previously revealed publicly

The financial pressure on Wilpon will now continue to mount, and his preference to sell 20 to 25 percent of the Mets to alleviate the strain, a plan that he announced a week ago, may not turn out to be enough of a remedy.

Some sports executives and analysts said Friday that they believed Wilpon would most likely have to sell the team in the face of demands by the trustee, Irving H. Picard. David Sheehan, the lead lawyer for Picard, said "the entire Katz-Wilpon enterprise" was being looked at as assets that could be used to resolve the lawsuit. 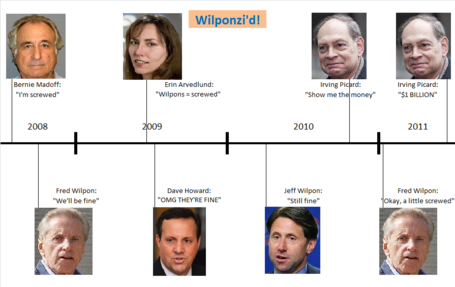