Andy Pettitte in the Subway Series: The Final Record

Share All sharing options for: Andy Pettitte in the Subway Series: The Final Record

It will be odd this upcoming season to watch the Subway Series and not have Andy Pettitte take the mound at least once. Pettitte was literally there from the beginning, as he threw the very first pitch in a regular season Subway Series game. To me, it seemed like every time this event rolled around, Pettitte would get at least one start. The record backs up that perception: Pettitte made at least one start against the Mets every year he was a Yankee except 2010. (As you may recall, he missed significant time due to injury last year.)

Therefore, I thought it only appropriate to now look back on Pettitte's record in these games. As you'll see, there's some historic, crazy games in here, a few blowouts (in both directions) and a few contests that have since been long forgotten, usually for good reason. A trip down memory lane after the jump. 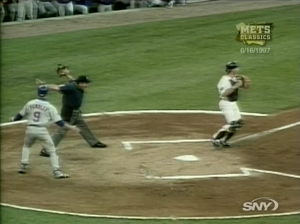 June 16, 1997: In the first ever Subway Series game, the Mets touched up Pettitte for three runs before anyone could blink. The third run scored on a botched rundown play that allowed Todd Hundley to steal home, a bizarre turn of events should have indicated to everyone that this was the Mets' night. Most of the damage to Pettitte was done by John Olerud, who knocked in a run in that first inning and hit a key two-RBI single in the seventh to put the game away.

Most shocking of all, however, was that Pettitte was outpitched by journeyman Dave Mlicki, who threw a complete game shutout in the Mets' 6-0 victory. As the game neared its close, most of the Yankee fans had left, leaving the Stadium to sound much more like Shea when the final out was recorded.*

* Note that the New York Times article linked above contends the "let's go Yan-kees!" chant was "borrowed" from the Rangers. No one would dare insinuate such a thing nowadays.

July 27, 1998: In the middle game of the first Subway Series at Shea, the Yankees (enjoying a season in which they ran roughshod over all of baseball) capitalized on errors from unlikely sources Olerud and Rey Ordonez to easily dispatched the Mets, 7-2. Pettitte went 6 1/3 solid innings in the effort.

July 10, 1999: Though he would not factor in the decision, Pettitte was the Yankees starter in this game, possibly the most exciting, ridiculous regular season Subway Series game ever. The Yankees roughed up Rick Reed and Met relievers to the tune of six home runs, though a three-run 482-foot bomb by Mike Piazza was the most impressive longball of the day and gave the Mets a brief 7-6 lead. Dennis Cook gave it right back with a two-run homer to Jorge Posada in the top of the eighth. That forced the Mets to rally against Mariano Rivera, which amazingly did, scoring the tying and winning runs on a Matt Franco pinch hit single. 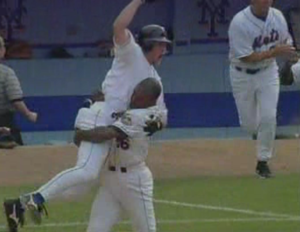 June 10, 2000: A day after the Mets roughed up Roger Clemens in the Bronx, the Yankees returned the favor by tattooing Bobby Jones for seven runs, recovering from an early deficit to win, 13-5. Pettitte allowed the Mets to go ahead 5-3, but a five-run explosion in the fifth inning put the Yankees ahead to stay.

July 9, 2000: The Mets salvaged the last game of the Shea leg of the Subway Series as Mike Hampton outdueled Pettitte, 2-0. A pall was cast over the entire game, however, as this came one day after Mike Piazza was concussed by a Roger Clemens fastball to the head.

October 21, 26, 2000: Pettitte matched up against Al Leiter in two pivotal games of the World Series. In game one, the Yankee lefty benefited from some mental lapses on the basepaths, but he also allowed three runs in the top of the seventh that gave the Mets a 3-2 lead. He would have been the pitcher on the losing side had Armando Benitez made things stand up, but we all know how that ended.

In game five at Shea, Pettitte allowed the Mets to the take a 2-1 lead on an odd rally in the second inning where the RBI hits barely made it past the picther's mound, but he settled in to go seven strong innings. His counterpart allowed a game-tying home run to Derek Jeter, then made the mistake of trying to go too far. Leiter's 142nd pitch of the night (!) resulted in a bouncer up the middle off the bat of Luis Sojo that allowed the go-ahead runs to score. Shortly thereafter, the Yankees were world champions for the third year in a row.

June 15, 2001: The teams' first matchup since the World Series featured yet another battle between Pettitte and Leiter. Pettitte lasted just 3 1/3 innings before aggravating a groin injury that landed him on the DL, while Leiter soldiered on through a difficult start. Just as in game one the year before, shoddy baserunning doomed the Mets when Piazza turned a potential game-tying rally into an out at the plate. The Yankees went on to win, 5-4.

June 14, 2002: Before this game, the Mets showed a video tribute to Robin Ventura that inspired a standing ovation and a curtain call for the third baseman. After the game, Mets fans were less appreciative. Pettitte threw just four innings and left with a 2-0 deficit, but the Yankees scratched out single runs in the eighth and ninth to tie the game, then went ahead on a two-run homer from Ventura off of Met-for-a-minute Saturo Komiyama. Yankees win, 4-2.

June 30, 2002: Rebounding from an up-and-down, injury-plagued first half of the season, Pettitte utterly dominated the Mets, throwing a complete game, three-hit shutout. His teammates pounded Steve Trachsel and the Mets' bullpen for eight runs. 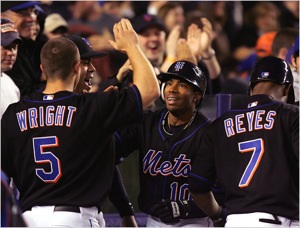 May 18, 2007: In his first Subway Series start since returning to the Yankees from Houston, Pettitte nursed a 2-1 lead until unlikely power source Endy Chavez took him deep for a two-run homer in the bottom of the fifth. Oliver Perez continued his curious ability to be Yankee Kryptonite, and Billy Wagner survived a brief scare in the ninth inning to preserve a 3-2 Mets win.

May 17, 2008: In a matchup against Johan Santana, Pettitte squandered an early 2-0 lead by allowing a Mets "rally" in which the tying run scored on a bases-loaded walk, and the go-ahead run on a dribbler up the third base line that just stayed fair. The Mets touched up the Yankee bullpen for four more runs and went on to win, 7-4.

June 28, 2008: In this rematch, Pettitte came out on top, allowing just two runs on four hits in six innings, while Santana allowed three runs on five hits. The bullpen made it stand up in the Yankees' 3-2 win.

June 13, 2009: A day after the brutal Luis Castillo dropped pop-up game, Pettitte lasted just five innings, ceded five runs, and was outpitched by Fernando Nieve (remember him?). This led to a palate-cleansing 6-2 Mets win. It would turn out to be Pettitte's last Subway Series start.