Share All sharing options for: Casey Fossum To Join Mets

Today another lefty reliever will join the Mets' organization when Casey Fossum signs what will most likely be a minor league deal. Fossum last pitched in the major leagues with the Mets in 2009, so it's a homecoming of sorts. While he joins the rag-tag bunch of lefties and may not have much upside, the signing speaks to a new organizational philosophy, and also creates a few interesting asides.

With Fossum, Taylor Tankersley, Tim Byrdak and Mike O'Connor, the team will consider four left-handed relievers that pitched a combined 38.2 innings last year - and Byrdak pitched 38.2 of those. The New York Yankees will have eight million dollars of LOOGY at their disposal, including one that the Mets used to employ, while the Mets most likely will feature one lefty reliever making the minimum. It's a new day in Willets Bay.

That isn't to say that Fossum is the fore-runner, or that the the strategy will produce even one functional major-league-quality left-handed reliever. In fact, the reports on Fossum are less than glowing.

He spent the last year in Japan, so I turned to Patrick Newman, the proprietor of the excellent NPBtracker.com, for a quick comment on Fossum:

He was pretty bad. He showed no velocity in spring training, which prompted Hanshin to pluck Jason Standridge out of an independent league. They eventually did give Fossum some innings at the top level, and he had a respectable strikeout rate but was overall very hittable. Nine home runs in 56.2 IP.

Looking at NPBtracker's pitch f/x information for Fossum, it looks like he threw a fastball that topped out at 87 MPH and settled in at 85, a cut fastball that came in about three or four MPH slower, and a slider that crossed the plate in the high seventies. He used to throw a curve almost 20% of the time in America, but the pitch disappeared for stretches in Japan, so it's hard to say what happened with it. That's an underwhelming repertoire to say the least, and it looks like he's lost velocity (and a curveball) from the halcyon days of 2009 when he hit 88 regularly with his fastball.

One more thing from Newman: Fossum was not successful as a LOOGY in Japan. Here are his splits:

As Newman added, "1 of 12 ABs against lefties resulted in an home run. Ouch." Ouch, indeed. He also pointed out that while some players that performed poorly in Japan came back last year and did okay (Dan Johnson, Chris Resop, Kameron Loe), he didn't see Fossum doing the same.

Pedro Feliciano was a great LOOGY for the Mets - his career FIP against lefties is 2.65. Not one of this group is likely to show a number that nice. On the other hand, he peaked at 156 lefties faced in a year (usually settling in around 120). Just looking at Feliciano's splits log, that number of batters faced amounts to about 30 innings of work against lefties over the course of an average full year. FIP is on the ERA scale, so those 30 innings = 3.33 'games' of lefties. The difference between a Feliciano season (saaaay, 2.75 FIP) and a good Byrdak season (saaay 3.75 FIP) might only be 3.33 runs over the course of a year.

This is back-of-the-drunk-cocktail-napkin math, assuredly. But it's likely that the difference between a really good LOOGY and a scrap-heap one is not one that a team like the Mets should be worrying about. Perhaps the new regime has this one right.

When Casey Fossum joins the team in spring training, he'll also join former Ray Dale Thayer in camp. That prompted DRaysBay writer Erik Hahmann to joke that "Brian Stokes wasn't enough" and warn Scott Dohman of an impending phone call from Sandy. This repartee also spawned the frivolous tweet below. It seems an appropriate way to end this meandering report. 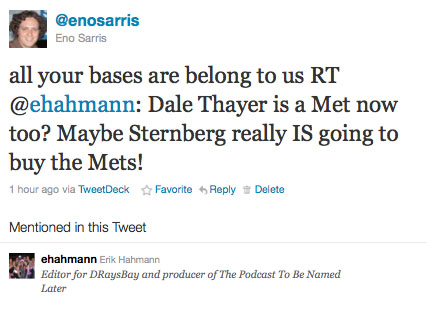