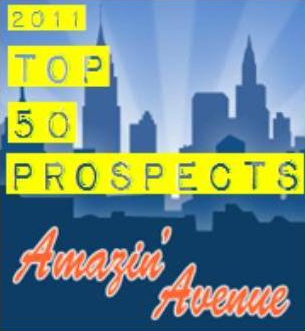 Continuing in the week-long 2011 Amazin Avenue Top 50 Mets Prospects series, today we'll look at nos. 21 through 30. As I mentioned yesterday, you can find these rankings as well as further analysis, stats and visuals in the minor league section of the 2011 Amazin' Avenue Annual.

A prep lefty that hits the low 90’s with ease is certainly exciting but after TJ in ’10 he likely won’t get fully underway ‘til 2012. With a strong fb and the makings of a decent curve & change up, Matz projects as a good lefty starter but not for quite a few years.

Another talented high school lefty, Dotson was a 13th-round steal by the Mets who bought him out of a strong commitment to UGA in ‘09. Like Matz, he projects nicely due to size (6-3, 210) and a low 90’s fb with nasty life. He'll get a late start to the year in order to complete his ’10 suspension, which was reportedly for a non-PED substance.

20-yr old shined in his US debut showcasing excellent defensive skills behind the plate as well as surprising pop from a catcher, trailing only Aderlin Rodriguez for the K-Mets team lead in home runs. Clear breakout candidate with the potential to jump up this list in ’11.

After a so-so first half with St. Lucie an aggressive promotion to Binghamton proved disastrous (see, 8.32 ERA). 21-year old lefty works in the low 90’s and piles up grounders thanks to true overhand delivery but shaky secondary stuff points to potential late-inning lefty long-term.

19-yr old made nice improvements to his offensive approach cutting K’s, walking more & showing more power before missing final 2 months with hamstring woes. Despite more errors he improved defensively and if he builds on all of this growth could break out in ’11.

Played as high as Hi-A at 18 and held his own, showing a plus-plus glove at short and solid contact skills at the dish. Small stature (5-10, 160) probably precludes much power down the road but a role as a defensively-oriented backup MI is already well within reach.

Fifth-rounder in ’10 hit the ground running in Savannah where he posted a .407 wOBA as a CF with exceptional defensive ability. He swings and misses too much and his power right now is more doubles than homers but like Tovar, a floor as a defensive 4th OF is very likely

Very athletic IF impresses scouts with tools but secondary skills are highly suspect; regularly posts BB-rates under 5%. Very raw for a 23-yr old at the plate AND in the field. Batted .355 in AFL in ’10 but also had scouts talking about poor swing mechanics & trouble with breaking stuff.

Tenth rounder in ’10 from St. Thomas wowed in pro debut in GCL; hit 95mph as a 17-yr old(!) with good feel for a power curve. Possesses special arm speed and as much potential as almost any pitcher in this system; still far away but could easily jump up this list by this time next year.

23-yr old pitched well in ’10 with Savannah, posting a 3.08 ERA with just 5 hrs allowed. Even more impressive was the 9+ K/9 paired with a sub-3 BB/9. And though he features a very strong 91-94mph fb, a spotty slurve and an undeveloped change point to relief long-term.