According to Jon Heyman:

It's not clear if Heyman is speculating or has a Mets source feeding him the info, but the language ("beato to make mets") suggests the latter. If he is correct, the Opening Day roster will look like this: 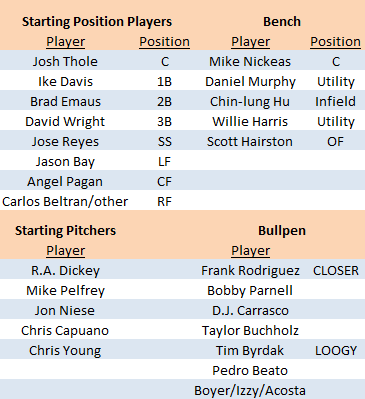 Bad news for Nick Evans, unless Carlos Beltran starts the season on the disabled list. Mike Nickeas is the backup catcher until Ronny Paulino returns from PED suspension and is deemed healthy enough to play. Heyman followed up his initial Tweet with another seemingly contradictory Tweet: 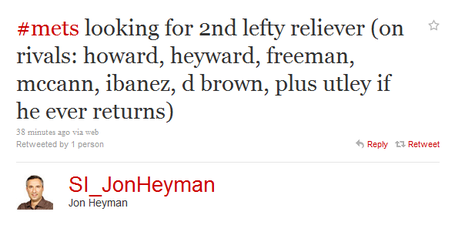 This doesn't add up. Given the bench, the Mets will carry seven relievers. Six are decided, with the seventh spot going to a righty. BUT, they are also looking for another lefty. What? Maybe Heyman doesn't have a source. Or multiple sources are feeding him inconsistent info and he doesn't realize it. Throw everything at the wall, see what sticks.

Let's try to make sense of it all. Willie Harris has been told he made the team, according to Adam Rubin. So the bench appears set. Based on all available info and simple deductive reasoning, Pedro Beato will head north with the big club. The final open roster spot is in the bullpen, and it will go to Boyer, Isringhausen, Acosta or some lefty.

On a different note, check out this brief article from The Onion, which is funny except for the part where Carlos Beltran is mentioned alongside the collapses of 2007 and 2008, trading Nolan Ryan and Frank Rodriguez assaulting his girlfriend's father. Booooooo The Onion, booooo, you're better than that!